Today after the close, semiconductor equipment manufacturer Applied Materials (AMAT) will report their fiscal Q2 results. The options market is implying about a 4.5% move in either direction tomorrow (about $2.40), which is rich to the four-quarter average one-day post-earnings move of only 2.5% and the 10-year average of 3.5%. 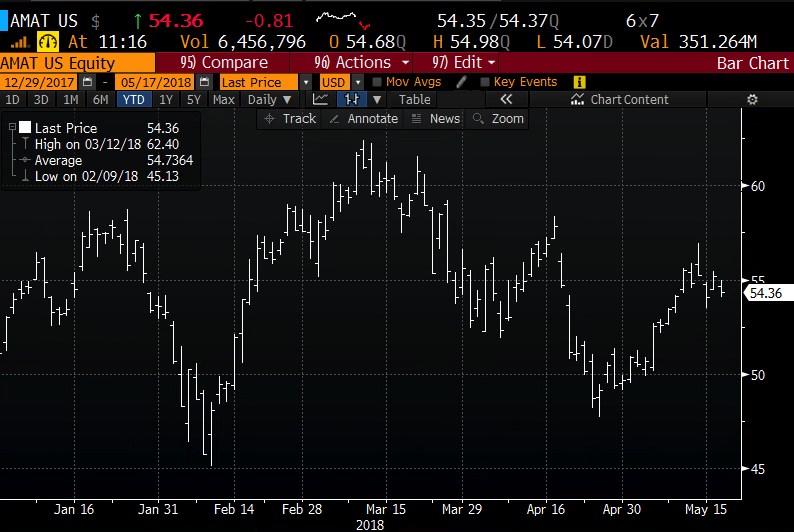 Short-dated options prices, despite being down significantly from their multi-year highs made in February, are still relatively high with 30 day at the money implied volatility (blue line below) at 36%, likely the result of 30 day-realized volatility (white line) near 40%, which is generally not a common occurrence in a $57 billion market cap company like AMAT suggesting that options prices might be fair into the print, despite looking expensive: 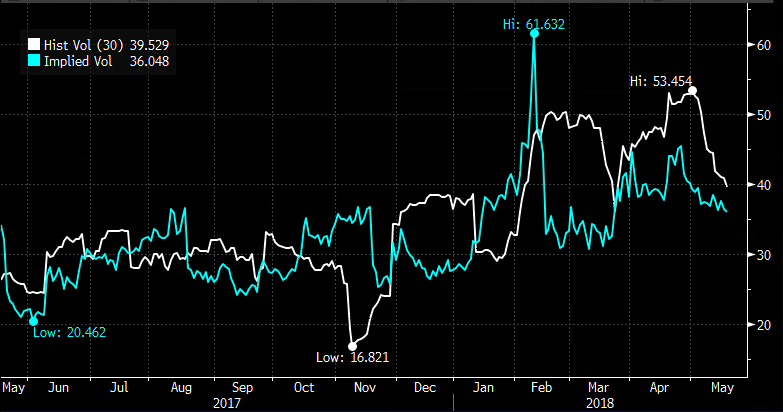 AMAT is a cheap stock trading 12x fiscal 2018 eps which is expected to grow 38% on 20% sales growth. This growth is expected to moderate in F2019 to about 4 & 5% respectively, one reason for the low multiple. In a earnings preview note to clients on May 6th, Credit Suisse Semi-Equipment Analyst Farhan Ahmad who rates the stock a buy with a $75 twelve month price target highlights the following points of interest from the call for investors:

Investor Focus is on Memory and Display Cycle: Commentary from memory companies implies that y/y growth in NAND/DRAM is accelerating in C2H. Investors are worried that this could lead to oversupply. We expect that investors’ concerns are unlikely to be eased until NAND y/y bit growth peaks and pricing bottoms (we expect in late C3Q). On Display – AMAT revenues are largely supported by Display investments in China (~70% of revs in CY18). Improvement in China/US trade relations could be positive; however, LT we see Display as a risk given Capex exceeds Cash Flow for the industry

As for valuation, Ahmad points to discount valuation at current levels:

The market is valuing AMAT at historic low multiples relative to the S&P. On a NTM PE basis, AMAT is trading at 11.1x, 26% below the 5 year average, and in bottom quartile of the historic trading ranges. AMAT is currently trading at 33% discount to S&P on NTM PE versus last 5 years average discount of 10%. On our estimates for CY18 EPS, AMAT is trading at 10.9x versus LRCX/KLAC/ASML at 10.5x/12.1x/27.5x.

So what’s the trade? The relative underperformance to the SMH is interesting despite not a large spread between ytd gains, AMAT is down 13% from its March highs while the SMH is down half that.

If I were inclined to play for a miss and guide down I would target $50 in the coming weeks.

Break-even on May 25th close:

Or if I were inclined to play for a beat and raise, targeting a one day move in line with the implied move I would consider…

Break-even on May 18th close (tomorrow):

Rationale: this is a dollar cheap way to target the implied movement to the upside offering a potential payout of 4 to 1 with defined risk.

I’ll offer our normal disclaimer for long premium directional trades into events like earnings, you need to get a lot of things right to just break-even, direction first and foremost, timing and magnitude of the move.