Cisco Systems (CSCO) will report their fiscal Q3 results tonight after the close. The options market is implying about a 5% one day move tomorrow in either direction (or about $2), which is inline with the four-quarter average of about 5% but a little shy of the ten-year average one-day post-earnings move of about 5.6%.

Shares of CSCO are massively out-performing the broad market this year, up 18% vs the S&P 500’s (SPX) 1.7% gains and the Nasdaq Composite’s (CCMP) nearly 7% gains. Just last week the stock made a new 52 week and 17-year high, having just been rejected at the prior 2018 high. The one year chart below shows the near-term resistance near $46, but also pretty healthy support near $42 at the uptrend from the one-year lows made last August. I would also add that $42 was the gap level to new 52 week highs following CSCO’s better than expected fiscal Q2 results back in mid-February: 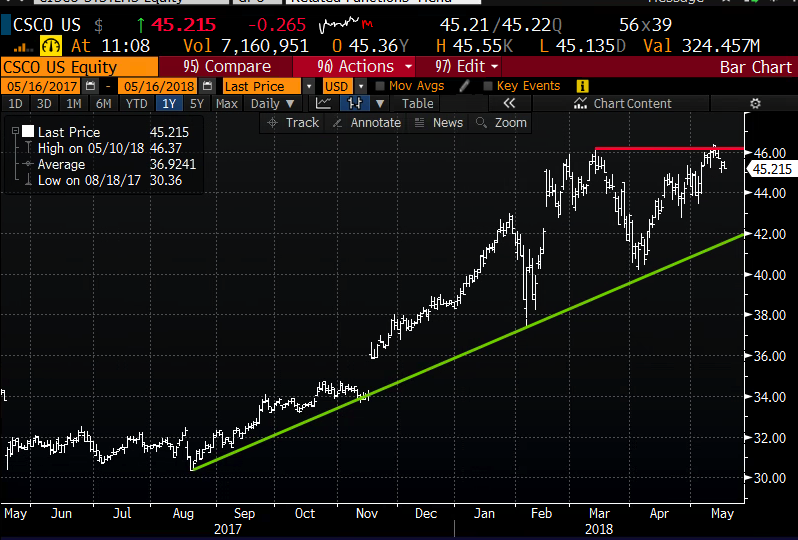 In 2017 the stock broke out of a 16-year $20 wide base and has since risen 50% with no real overhead technical resistance…. you know what famed Wall Street technician Louise Yamada always says… “the longer the base… higher in space”: 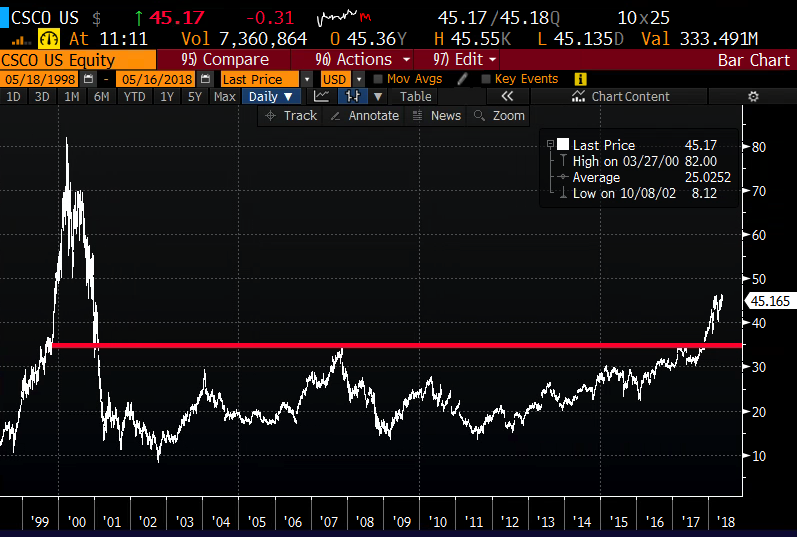 Wall Street analysts are relatively bullish on the stock with 21 Buy ratings, 11 Holds and only 1 Sell with an average 12-month price target of about $48.60. Last week Credit Suisse initiated the stock with a hold rating: 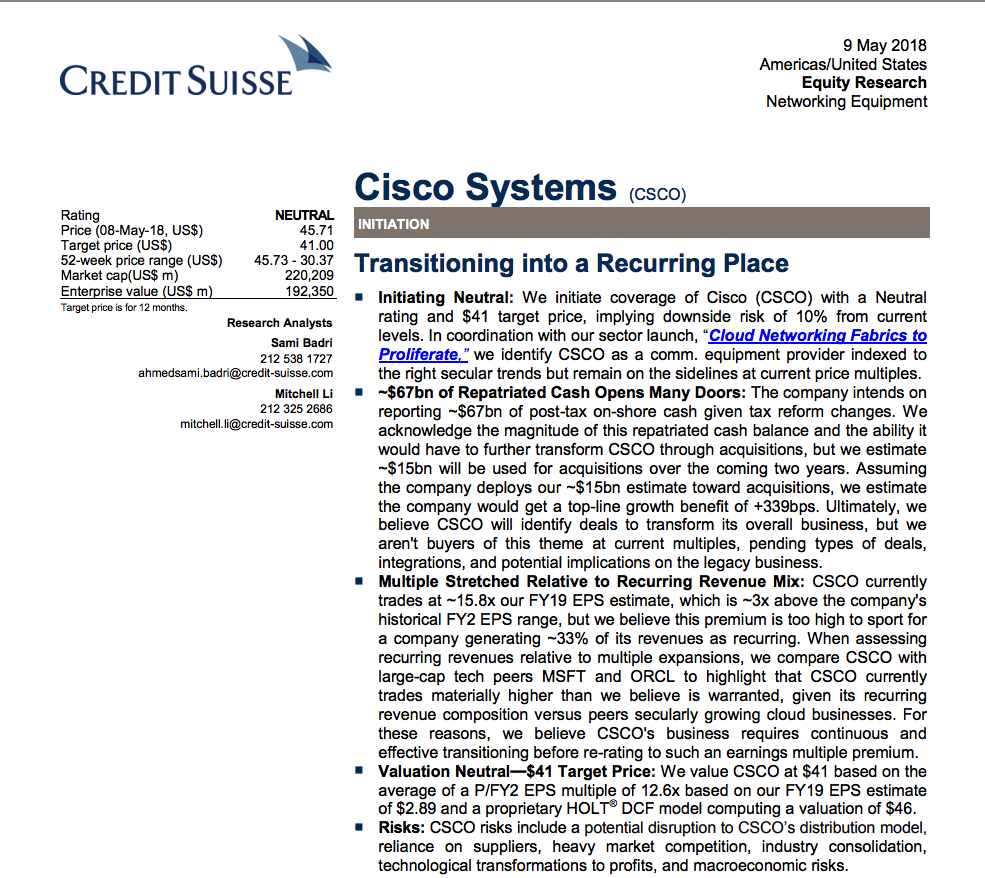 There were a couple of points in this summary that caught my eye… first that repatriation will not be a massive boon to topline growth and that the stock’s valuation is rich, based on similar mega-cap tech stocks who have seen their multiple’s expand due to confidence in recurring revenue streams. CSCO trades 17.4x expected F2018 eps growth of 8% on only 2% yoy sales growth… The balance sheet is in great shape, especially after repatriation with $74 billion in cash, $34 billion net of debt and we are likely to see pricey acquisitions as the company looks to pursue a greater share of cloud-based recurring revenue streams.

I suspect the better than expected results and guidance over the last couple quarters is the result of a roaring global economy and cap-ex expansion but given some of the data we have seen out of Europe and the U.S. that has cooled ytd, there might be a chance that CSCO’s Q3 results and forward guidance exhibit a bit of near-term caution especially given the uncertain trade uncertainty with China and the specific focus on ZTE, the telecom equipment maker in China that our trade objectives specifically included last month and have become a focus of late. CSCO could find itself on the receiving end of such restrictions from the Chinese. To my eye there is a good bit of good news priced into the shares at current levels…

If I were inclined to play for a breakout above $46 I might consider the implied move of about $2 and look to sell short-dated options there to help finance the purchase of a summer early fall breakout. For instance:

Break-even on May 18th expiration:

The ideal scenario the stock is 47 or just below. The short-dated May call will expire worthless and you help finance the longer-dated Sept 47 call.

The max risk of this trade is 1.40 in premium at risk on a sharp move below the current price or above the strike.

Rationale: this trade idea leans bullish but really plays for a near-term consolidation following results near the implied move and just above the recent highs.

Or for those who think CSCO could miss and guide down…. target the one-year uptrend on the downside near $42.

Rationale: this trade idea risks about 2% of the stock price, offers possible gains of 6.5%, a pretty decent risk-reward potential into an event with defined risk.