On Friday we previewed Apple’s (AAPL) fiscal Q2 earnings that were reported last evening (read here) and despite the controversy around iPhone units, and the stock’s recent decline, I submitted the 2018 range for the stock may in fact be set:

The stock to me is kind of in no-mans-land trading very near the mid-point of the year to date range in the low $160s. It appears to me that the stock has healthy technical resistance at $180 and considerable near-term technical support at the February panic intra-day low of $150

Given the recent rise in options prices into the print, resulting from the broad market decline and the slew of lower earnings/unit revisions, we detailed a potential yield enhancement strategy for long holders:

If you are long the stock, and you think that a guide down of June quarter might be in the stock, and the headline of a massive bump to the capital return might help offset some downside, then selling out of the money calls and puts against your long position make sense. You could just overwrite the position by selling an out of the money call, but you could also take a bit more risk and turn that overwrite into selling what is called a Strangle, selling a call and a put of the same expiration but different strikes.

Here was the example from Friday when the stock was $163:

Profits: If the stock is 180 or higher, you will have the gains of the stock…. is called away at 180, but you have also gained the $3 in premium for the Strangle sale, so essentially selling at 183

Losses: of the stock below current levels, less the $3 premium sale, so protected down to 160. The worst case scenario the stock is 150 or lower and you would be put 100 shares of stock at 150.

And detailed on Friday’s Options Action on CNBC:

AAPL has since rallied, this morning trading at $175 after yesterday’s 4.4% bounce following earnings and guidance that were better than feared which also included a $100 billion bump to their share buyback. As expected, short-dated options prices have come in hard since the print, with 30 day at the money implied volatility at 20%, down from 30% a few days ago: 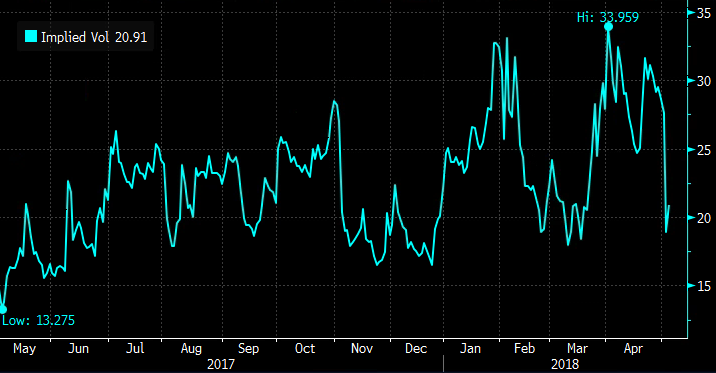 So let’s check in on the yield enhancement strategy and discuss possible adjustments. Again here was the trade idea:

Now with the stock at $175, the June 180 call can be bought back at $2.60 and the June 150 put can be bought back for 40 cents, so in total the strangle can be close for what it was sold at, despite a $12 or 7% rise in the stock. Thats a pretty astounding example of just how pumped options prices were into the print.

So what to do now? If you are long AAPL you have had the gains of the stock and have only a 10 cent loss on the sale of the strangle, You could easily just cover both the call and the put and move on. You could leave it on and think of it as an over-write if you are willing to be called away at effectively 183 if the stock is 180 or higher on June expiration. Either way the June 150 put offered at 40 cents should be covered as it has only a 5 delta and it seems way to cheap to run the risk of being put back in play in the event of a sharp decline between now and June expiration. As far as risk in leaving this strangle on vs short stock is that you are put more stock at 150 on June expiration, which the options market is saying is less than a 5% probability, and that you are called away at 183, which is not a risk as you could always just buy back the short call to keep the long position in place.

This overlay costs nothing,

Profits in stock up to 185 between

Rationale: the likelihood of the stock above 185, which would be above the prior all time highs made in March are not great, which makes the 185 call sale attractive vs long stock imo.

On the downside, 165 looks like a good near-term level to have protection below: 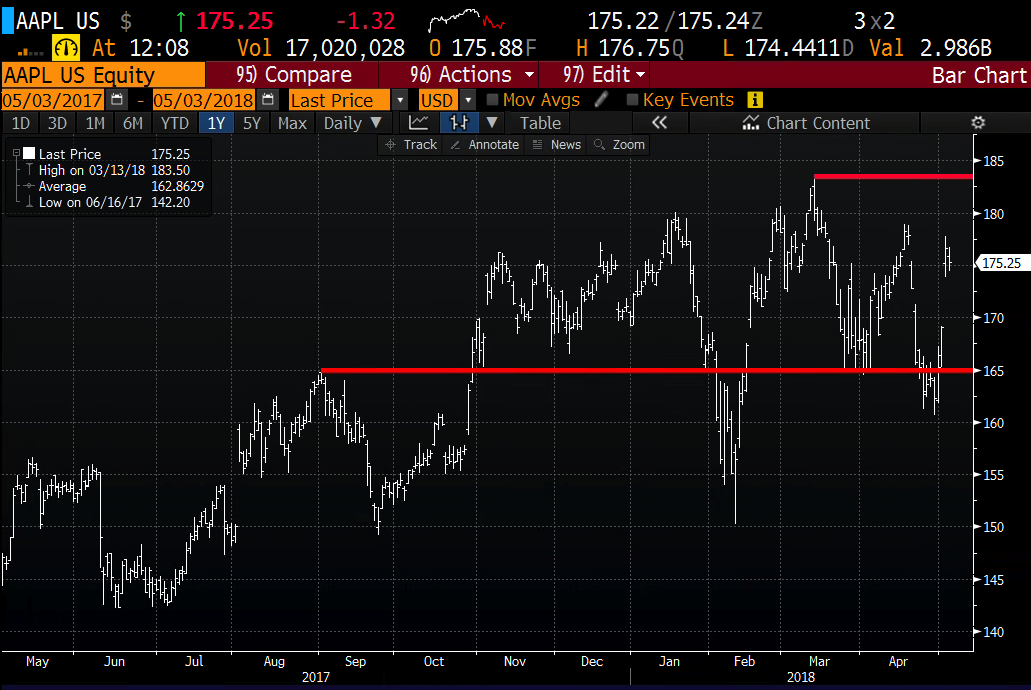