Tesla (TSLA) will report its fiscal Q2 results tonight after the close. The options market is implying about a $22 move between now and Friday’s close, or about 7.3% in either direction, which is slightly rich to the average move of 6.75% over the last four quarters (three up, one down). The stock has moved about 10% on average the day following results since going public in 2010.

The stock and its CEO/Founder Elon Musk has been particularly controversial of late. While the stock is down about 3.5% on the year, it is clearly in correction territory, down about 22% from its all-time highs made in late September. In this time period, the company has missed delivery estimates for its supposed mass-market Model 3, had a deadly auto-pilot accident while some in the investment community have suggested that the company could be facing a meaningful cash crunch in the months to come. Musk has been particularly combative at times on Twitter about all of these issues causing some to question his judgment as the CEO of a publicly traded company.

What’s clear from the one year chart is that $290. a level the stock broke below in late March is important near-term technical support as the next stop is $250ish, with very healthy resistance at $360ish: 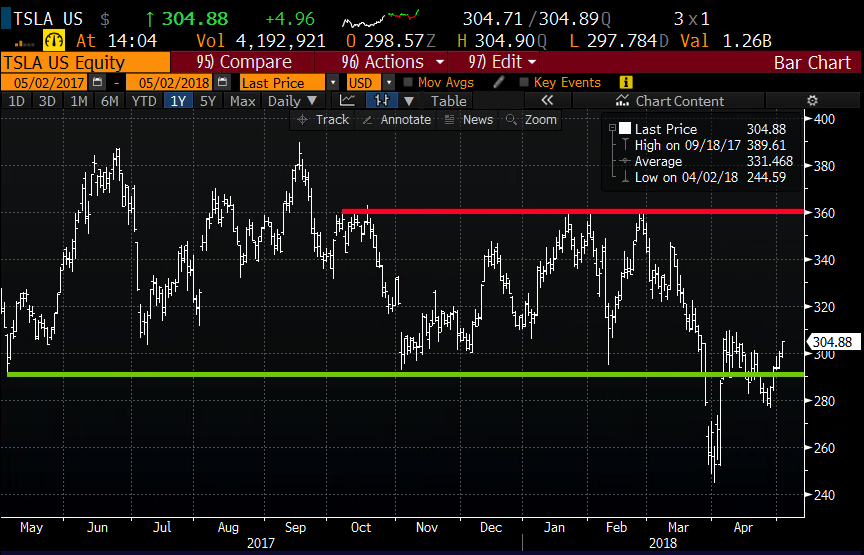 I would also note that the stock has had a fairly consistent history of 30% peak to trough declines in its short history, nearly one a year from 2013 through 2016: 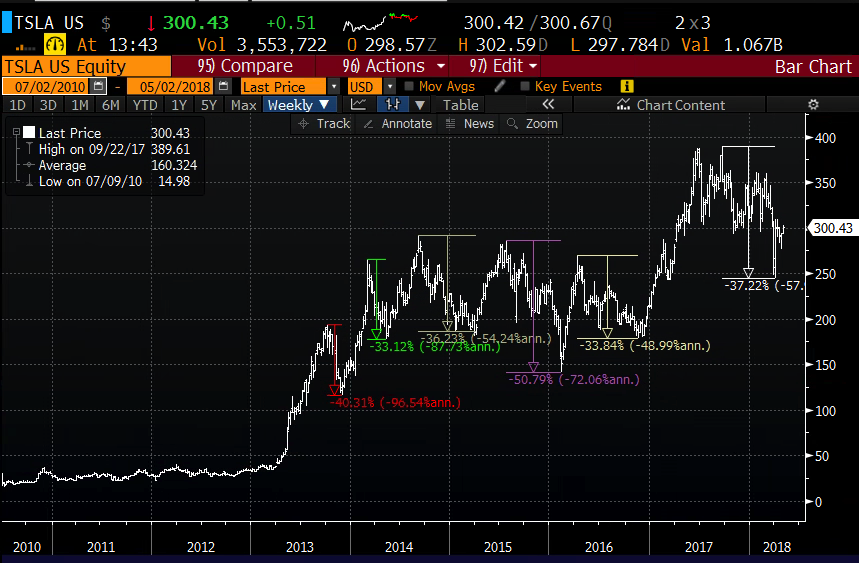 To suggest that the Wall Street analyst community is mixed on the stock is an understatement, with 10 Buy ratings, 12 Holds and 8 Sells. I am hard-pressed to think of another large cap stock with a $50 billion market cap like Tesla where analysts are so pessimistic. Oh and short interest is near 32% of the shares outstanding… important to remember that this is a push and pull between a handful of holders who don’t reduce their stake frequently (Musk holds 20% and Fidelity who holds nearly 10%, and while they buy and sell have maintained a similar share count for years).

-Goldman Sachs (sell): Most investors still cautious heading into 1Q results, where bulls still underscore July’s production/delivery update as the only meaningful data point ahead, and bears see a host of potential issues including margin pressure, significant cash burn, declines in deposits, and increased capital needs
Says most investors are expecting TSLA results to miss vs consensus
Overall expects TSLA to miss, though a potential reiteration of the target 5k production rate and 25% target gross margin for the Model 3 will likely give bullish investors enough to continue to wait

-Jefferies (hold): Says shares could go either way from here, in a note dated April 30, depending on how credibly Tesla re-bases expectations for volume ramp-up, margin & capital spending
Most critical will be any data on new gross orders, not just net
Says if there is underlying demand, funding and manufacturing issues – and therefore valuation – can be addressed; if not, multiples are again at significant risk

-KeyBanc (sector weight): 1Q report will likely be a positive catalyst for the stock as sentiment remains quite negative
Expects Models S/X gross margin commentary to be favorable, and should pave the way for improving Model 3 gross margin credibility Expects production run rates to be improved from the April 3 delivery announcement
Says cash burn and trajectory of Model 3 production ramp remain the most likely impediment to stock moving higher, but expects the positives to carry more weight for investors

The stock is clearly a battleground, a push and pull between bulls who are looking past near-term production hiccups and those who think the company is hanging on to stay afloat and short every rally.

Here are a couple ways to play with defined risk: