Despite the initial reaction of euphoria to the tax cuts lin December and January, the economy and financial markets here in the U.S. for the better part of 2018 have acted like the good news was anticipated. Yeah Yeah the tax cuts will take months if not quarters to work their way into the economy, but the 10% rally from late November when it became clear that tax cuts were happening, too late January when Q4 earnings and 2018 guidance was offered up by all the publicly traded tax cut beneficiaries might have pulled forward just a bit of rewards. 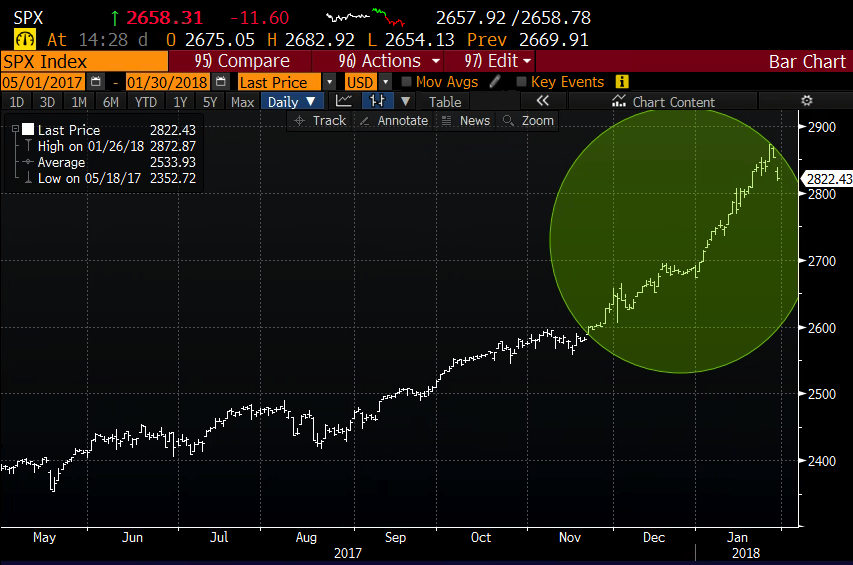 Last week we got Q1 GDP that was slightly ahead of expectations at 2.3%, but well below where expectations started in January above 3% and a deceleration of Q4 2017’s 2.9%. Last week we got a weak reading for durable goods orders in March and generally weak consumer spending this year and you get a sense that businesses and consumers alike are a tad spent despite 20-year lows in unemployment and the first signs of wage growth in years.

While 2018 has been a much rockier road for U.S. stocks than 2017 (a year that did not see a single peak to trough decline of 3% in the SPX, closing up nearly 20%), the SPX is down a mere 1%, but down 8% from the late January all-time highs. It feels like the lack of progress in U.S. stocks is the real problem, that investors got so complacent, buying every slight dip with the near certainty in a week that we would have higher prices.  The fact that the SPX is down only 1% as fears of a trade war stir while interest rates, the U.S. dollar and commodity prices all seem to be rising of late in unison might signal that there is a bit more pain to come for stocks. I guess the main reason is fundamentals. With a little more than half of the SPX reporting Q1 results, year over year eps growth is nearly 20%, while sales growth is nearly 9%, levels not seen in years, leaving many market participants ask in the 9th year of an economic recovery if this is as good as it gets?

We seem to be in a one step forward two steps back sort of market as the SPX has made two lower lows since the highs but a higher low following the quick collapse into the February low. To my eye, the jury is till out so to speak on the SPX has it continues to grind into this wedge, likely to resolve itself in a meaningful way one way or the other: 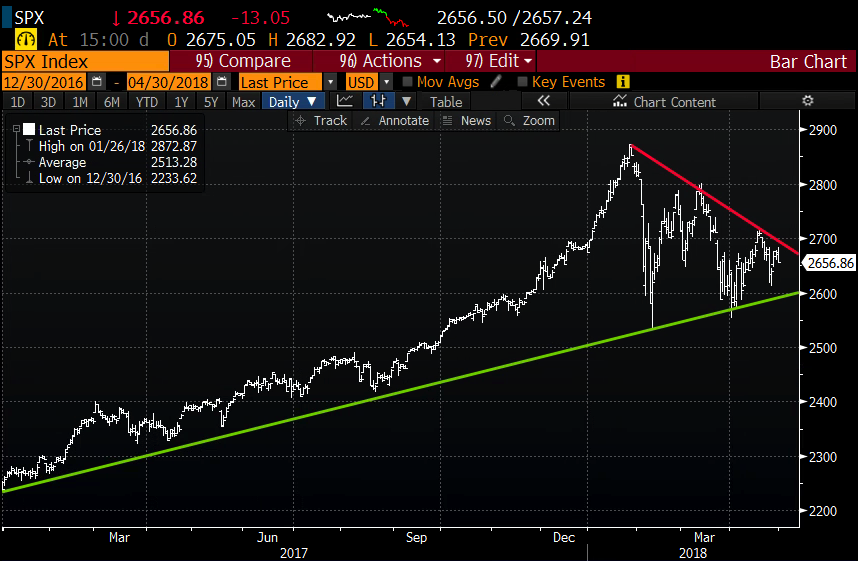 Its been my sense that following the tax cut, and the political capital it took to achieve them, with many in the Republican caucus having to abandon their concerns for deficits and knowing that a disproportionate amount of the $1.5 trillion in cuts that were pulled forward would go to large corporations and the donor class, and not most voters, that this was the only legislative achievement that Rs would be able to run on in the mid-terms, thus ensuring a legislative logjam for the balance of the year. And then you add in the president’s erratic behavior with some major looming geopolitical situations in Korea, Syria, trade with China, the splintering of NATO by Russia and the existential threat to Trump’s tenure via the Mueller probe, and there is little room for error out of Washington. We essentially have a lame duck president, a lame duck congress, a justice department and intelligence community under siege by the executive branch and you have the makings of Season 8 of Homeland.

Now meaningful progress on a handful of these issues, most notably the president being cleared by the special counsel of any wrongdoing in Russia election meddling and obstruction of justice, then we might be testing the highs from January fairly soon, as the president will be free to push his agenda hard into the mid-terms. But at this point that seems pretty unlikely.

Aside from just looking at the price chart of the SPX, it might also make sense to take a look at what the options market is expecting by way of movement. The 30-day at the money chart of implied volatility (the price of options) of the SPY, the etf that tracks the SPX shows levels more than double the 2017 average, but still well below the levels made in Feb and March following the sharp sell-offs: 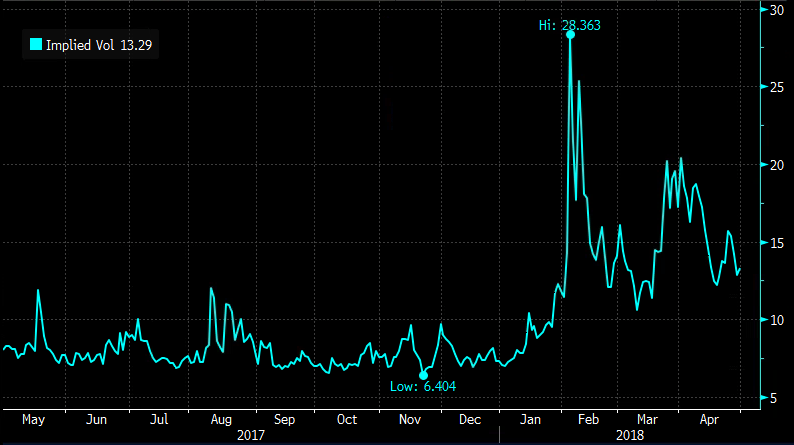 A few weeks ago when the SPY was nearly in the same spot we took a look at the set up in the index and concluded:

This is a pretty tricky set up for those thinking about slapping on protection with SPY or making an outright bearish bet. For one, if the SPY settled down, options prices would come in hard, with IV likely headed towards 10%, making long premium strategies challenged if another round of selling doesn’t materialize.

Here was the trade we detailed for those seeking SPY protection or targeting $250 in the coming months when it was $265.50:

While both options have decayed, the June 263 put is 4.70 and the June 250 put is 1.70, the price of the spread is the same as realized volatility, how much the underlying is moving around, keeping options prices bid despite the time decay.