Apple will report their fiscal Q2 results Tuesday after the close. The options market is implying about an $8, or 5% move between now and next Friday’s close (most of that implied movement is for the earnings event). On average, the stock has moved only 3% over the last four quarters, while the average move over the last ten years has been about 4.5%.

Shares of AAPL are down about 4% on the year, and down about 9% since last Thursday when prominent research analyst Katy Huberty from Morgan Stanley made a dramatic cut to her June quarter iPhone unit estimates to 34 million from her prior 40.3 million which was already shy of consensus of 43 million. This cut was followed by a slew of other analysts and is the obvious culprit of the stock’s recent relative weakness over the last week. Yesterday Bernstein’s Toni Sacconaghi offered up a particularly downbeat view, detailed on CNBC’s Halftime Report:

Toni highlight’s the potential off-set from an increased buyback that the company highlighted on last quarter’s call (emphasis mine), from their Q1 conference call on Feb 1:

Tax reform will allow us to pursue a more optimal capital structure for our company. Our current net cash position is $163 billion, and given the increased financial and operational flexibility from the access to our foreign cash, we are targeting to become approximately net cash neutral over time. We will provide an update to our specific capital allocation plans when we report results for our second fiscal quarter consistent with the timing of our updates that we have provided in the past.

I guess the most important takeaway is that there was NO iPhone Upgrade Super-Cycle that so many research analysts had been expecting, the company actually sold fewer iPhone units in fiscal Q1’18 (Dec 2017) holiday quarter (77,316) that included the 10-year anniversary edition than they did in fiscal Q1’17 (Dec 2016) holiday quarter (78,290), per Apple: 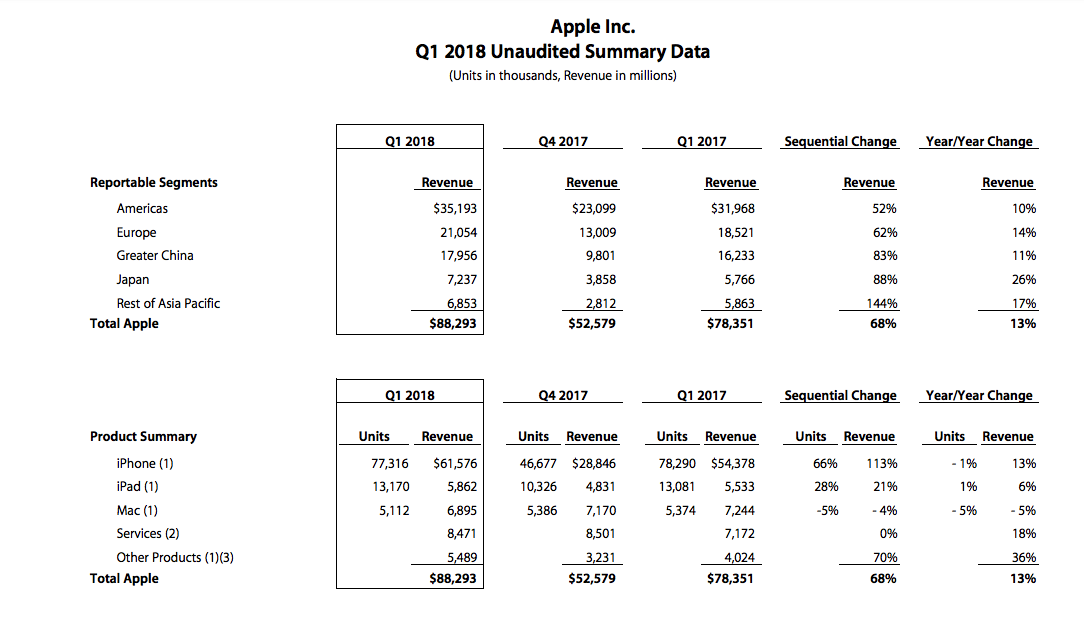 AAPL’s Other Products which includes Watch and AirPods is growing at a fine clip of 36% year over year, and high margin Services, which includes App Store, Apple Music & Apple Pay grew at 18% in the Holiday quarter, but as iPhones sales decelerate in growth so should Services and sales of accessories.

The stock to me is kind of in no-mans-land trading very near the mid-point of the year to date range in the low $160s. It appears to me that the stock has healthy technical resistance at $180 and considerable near-term technical support at the February panic intra-day low of $150: 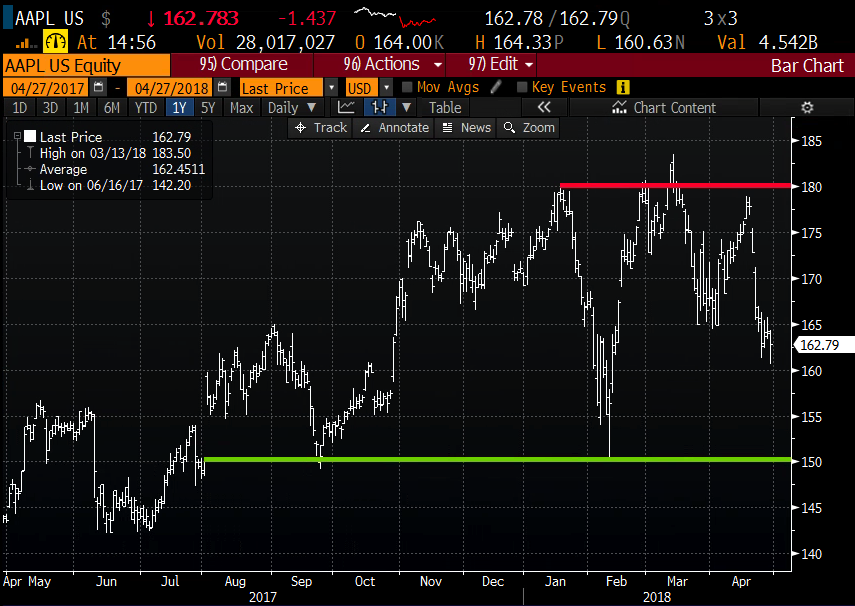 With the recent downdraft in the stock, short-dated options prices are fairly elevated with 30-day at the money implied volatility just below 30%, which might present yield enhancement opportunities for long holders: 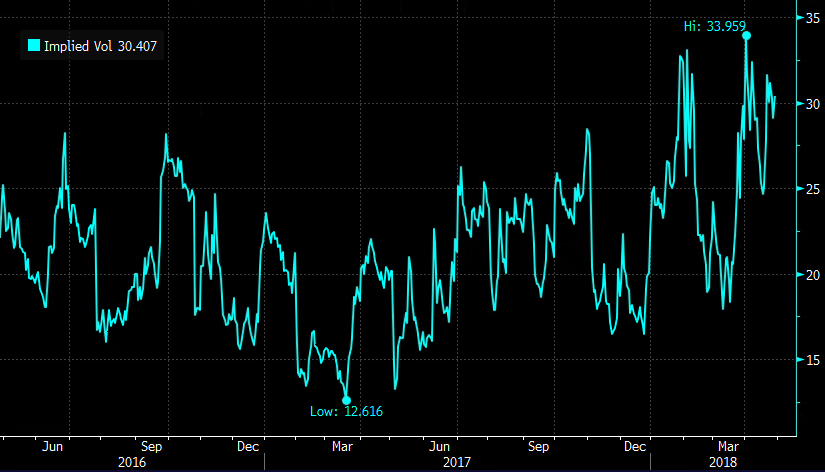 So what’s the trade? If you are long the stock, and you think that a guide down of June quarter might be in the stock, and the headline of a massive bump to the capital return might help offset some downside, then selling out of the money calls and puts against your long position make sense. You could just overwrite the position by selling an out of the money call, but you could also take a bit more risk and turn that overwrite into selling what is called a Strangle, selling a call and a put of the same expiration but different strikes.

For example, vs 100 shares of long stock, selling an out of the money call allows for gains in the stock up to the short call strike. To add more yield and complete the strangle, the investor would sell and out of the money put, would have losses of the stock below current levels, but the sale of the call and the put would provide a buffer to the downside in the form of the premium received for selling both options.

Profits: If the stock is 180 or higher, you will have the gains of the stock…. is called away at 180, but you have also gained the $3 in premium for the Strangle sale, so essentially selling at 183

Losses: of the stock below current levels, less the $3 premium sale, so protected down to 160. The worst case scenario the stock is 150 or lower and you would be put 100 shares of stock at 150.