Facebook’s (FB) Q1 earnings report might be the most eagerly awaited of the thousands of U.S. public stocks to report this earnings seasons as investors will focus on any material impact to user engagement and growth from the Cambridge Analytica data breach fallout and subsequently the impact on ad revenues. Prior to CEO Zuckerberg’s testimony on Capitol Hill earlier in the month, I had the following to say on this in a post dated April 6th:

in an interview with Recode the other day, Zuckerberg said they have not seen any “material impact” from the scandal, but I think it is safe to say that assessment might be a little premature. If Zuck is right, and 2018 estimates for 20% eps growth on 36% sales growth (reaching $55.3 billion) then the stock is extremely cheap trading less than 22x this year and 18x next. But that’s a big if as investors forget despite the secular shift towards mobile ads, the ad business is very cyclical, let alone prone to consumer boycotts.

I suspect it is still too early to see any “material impact” on the advertising front as the secular shift to mobile advertising is an indomitable force, and at the moment, FB is one of the only global platforms that have more than a 1 billion reach (they have 2 billion monthly active users) and their ROI for advertisers is far superior to any other platform because of that reach and engagement. So user growth and engagement would have to decline meaningfully for advertisers to materially reduce their spend. RBC’s Internet analyst Mark Mahaney succinctly framed how this topic will impact the stock near term:

Based on intra-quarter data points, channel checks, our proprietary survey work, and our model sensitivity work, we view current Street Q1 estimates as reasonable, though we believe the very recent negative publicity may have removed “upside” ad revenue opportunities and likely added uncertainty around user engagement and growth.

And highlighted the following items to focus on in the print:

What to expect? The options market is implying about a $9, or about a 5.5% move in either direction.

Back on April 6th, I detailed a collar strategy for long holders in the stock when it was very near where it is now around $160:

Profits of stock up to 170, stock called away at 170, but can always buy back short call to keep the stock position in place

Losses of stock down to 150, protected below

This same strategy can put on for about even money, the call and put are both about $3.50 vs stock at $160. Let’s look at the charts again and reinforce why long holders might want to have protection below $150, the intersection of the uptrend since 2013 and its low last month: 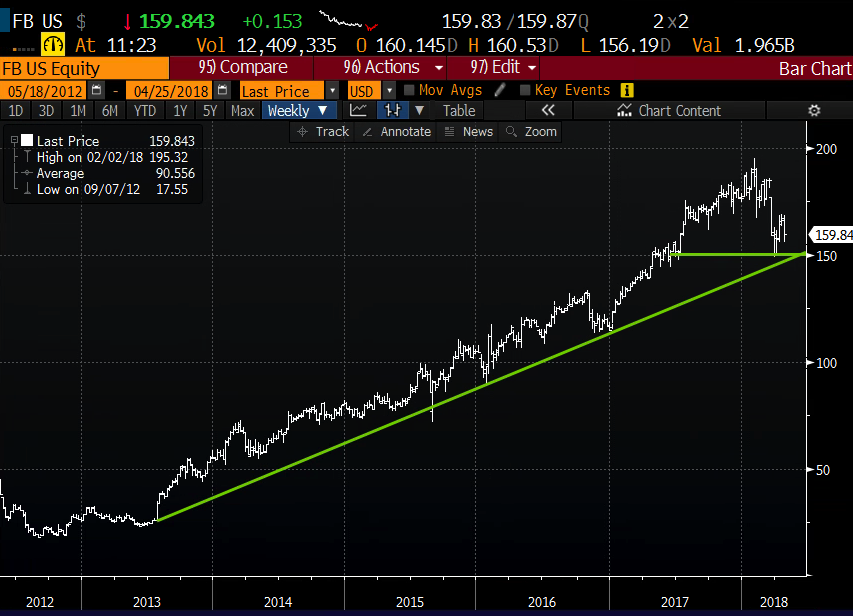 Earlier in the week Bond Manager and often swell stock picker Jeffrey Gundlach of Doubline Capital laid out a fairly simple thesis for why he is short the stock on CNBC (watch here):

GUNDLACH: WELL, IT CAME FROM A) I WAS LONG THE ENERGY THING AND DIDN’T WANT TO BE RECESSION – FULL ON RECESSION EXPOSED IN MY PICK, AND SO I WANTED TO SHORT AGAINST IT. AND I SAW THE CONGRESSIONAL TESTIMONY, WHICH I THOUGHT WAS TERRIBLE. I THOUGHT IT WAS DISMISSIVE. I THOUGHT IT WAS INSINCERE.

GUNDLACH: YES. I THOUGHT THAT HE WAS VERY SEMANTIC IN THE WAY HE WAS ANSWERING QUESTION AS OPPOSED TO FULLSOME. AND I – ONE OF THE CHARTS ON STAGE TODAY, ONCE THE REGULATORS SHOW UP, THEY TEND TO CAUSE PROBLEMS. THERE’S BASICALLY TWO MODES OF REGULATION BY CONGRESS, NONE AND OVERREACHING. AND I THINK WE’VE MOVED FROM NONE AND WE’RE ABOUT TO MOVE INTO OVERREACHING. AND I USED A SLIDE THAT WHEN THEY START REGULATING BIOTECH COMPANIES, FOR EXAMPLE, THE STOCKS JUST STARTED TANKING. AND FACEBOOK DROPPED, IT HASN’T TANKED – I’M ACTUALLY HAPPY ABOUT THAT BECAUSE IT LEADS TO BETTER POSITION FOR THIS RECOMMENDATION. BUT I’M REMINDED, I USE THE METAPHOR OF THE

SAN FRANCISCO EARTHQUAKE AND THE STOCK MARKET. THE DAY AFTER THE SAN FRANCISCO EARTHQUAKE, THE LEGENDARY INVESTOR JESSE LIVERMORE SHORTED THE MARKET BECAUSE HE COULDN’T BELIEVE THAT THE MARKET WAS ACTUALLY UNCHANGED. AND HE SAID, THIS IS A BIG EVENT AND IT HASN’T BEEN DIGESTED INTO THE BULLISH PSYCHOLOGY OF THE MARKET. I THINK THE REGULATION HERE IS A BIG EVENT. AND I ALSO THINK THERE’S NEVER ONE COCKROACH IN THE KITCHEN. SO, WE’VE HAD THIS APOLOGY TOUR. WE’VE SEEN IT BEFORE. THIS ISN’T THE FIRST APOLOGY TOUR. I THINK WE’RE ALREADY ONE APOLOGY TOO FAR ON THIS THING. ONE MORE PROBLEM AND THERE’S GOING TO BE ONE BECAUSE THERE’S NEVER ONE COCKROACH. I JUST DON’T KNOW WHAT WILL HAPPEN WITH THE CREDIBILITY OF THESE, “I’M SORRY, WE’RE GOING TO MAKE IT BETTER TYPE STATEMENTS.” AND I DON’T FIND IT REASSURING ONE OF HIS ANSWERS THAT AI IS GOING TO ANSWER OUR PROBLEMS FIVE OR TEN YEARS FROM NOW. THIS PROBLEM BEGAN YESTERDAY, NOT FIVE OR TEN YEARS FROM NOW. AND SO I THINK THAT THERE’S A LOT OF – I THINK THERE’S GOING TO BE A LOT OF TURBULENCE IN THE AIR FOR THIS FLIGHT.

Very simply he thinks there are more shoes to drop.

If the stock is above 150 the April 27th weekly 150 put will expire worthless. The ideal scenario is that the stock goes down in line with the implied move and the short put helped finance owning the June. At this point I would look to either take the profit as the June 150 put would gain in deltas, or depending conviction for a break of $150, sell a lower strike put in June expiration to make a vertical put spread and further reduce the premium at risk.

The worst case scenario is risking the 2.75 in premium paid if the stock were to make a dramatic move higher above current levels or well below the strike.

As for playing for a rally, I suspect it will be short-lived, but If playing for a move higher in line with the implied move you might consider a call butterfly, for instance:

Rationale: I’d expect a rally to be faded, this strategy helps to offset the vol crush that will occur post earnings, while also targeting a move higher slightly lower than the implied move but risks about 1% of the stock price to possibly make 3x the premium risked.