Boeing (BA) will report Q1 results tomorrow before the open. The options market is implying about a 5% one day move, which is rich to the average over the last four quarters of about 4% and well above the ten year average of about 3%.

The stock has been mildly controversial over the last year as it has traded like a FANG stock, up 120% since the start of 2017, and outperforming its peer group and the market up 12% in 2018, despite being down nearly 11% from its 52-week and all-time highs made in late February.

To my eye there are only two lines that matter when drawing on the one year chart, the uptrend since last May’s low, which is has held like a boss, and then $300, the level the stock-based at it late December/early January and then launched $50 higher in a straight line: 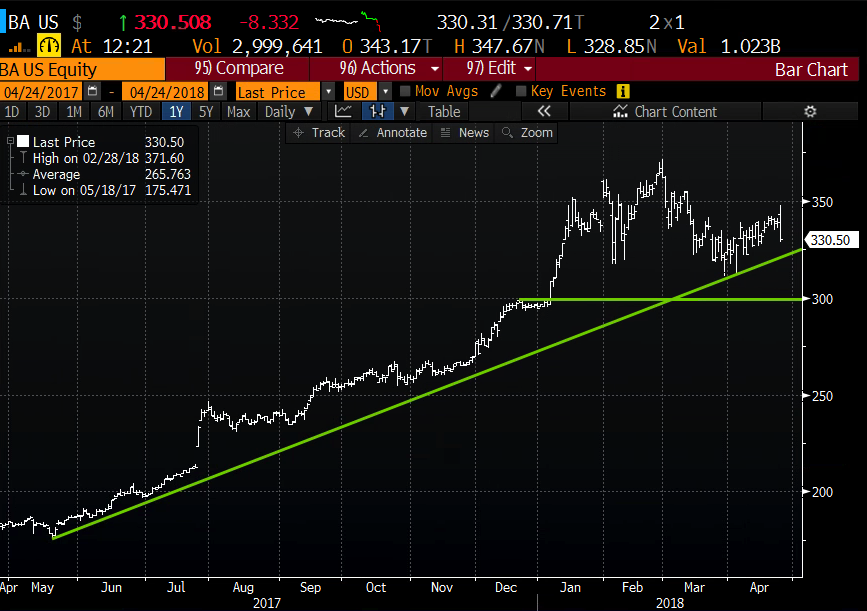 Unlike a FANG stock though, BA has low single digit expected sales growth, trading at 24x expected 17% eps growth in 2018. On a P/E basis, shares of BA are trading at more than 10-year highs: 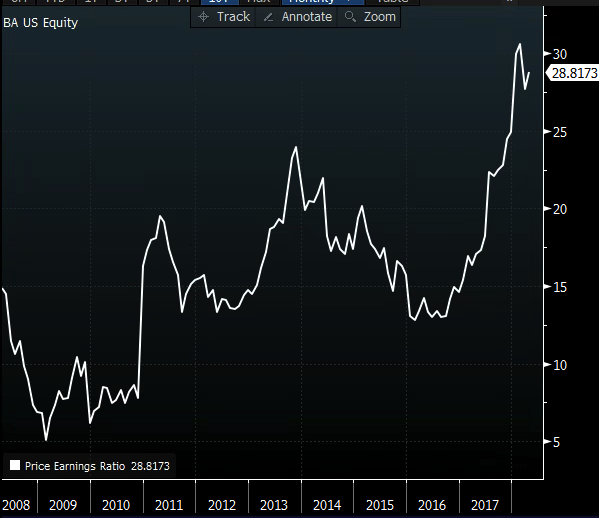 If today’s price action in industrial peers is any indication of a trend in the space, then BA holders might brace for some near-term paid, even on an inline qtr and decent guidance.

Let’s take a quick look at a few disasters today. Look at gap in crap in MMM, down nearly 8% on the day: 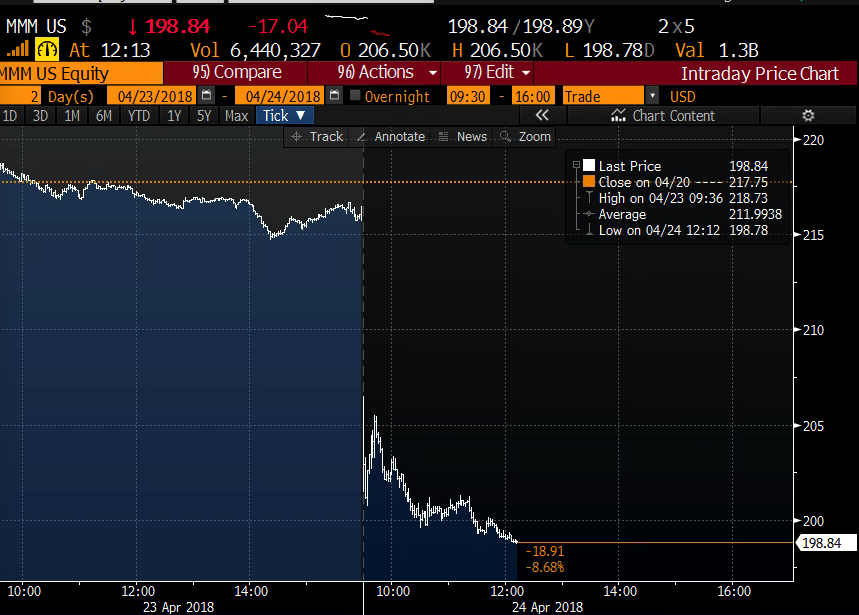 more importantly, roundtripping nearly the entire one year move and down 23% from its 52-week and all-time highs: 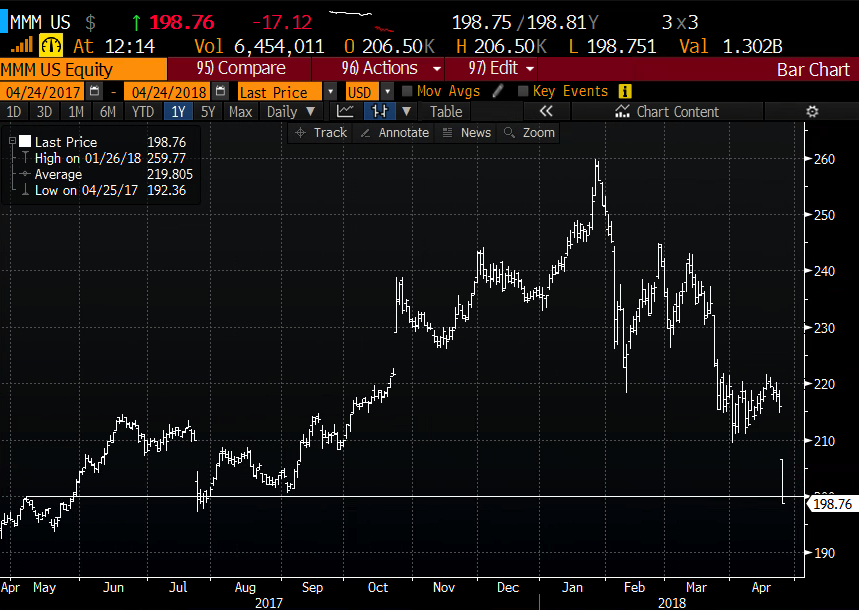 and Caterpillar’s (CAT) 8% intraday reversal from up 4% to down 3% on guidance that disappointed, and now approaching that downtrend from its 52-week highs: 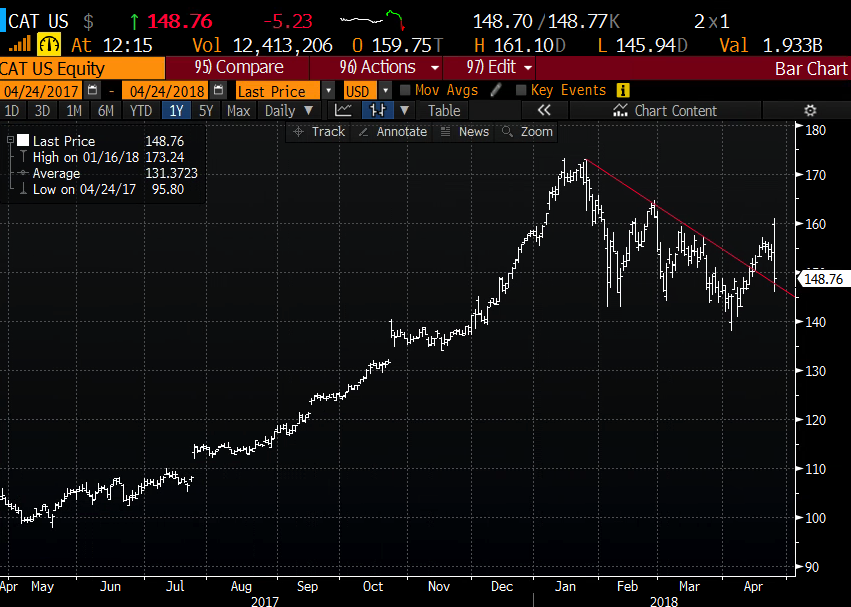 And Lockheed-Martin (LMT) who reported this am, the stock actually opened up a tad and is now down 7% on the day after reversing just below a prior all-time high: 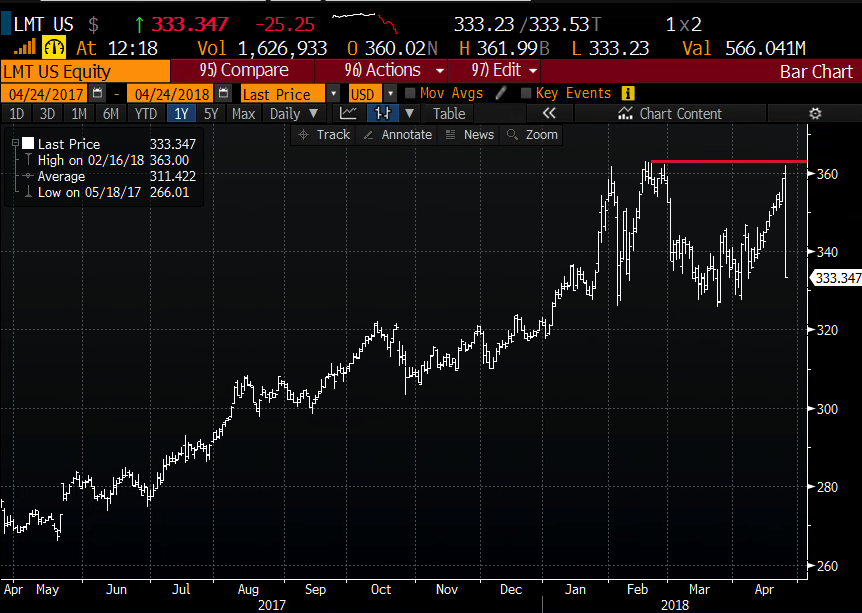 So what’s my take on BA into the print? I think they would have to announce that they cured cancer for this stock to go up and stay up tomorrow.

So what’s the trade? if I thought the stock could be down 5% in line with the implied move I might consider…