Tomorrow after the close Texas Instruments (TXN) will report their Q1 earnings. The options market is implying about a 4% one day move Wednesday in either direction. The stock on average has moved about 3% over the last four quarters which is a tad shy of the ten year average of about 3.3%. BUT, the stock declined 8.5% on January 23rd following their Q4 results from an all-time closing high. While past performance is NOT indicative of future returns, I think it makes sense to take a look under the hood and see exactly what caused the worst one-day sell-off in the stock in years.

First, let’s start with sentiment heading into the print, it was white hot, for the stock and the semiconductor space, fueled by the continued prospects of M&A and the focus on emerging technologies like AI, Internet of Things (IoT), Autonomous driving, Crypto mining etc. TXN gets ~50% of their sales from industrials use cases for their chips that includes IoT, where many investors see as a sweet spot as PC and smartphones have stopped growing. Following the results, Credit Suisse’s Semi analyst John Pitzer, who rates the stock a buy clearly stated in a research note that the quarter was ‘Not Good Enough’ considering the stock’s then 15% ytd gains, decelerating sales growth, higher operating expenses and i’ll throw in rich valuation to its own history, its peers and the market:

The stock is now down 18% from its all-time highs made the day of their last print, and frankly is through very important technical support at $100: 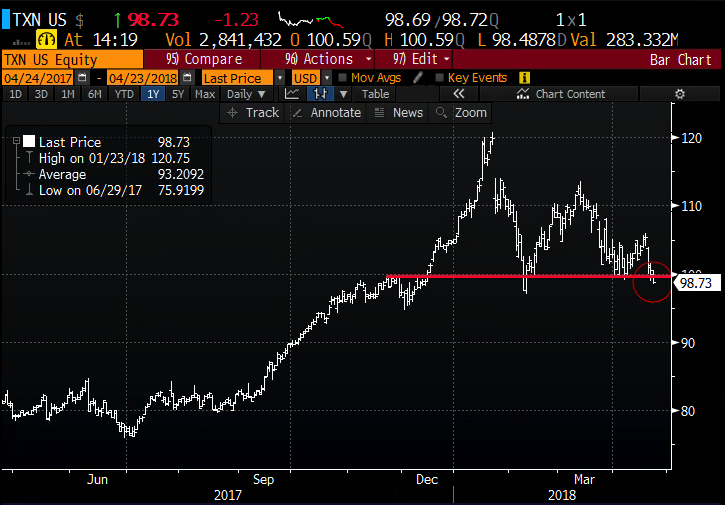 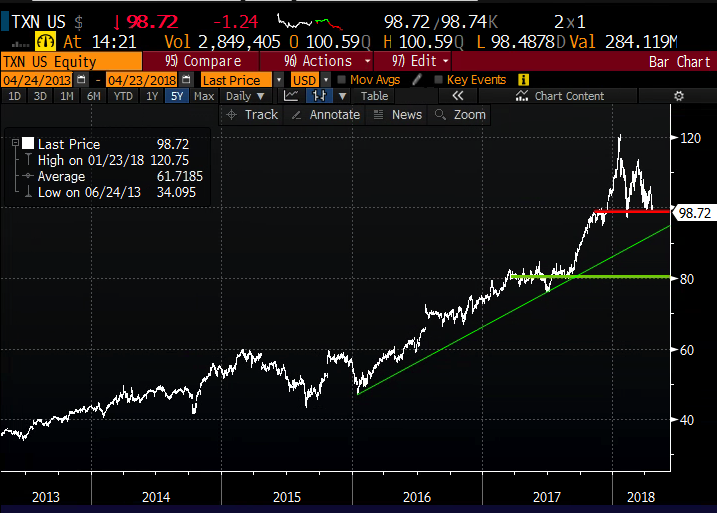 TXN trades about 20x expected 2018 eps growth of 14% on 5% expected sales growth. The most important word for the trade set up is ‘expected’. If the company were to report an in-line Q1 but guide down for Q2 then the stock’s 20 p/e is gonna stick out like a sore thumb above a market multiple and I suspect the stock will get re-rated and we will see a $90 print in the coming days/weeks. A beat and raise are likely to be a low probability event given the lower than expected guidance by chip foundry Taiwan Semiconductor (TSM) and from semi-equipment maker Lam Research (LRCX). If the company were to surprise to the upside with sentiment so poor and expectations low then the stock could easily rally in line with the implied move, but given the headwinds (including tariffs which I have yet to mention) then I could see a short squeeze failing as we wait to see hear commentary and guidance from competitors like Intel and Nvidia that report in the next week.

Playing for continued weakness the stock that could be catalyzed by weak guidance I might consider a diagonal put spread., for instance:

Profits between 97 and 90, but not 7 profit potential and here is why…. if the stock were to go to 90 on Friday’s close, the April 27th weekly puts would in fact be worth $8, but the May 90 puts still have three weeks in time value in them and would be worth probably $2ish and to book the profit you would need to sell the long put and buy back the short put, so lets say the profit might be between $5 and $6. ($1 debit for trade, $7 in gains of long put, less $2ish to buy back the short May 90 put.

Losses of up to $1 in premium paid plus the cost of buying back the short May 90 put. For instance, if the stock was 98 or above on April 27th expiration, the April weekly put would expire worthless, but the May put that was sold to reduce the cost of the spread will be left naked short and would need to be covered. While the May 90 put would certainly be worth much less than the $1 that it can be sold for now with the stock at $98.50, it will still cost something to close and add to the loss of the trade.