On February second, shares of Alphabet (GOOGL) closed down 5.3% in response to the prior night’s Q4 results that on the surface looked decent. At the time GOOGL was trading within a couple percent or so of its all-time high made earlier in the week, but the earnings gap was the start of what would be nearly a 20% decline in the coming week from that prior high. As the one year chart below shows the stock filled in the gap over the next month, but then not only re-tested the Feb lows in sympathy with Facebook’s weakness associated with the revelation of their massive data breach but made a brief new 2018 low before this month’s recovery: 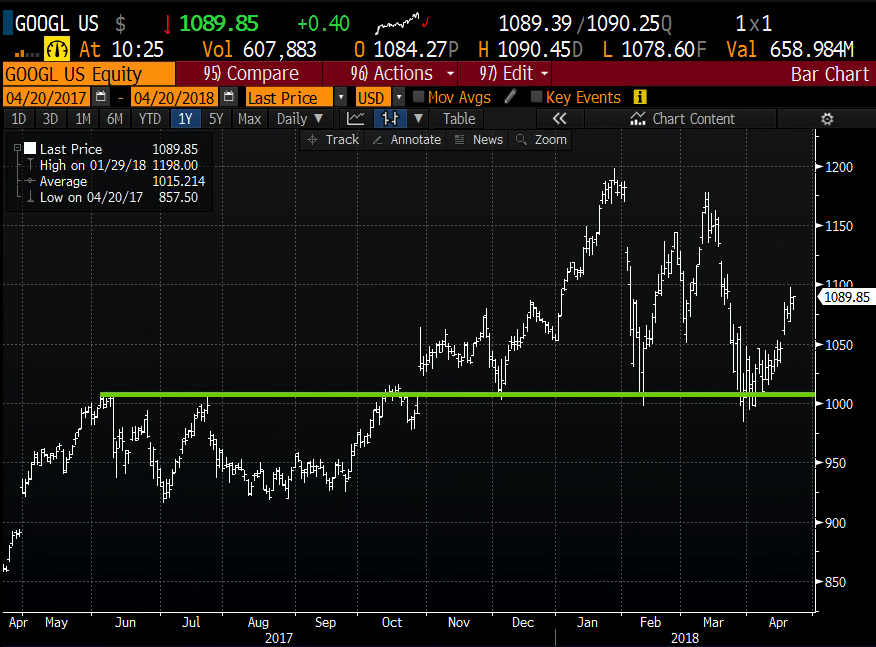 $1000 in GOOGL is obviously a massive technical level, where the stock broke out above in late Oct following Q3 results, bounced from in early Dec, early Feb and in late March. On the upside, there is little resistance until the March high of 1180.

On the fundamental side, GOOGL is viewed as growth at a reasonable price… the stock is trading 26x its expected 2018 eps growth of 30%, which is expected to accelerate from last year’s 15% eps growth, despite sales growth remaining stable at 20% year over year for its third year in a row, and expected to top $100 billion for the first time ever. To put that milestone in some context, it took MSFT 31 years from its 1986 IPO to do that just last year, vs GOOGL who will likely do it in less than half that time.

So what caused the post-earnings decline? Rising expenses, per Barron’s:

there were lots of little things to gripe about in the expense line, with Alphabet’s total operating income coming in about 8% lower than the Street was expecting.

Part of that was yet another quarter of rising “traffic acquisition cost,” or TAC, the money Google must spend to obtain the traffic for its ads. That includes payments to Apple (AAPL), which controls Alphabet’s access to the iOS operating system as preferred search provider.

There were other costs as well, though, such as a rise in marketing, and more money spent to build Google’s hardware devices such as the “Pixel” family of phones.

Well regarded Internet analyst Scott Devitt from Stifel downgraded the stock from a Buy to a Hold largely on concerns that the valuation is stretched as expenses are going up, per CNBC:

“Alphabet continues to drive growth at scale through strength in mobile search, YouTube, and programmatic advertising, while investing in other key initiatives (cloud, hardware, AI) that should serve as growth levers in 2018 and beyond,” analyst Scott Devitt wrote in a note to clients Friday. “We are Hold rated on shares however given current valuation relative to historical ranges and highlight some potential longer-term concerns including: Amazon as the first entry point to product search; Google Cloud Platform market share; regulatory risk.”

The analyst said Amazon is a threat to Google’s ad business. He noted more than half of US consumers use Amazon to search for products over the company’s search engine.

“Amazon has grown its position as the first destination for consumer product searches,” he wrote. “This has the potential to cannibalize Google’s revenue from retail advertisers.”

Oh and remember how the media obsesses for weeks over the Facebook – Cambridge Analytica deal, well I suspect the brouhaha is not over, and Google will soon be in the sites of Washington.

GOOGL will report Q1 earnings on Monday after the close. The options market is implying 5.5% one-day post-earnings move, which is rich to the 4% average over the last four quarters, but a tad below its ten-year average of 5.5%.

RBC’s star internet analyst who rates the stock a Buy with a $1285 price target is looking for the following in the qtr:

For Q1:18, we are expecting gross revenue of $30.55B, net revenue of $24.42B, Adjusted EBITDA of $11.92B, and GAAP EPS of $10.07. Our gross revenue and net revenue estimates are a bit above consensus (at $30.00B and $24.28B, respectively) and our GAAP EPS estimate is slightly above (Street at $9.32). Still, the biggest unknown for us is Regulatory and TAC… We also remind investors that due to new accounting/reporting changes, OI&E may be more volatile, Nest will be reported as part of the Google Segment (vs. Other Bets prior), and Network Sites metrics will be measured in Impressions and CPI’s vs. Paid Clicks and CPC’s prior.

Mark points to the following issues to focus on:

So what’s the trade? I suspect that the increased costs in Q4 was not a one and done so to speak. Consider for a moment that last month Facebook said they will hire 10,000 new security and content moderation employees by the end of the year (5,000 already hired) increasing their headcount by 40% year over year! This for a business that was supposed to be more efficient using artificial intelligence and advanced technologies that are far more leverageable than humans. I would also be surprised if the company were to give overly optimistic guidance in light of oncoming government scrutiny.

Playing for an inline quarter, weak guidance on increased spend makes sense to me.

Rationale: I considered put spreads, but the out of the money puts below 1000 just look to dollar cheap to me. For instance with the stock at 1083, the May 980 put is 6.50 bid, or less than 1 percent of the stock price… not a great sale. The in the money strike offers the best chance of break-even with a delta near 45, so as usual with our disclaimer on long premium directional trades into events, you need to get a lot of things right to just break-even, first and foremost direction, then timing and magnitude of the move.