A little more than 10% of the S&P 500 (SPX) have reported Q1 earnings over the last week, in which time the index has had an upward bias rallying nearly 3%, and up about 6% since making a double bottom low a couple weeks ago: 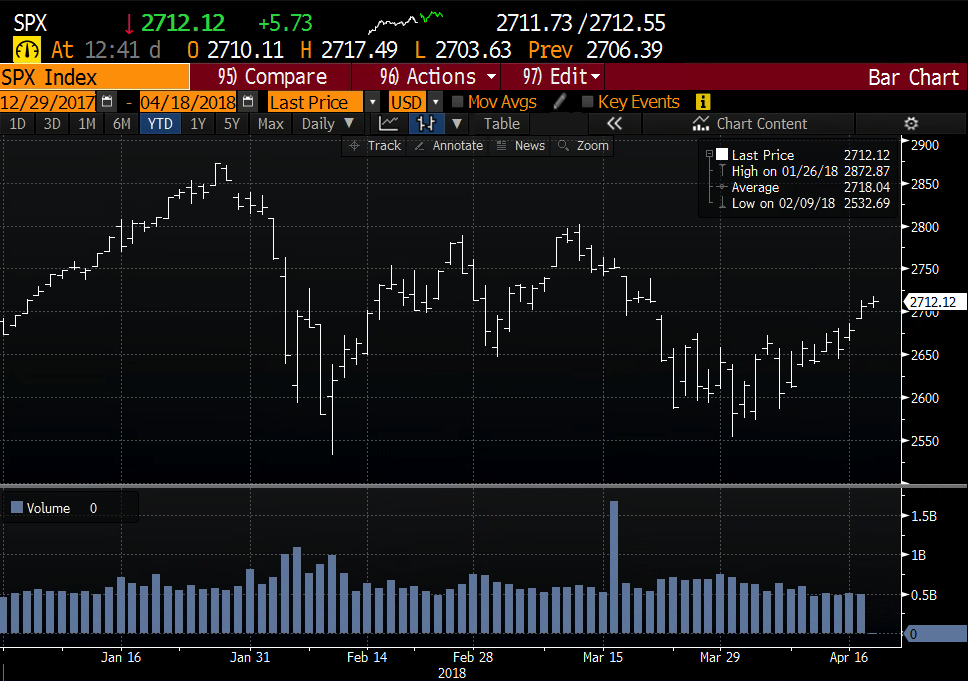 While the year to date chart looks fairly constructive, I think it is important to note that this year’s volatility, after such a low volatility rise last year appears to be setting up for another sharp move. Your guess is as good as mine which way it breaks, but a rejection at the downtrend from the all-time highs made in January, less than 1% from current levels would certainly place the chances of a retest of the uptrend just below 2600: 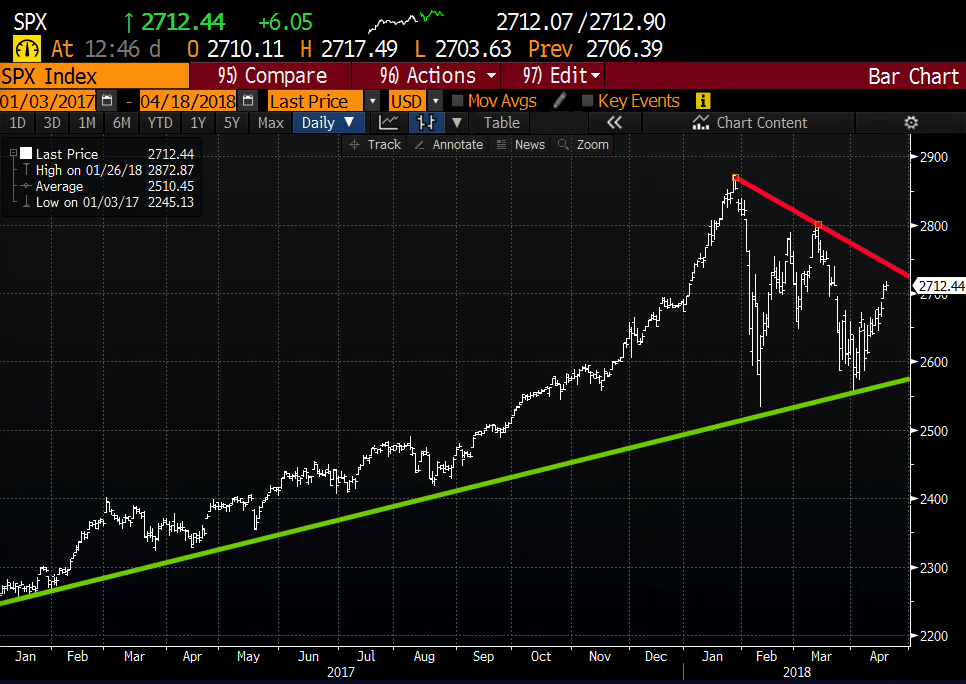 I can’t emphasize enough how important next weeks earnings from tech behemoths like Alphabet (Apr 23rd), Facebook (Apr 25th) and Amazon, Intel & Microsoft (Apr 26th) are for the market, more importantly, will investors sell on what is generally expected to be good news, like we have seen in financial stocks over the last week.

Bringing it back to a bit more micro though I want to quickly look at Blackrock (BLK), the largest fund manager on the planet who saw its assets under management rise to $6.32 trillion, up from $5.42 a year earlier. Obviously, rising risk asset prices help inflate that number, but in the quarter just ended the company had net inflows of $35 billion! Shares of BLK are up 40% from this time last year, which is pretty astounding, but they are expected to grow eps 25% and sales 19% in 2018.

But maybe the bloom is starting to come off of the rose a little, and maybe the stock’s lackluster reaction to Q1 results on Apr 12, and its 13.5% decline from its all-time highs made in January are signaling lower lows. Near-term, $500 might serve as decent technical support: 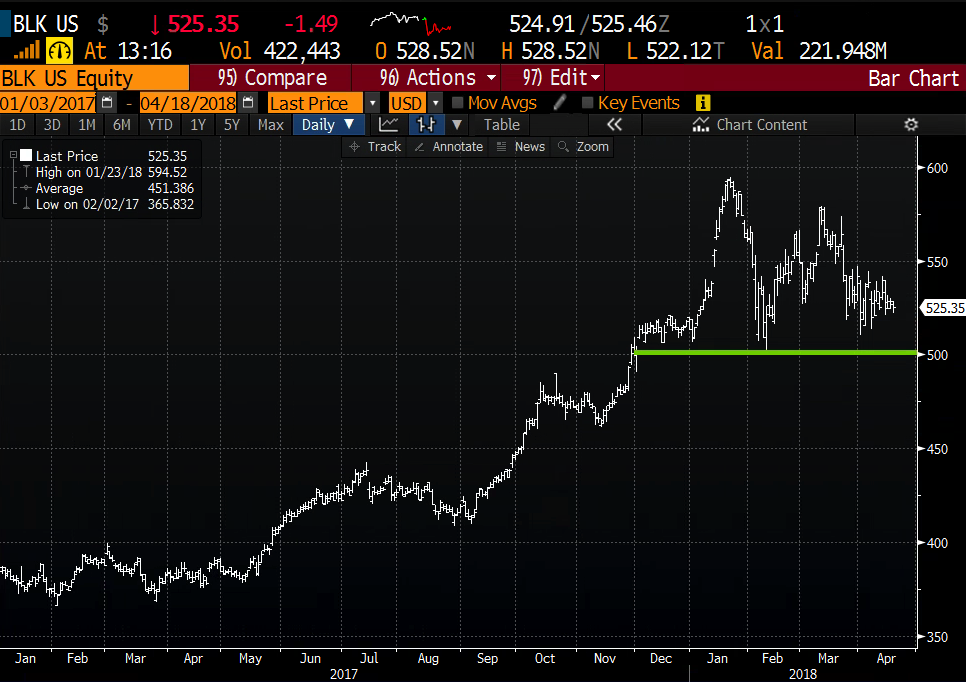 But a break below that on company-specific or a broad market sell-off below the recent lows and I suspect BLK sees outflows which might cause investors to take profits on one of the most revered names to stock and bond market performance. There could be an air pocket down the May 2017 breakout level near $400: 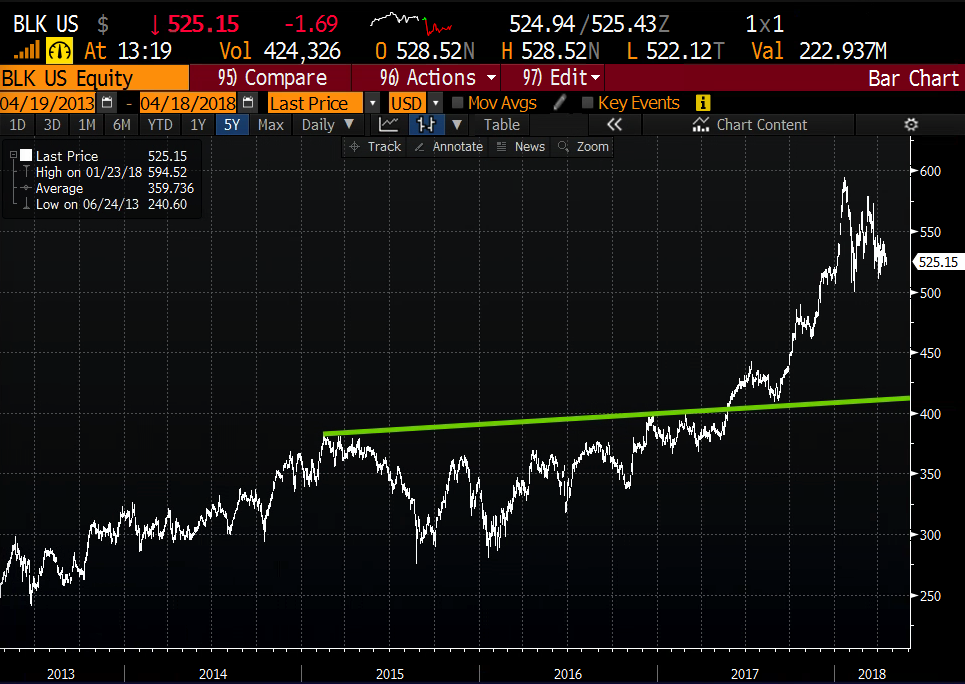 Options are not particularly liquid in BLK being a $525 stock, but they do trade, and if I were looking to play for a break of $500, targeting a move back to $400 I might consider the following in Oct expiration, could also be used as a hedge against long stock:

If BLK is 500 or higher the short may 500 put will expire worthless and you own the much longer dated Oct 500 put for $18. At which point depending on how close BLK is to the $500 strike you could sell a shorted dated $500 put to turn into another calendar and reduce the premium at risk, or turn into a vertical put spread by selling a lower strike put in Oct expiration.

The max risk of this trade is the $18 in premium spent and could be lost on a significant move above current levels or below the 500 strike.

Rationale: this is a way to leg into a trade with a longer time horizon which should help offset some decay in a slow-moving situation in the near term. One would not do this trade if they had a convicted bearish view in the near term that the stock could decline much below $500 in the next month.