IBM reports Q1 results tonight after the close. The options market is implying about a 4% one day move tomorrow which is below its four-quarter average of about 5%.

IBM, up 5% on the year is actually out-performing the S&P 500 (SPX)’s 1% gains, not a phrase spoken too frequently over the last decade.

The Wall Street analyst community remains downbeat on the stock with only 8 buy ratings, 17 holds and 2 sells. Bernstein’s top-rated hardware analyst Toni Sacconaghi who rates the stock a hold with a $150 price target had the following preview in a note to clients, per Barron’s:

while IBM’s revenue is likely to come in $300 million above the consensus, he’s focused on other things: Restructuring, and the challenge of meeting the company’s 2018 earnings target.

On the first matter, the first-quarter EPS “is somewhat meaningless,” given no one knows yet what kind of restructuring actions IBM took during the period. Those actions may have boosted profit in the quarter, he muses:

A key issue for investors is how big IBM’s restructuring actions will be in Q1 and the accompanying savings IBM believes that it can realize in FY 18. We note that IBM took a very large restructuring charge in Q1 16, but did not capture a material benefit in 2H 16. We believe this time *could* be different given management’s renewed focus on margin improvement and estimate that restructuring may be a ~$0.20+ boost to EPS in each of Q3 & Q4 18.

On the latter point, he sees a tricky path to the company’s forecast for EPS of $13.83 for the full year. It may have to be made up with one-time items to boost the results:

Even assuming meaningful restructuring savings, our waterfall analysis suggests that FY18 EPS is not a slam dunk and that consensus estimates may be too high in 2H 18 – we are $0.36 below for 2H 18. Overall, we suspect that IBM can find incremental tax benefits or other non-operating items to achieve its $13.80 EPS guidance for the year.

RBC’s analyst who rates IBM a buy, had a more optimistic view, per Barron’s:

Amit Daryanani of RBC Capital, and writes that both revenue and EPS should beat, helped in part by a “favorable foreign exchange environment.” He’s only modeling revenue of $18.7 billion and EPS of $2.41, but he sees “upside” to those numbers.

More importantly, Daryanani thinks gross profit margin may be going higher, “not just stable,” which could help the stock rise from here.

He lays out a number of things that may have helped margins in the quarter and may continue to do so:

We see multiple tailwinds that should propel GMs higher: 1) account run-outs provide visibility on richer GM revenue through early part of 2018 (90% visibility in GBS Mar-qtr sales by late Jan); 2) initiatives around services productivity should translate to better margins in H1:18; 3) transactional mix normalizes (was soft in Q4), should help gross margins; 4) 2017 was a year of deal integration, which impacted margins; 5) IBM saw headwinds in GTS due to large-contract conclusions that were wrapped up end of 2017; and 6) as IBM gets scale and mix efficiencies in cognitive segment, should benefit margins.

The stock has been volatile over the last six months, trading as low as $140 and as high as $170, and is now approaching what might serve as near-term technical resistance near $162: 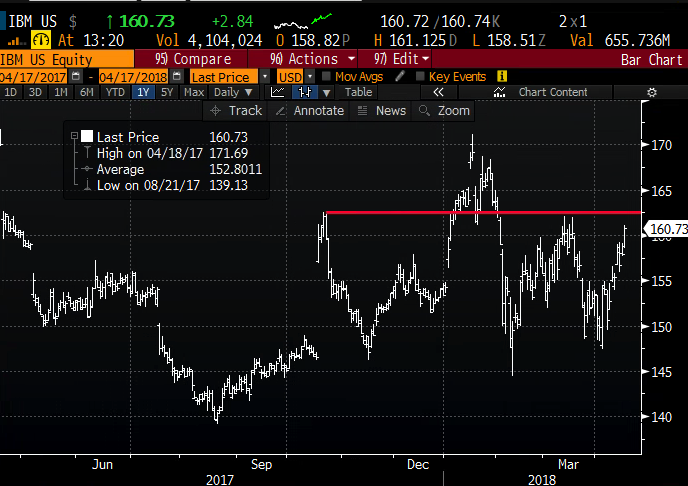 If the stock gets through last month’s high it could be a straight shot to the Jan high near $170. On the flip-side, if the company misses and guides lower it is going straight back to $150, where it was just two weeks ago.

Frankly, I don’t have a strong view on the stock, back in early Jan when the stock was very near where it is trading now, i had the following to say, and frankly not much has changed:

While that dividend yield at 3.65% looks fat, the commensurate rise in interest rates might start to make it look less attractive. Is it the weakness in the U.S. dollar? considering the company gets two-thirds of their sales overseas, the dollar’s weakness (nearing the 2017 lows), despite expectations for higher rates in 2018 could be viewed as a massive tailwind. Or is it crypto-fever? WinterGreen Research estimates that IBM took home more than 30% of the $700 million market for blockchain products and services (per Bloomberg), which research firm Markets & Markets sees reaching close to $8 billion a year by 2022 (per Fortune.com).

In the company’s third-quarter release they touted the growth of what they call “strategic imperatives”, which includes their enterprise cloud offerings and cognitive solutions like Watson, which makes up nearly 50% of their trailing 12 months sales and grew 10% over that period.

The company also returned $2.3 billion to shareholders in dividends and buybacks, just shy of the $2.5 billion in free cash generated in the quarter. Their current buyback authorization leaves only $1.5 billion so we should expect a re-up very soon.

One thing is clear, IBM is NOT one of the large beneficiaries of corporate tax cuts, in Q3 their effective tax rate was only 11%, a large contributor to their earnings beat, on the Q3 call the company guided analysts to expect “IBM’s ongoing operational tax rate would remain in the range of 15%, plus or minus three points“.

Investors will want to see progress in these strategic initiatives, which includes blockchain services, and off course restructuring updates and anything new on capital returns.

The implied move below the average over the last four quarters and in line with the ten-year average makes long premium directional trades into the print attractive for those with a convicted view. The at the money straddle (the call premium + the put premium) is the implied move, if you were to pick a direction, you only need to out-perform half the implied move.

Bullish, if you thought the stock could rally 5% this week following the print, or about $6.50, then…

Break-Even on April (this Friday) expiration:

Rationale: this trade breaks-even just below half of the implied move, and offers a max profit nearly 3x the premium at risk just above the average move over the last four quarters.

I’ll offer our normal disclaimer for long premium directional trades… you need to get a lot of things right to just break-even, direction, timing and magnitude of the move.

Hedge / Bearish: If you though the company will come in-line, or possibly beat but guide lower and the stock could go back to $150 in the coming days/weeks:

Rationale: this trade risks 1.3% of the stock price to make a bearish bet or hedge a long position into a potentially volatile event offering a potential payout of up to 4x the premium at risk.