Netflix (NFLX) will report their Q1 earnings tonight after the close. The options market is implying about a 9% move in either direction, which is rich to its 7% average one day move over the last four quarterly reports, but shy of its 10 year average of about 13%.

NFLX is up an astounding 60% year to date, after registering gains near 70% in 2017. Investors clearly think the company has reached an inflection point in their business model, with GAAP eps expected to more than double in 2018 as sales growth is expected to accelerate from 32% in 2017 to 36% this year, topping $15 billion. One cause for the inflection over the last two years… the explosion in international subscribers, which are expected to be nearly 3.5x that of U.S. in the quarter just ended. But just like NFLX’s growth trajectory sub growth in the U.S. that was coupled with an explosion in costs associated with their original content. In the company’s quarterly shareholder letter from January 22nd, the company suggested that the $2 billion in negative free cash flow, the result of programming nearly $6 billion of original content, on its way to $8 billion in 2018:

There are many bulls in the name who compare this strategy to that of Amazon’s over the last decade, which by all accounts has been a unique one, possibly a result of the record low interest rates causing investors to seek risky investments that could yield the sort of returns that stocks like AMZN and NFLX have done, despite minimal profitability.  You guess is as good as mine on that, but investors seemed ecstatic following the company’s Q4 results on Jan 22, as domestic and international subs both handily beat expectations, outweighing the larger than expected negative free cash flow, the stock rallied 10% to a new all-time high. Last week Moody’s debt rating service actually raised their view on NFLX’s debt, citing a long off reversal in free cash flow trends:

We expect the steady subscriber growth, together with gradual price increases will outpace the increasing investment in content and the upfront working capital spending on self-produced and owned programming, resulting in steadily improving margins. We believe that those margins will need to grow from the 7% range of 2017, to the low to mid 20% range to generate positive cash flows. As a result, we forecast the company becoming cash-flow positive in approximately five years.

There is one very big difference between AMZN and NFLX, NFLX is a discretionary expense, while AMZN has embedded themselves in US consumers daily lives, has become a sort of utility, with multiple levers that will eventually be pulled away from retail, (some already have been like AWS) as the company continues to spend on emerging tech platforms like its Alexa voice assistant and the associated echo hardware, original content and delivery to compete with NFLX and a fledging web search business.

From a technical perspective, the only real resistance is at last month’s prior high at $333, while this month’s low at $275 could serve as support, while the post Q1 gap level at $250 should serve as massive technical support: 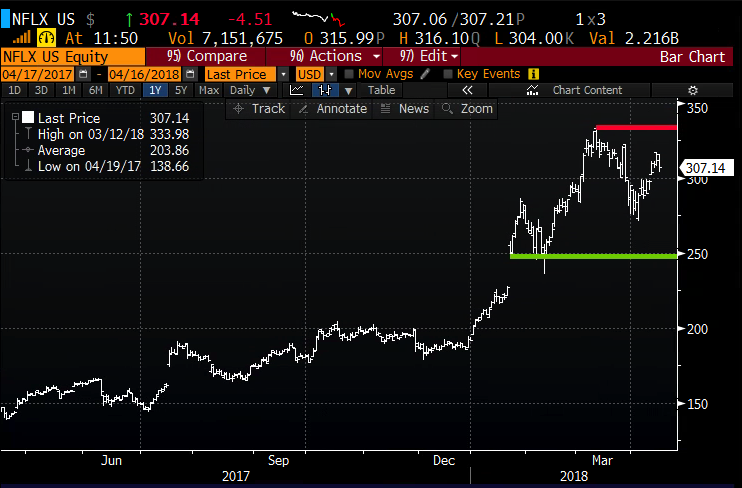 Short-dated options prices have exploded over the last month and despite the stock recovering from recent weakness, it is down in-line with the broad market from the highs, but still up 60% on the year: 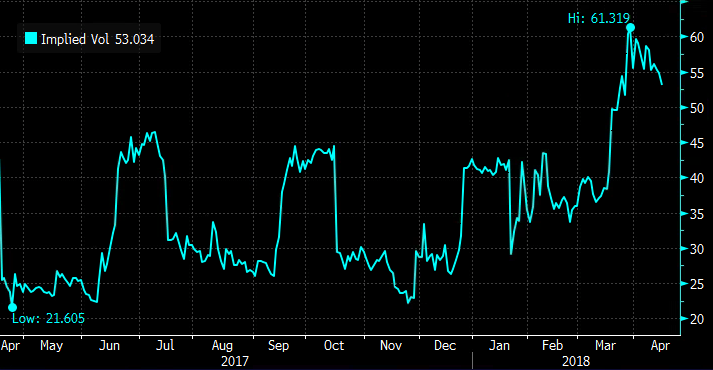 These expanded levels of short-dated options provide long holders of the stock to structure trades that benefit from what will certainly be a vol crush this week after the event.

Bullish, if you are inclined to play for a 10% move this week, but don’t want to add stock but are looking to overlay an options strategy to add leverage to your existing position, 1×2 call spreads against your stock could do the trick:

Losses of the stock below current levels.

Rationale: if you think the stock can rally 9% this week, in line with the implied move following earnings this trade strategy offers a potential yield of 5%.

Hedge, if you are long the stock and worried above disappointment, but don’t want to sell, consider collaring your stock.

Gains of the stock up to 335, stock called away at 335 but you can always buy back the short call to keep the long stock position in place.

Losses of the stock down to 282.50, protected below that level.

Rationale: one would collar long stock if they want to hold onto to stock, but worried about the potential for a sharp decline following an event like earnings, but most importantly are willing to give up some potential upside for some defined protection to the downside.