Last night on CNBC’s Closing Bell I was asked my opinion on Boeing (BA), and react to Citibank’s industrial analyst’s comments that morning on the stock, per theFly.com:

Citi analyst Jonathan Raviv sees a path to 50% upside in shares of Boeing (BA), or a stock price above $500. The analyst keeps a Buy rating on the shares with a $415 price target. Airbus (EADSY) hosted its annual meeting on Wednesday, and surrounding media chatter touched on potentially raising A320 rates to greater than 70, although there’s nothing official from the company, Raviv tells investors in a research note. Dropping that into Boeing’s free cash builder supports a stock above $500 at an attractive 7% free cash flow yield, the analyst writes. He sees this as “one of several paths” to share upside for Boeing. He believes both sides are incentivized to maintain delivery plans and keeps a Buy rating on Boeing shares. Raviv believes the stock remains cheap at current levels.

My view, $500 is one of “several paths” the stock may take in the future. Shares of BA are up nearly 100% in the last year, nearly 150% from the 2016 election. The fact that the stock has only sold off 11% from its all-time highs made in February while outpacing the 7.5% decline in the S&P 500 (SPX), I would say its still pretty healthy relative strength, especially considering the stock is up 12% on the year. 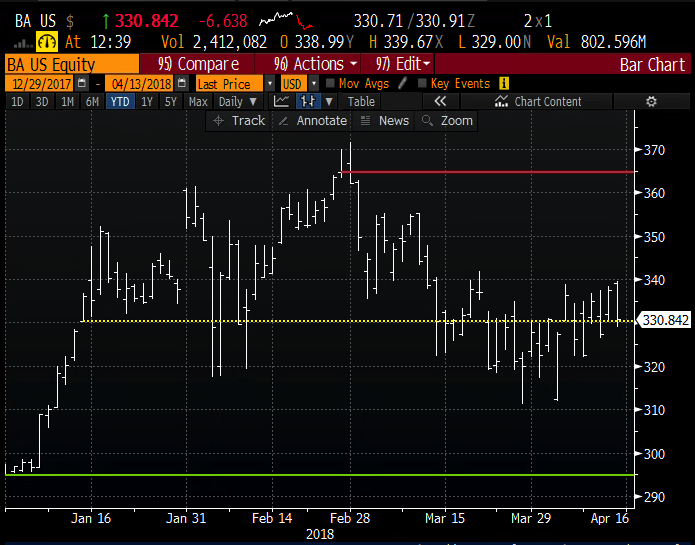 The stock is in no-mans-land from a technical perspective. Valuation I guess is just ok for this year, trading 23x expected eps growth of 18% and a tad better for 2019 at 20x expected eps growth of 18%. The question is what is priced into the stock as we head into Q1 earnings the week after next? I suspect a lot, especially with the potential headwind of a trade war with China. If the company were to beat Q1 which is widely expected and offer cautious guidance, the stock would be on its way back to $300 in my opinion and likely dragging the rest of the industrial space with it.

So lets look at the XLI, the etf that tracks the space, which BA is the largest weighted component at 8%. The XLI is down about 8% from its highs in Jan, a tad better than BA, but it has not enjoyed the outperformance of BA over the last year. XLI is made up of a group of industrial and transport stocks, two big ones that makeup 10% of the weight are expected to report next Friday morning, General Electric (GE) and Honeywell (HON).

From a technical perspective, the downtrend is pretty clear, with bounce potential to the trend near $77.50, while a break of the February and March lows near $72 would put support at the Sept breakout level near $72: 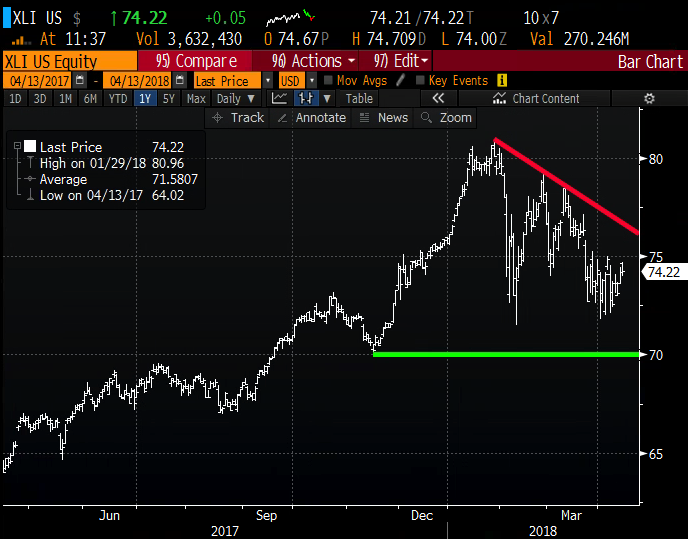 Industrial stocks are not cheap, most trading above a market multiple for growth that is very dependant on increasing global growth, at time where it feels like headwinds are mounting. I suspect that most components (ex GE) will report decent (as expected) Q1 results but might offer mildly cautious guidance, and we could see a reaction in the space similar to that of the banks today following JPM, WFC and C’s results.

So what’s the trade? If you think there is a lot of good news priced into sectors like industrials which saw significant benefits from December’s tax cuts, perceived benefits from the global synchronized recovery narrative and that Q2 guidance might lag expectations, than targeting the recent lows over the coming month makes sense.