Facebook (FB) CEO Mark Zuckerberg’s two appearances in front of Congress this week sucked nearly all of the air out of financial and tech media this week. Despite what most would agree was a mixed performance from Zuck, the stock has rallied nearly 5% on the week as it became clear that they would be little fireworks. From where I sit, I suspect the scrutiny on FB’s business is really just getting started, and while the stock is down 15% from its all-time highs made in early February, it is up 10% from its recent lows made late last month. I think there is a very good chance the stock will spend the better part of the balance of the year within the 52-week range. Near-term $150, last months low will server as important psychological support, while the 52-week low of $140 would be the next stop if it goes through $150. On the upside, the March gap on news of the Cambridge Analytica breach in the mid $180s should serve as technical resistance: 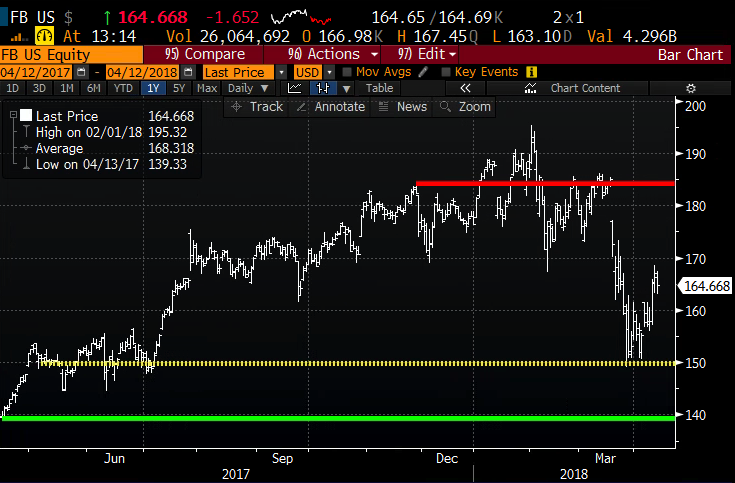 This past Friday when the stock was at $160 I detailed a collar strategy for those who are long FB, want to continue to hold but are willing to give up some potential near-term upside in place of defining risk to the downside (read here).

All the visuals of Zuckerberg literally in the hot seat got me thinking of the OG Tech Nerd, Bill Gates when he was hauled before Congress back in the spring of 1998, prior to the US Government ruling in 1999 that Microsoft was a Monopoly and ultimately should be broken up (great timeline here from Wired). The company ended up settling with the government in 2001, and was ultimately not broken up, but some of the remedies and the damage done to MSFT’s reputation cast a pall over the company and the stock for more than a decade. MSFT traded between $20 and $30 for most of the time between 2001 and 2013: 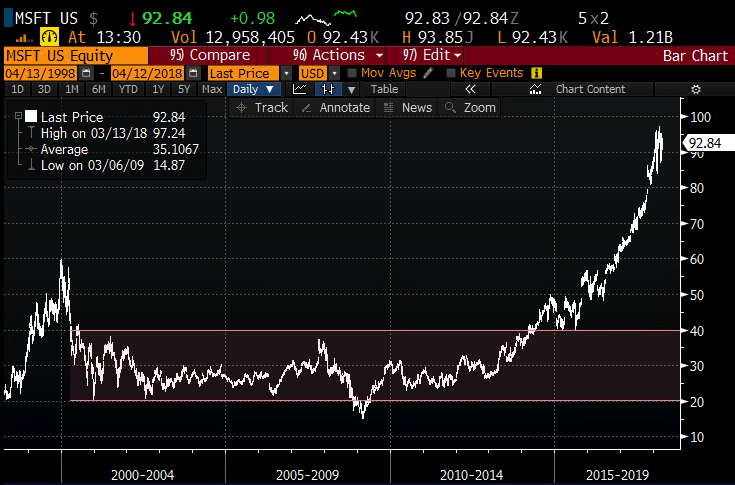 Since that breakout in mid-2014, shortly after a CEO change, the stock, and the company’s performance have been a big driver for the tech narrative and the explosion in the sector’s weighting in the broad market. MSFT is currently locked in a death match for the number two market cap spot behind Apple’s (AAPL) $884 billion with Alphabet (GOOGL) and Amazon (AMZN), all around $700 billion.

While the move from 2014 looks parabolic, shares of MSFT have demonstrated some nice relative out-performance over the last month, down only 4% from its all-time highs made in March, and basing for most of 2018. With the company set to report fiscal Q3 earnings on April 26th I think its safe to say that new highs could easily be in order, maybe finally touch the nice round number of $100 on a beat and raise. 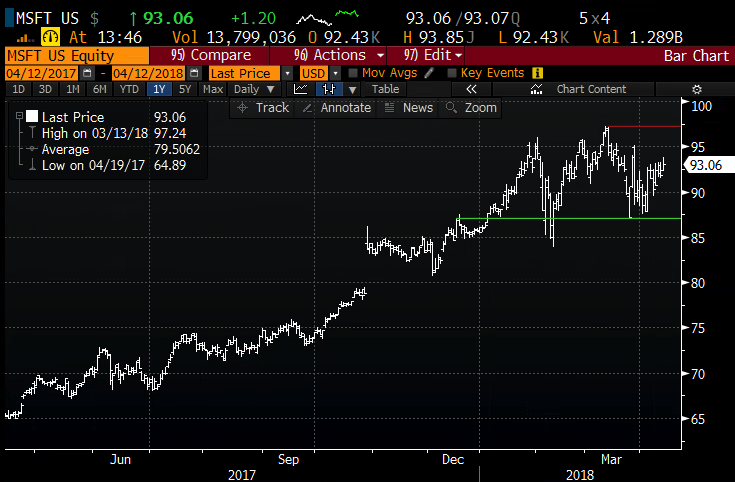 But I think it is important to make one more distinction between MSFT and FB, while supporters of FB at current levels are pointing to the fact that it is cheap as chips, assuming that there is not a meaningful impact on earnings or sales, trading 22.7x this year’s expected eps growth of 20% on 36% sales growth, and 19x 2019 expected eps. On the flip-side MSFT trades just below 24x fiscal 2019 eps which are expected to only grow 9% on 9% sales growth.

So where do I shake out on both stocks? I’d like to see FB management give very conservative guidance when they report Q1 earnings on April 25th, causing Wall Street analysts to follow with estimate reductions. If this were the case the eps multiple would appear much higher, but offer the potential for the company to outperform.

Profits of stock up to 100, stock called away at 100, but can always buy back short call to keep the stock position in place

Rationale: One would only collar a long stock position into an event like earnings if they are more interested in defined risk to the downside than unlimited upside.