With Facebook (FB) CEO Mark Zuckerberg set to testify in front of Congress momentarily, it feels like the entire investment community is bracing for some sort of regulation on social media and online advertising companies who have failed repeatedly at securing user’s data. Shares of FB are down 17% from their 52-week and all-time highs made on February 2nd, but interestingly social media peers Twitter (TWTR) and Snap Inc (SNAP) are down far more from their 2018 highs (22% and 31% respectively). I suspect this relative underperformance has something to do with with the potential that these two much smaller and immature companies would face far greater challenges complying with new regulations than FB, a company that is expected to have $55 billion in sales this year, with net income just below $22 billion, and close to $42 billion in cash on their balance sheet with no debt. One might also consider the fact that if there was any take-over premium in TWTR and SNAP after both posted strong Q4’s that it is coming out as they may be little appetite for traditional media companies to dip their toes in the now very murky waters of social media and the regulations that might come with.

Its worth noting that while Google parent Alphabet (GOOGL) gets most of their sales from online advertising, they get most of their data from searches, not from a sort of social graph that Facebook does. But GOOGL’s foray’s and subsequent failures in social media will not make their massive ad business, expected to be above $100 billion this year, immune to any incoming regulations. Investors have taken notice, shares of GOOGL are down 13% from their 2018 highs. Wall Street pundits repeatedly speak to how cheap shares of GOOGL are, for a company with an expected $100 billion in sales growing eps (gaap, 30% adjusted) and sales at 20% is truly astounding. But I think in the current environment it makes sense to not only use gaap estimates when comparing to growth but also discount future eps growth at the very least as new regulations are most certainly come with increased costs and lower profitability.

Obviously, there is a chance this whole thing blows over, and in this whole hub-bub over user data proves to be nothing more than a speed-bump, and a great buying opportunity for both stocks, but who knows.

For those who think this is a buying opportunity, at a time where broad market sentiment and market volatility has been abnormal to the recent path, then it makes sense to define one’s risk to make a contrarian bet and use options structures that help mute relatively high options prices.

Let’s look at GOOGL as they are not in the eye of the current storm. The next identifiable catalyst for the stock will be Q1 earnings on April 23rd after the close. The options market is implying a $65 move, or about 6% in either direction between now and the close on April 27th (most of that is for the one-day post-earnings reaction on April 24th). 30 day at the money implied volatility is just below 34%, well above the prior four levels into earnings, making long premium short-term directional bets a tough way to make money into the print: 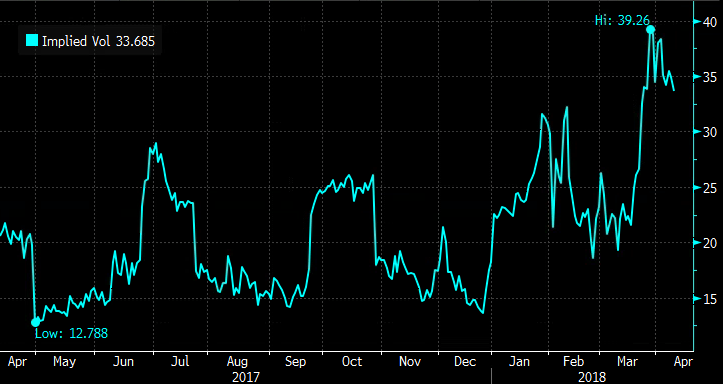 The stock chart shows $1000 as fairly important 1-year support, a level that served as technical resistance last year until its late October breakout to new all-time highs, and has served as technical support in December, February and over the last week or so: 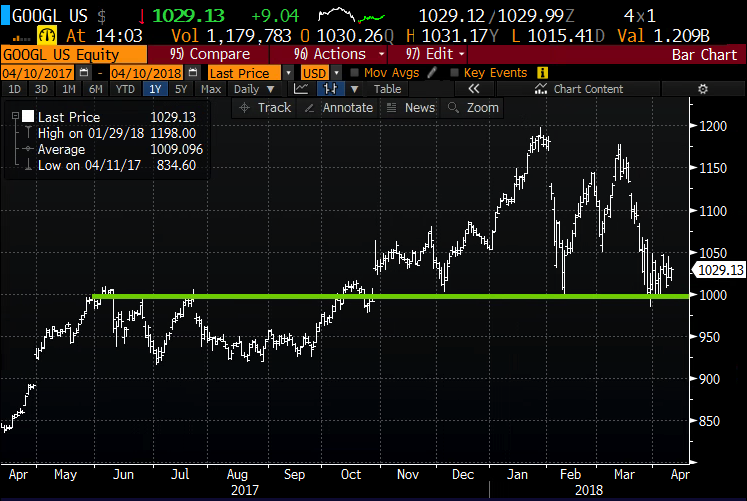 So what’s the trade from the long side? Call butterflies… looking to own a near or in the money clal, and sell two out of the money calls, near technical resistance:

Rationale: this trade structure offers near the money participation to the upside, below the implied earnings move and risks only 2% of the stock price while offering a wide range of potential profitability on the upside.