Earlier I posted a trade idea on Alphabet (read here) using Facebook CEO Mark Zuckerberg’s testimony in front of Congress to frame it. I highlighted the relative underperformance in social media peers Twitter and Snap Inc:

Shares of FB are down 17% from their 52-week and all-time highs made on February 2nd, but interestingly social media peers Twitter (TWTR) and Snap Inc (SNAP) are down far more from their 2018 highs (22% and 31% respectively). I suspect this relative underperformance has something to do with with the potential that these two much smaller and immature companies would face far greater challenges complying with new regulations than FB, a company that is expected to have $55 billion in sales this year, with net income just below $22 billion, and close to $42 billion in cash on their balance sheet with no debt. One might also consider the fact that if there was any take-over premium in TWTR and SNAP after both posted strong Q4’s that it is coming out as they may be little appetite for traditional media companies to dip their toes in the now very murky waters of social media and the regulations that might come with.

Given the broad market’s bounce the last couple days off of important technical support, and FB’s bounce of 3.5% as I write during Zuck’s testimony, I think it makes sense to look at SNAP, which is up less than 2%, but down 30% from recent highs, but more importantly having found some support after filling all of its nearly 50% one-day earnings gap from February 7th: 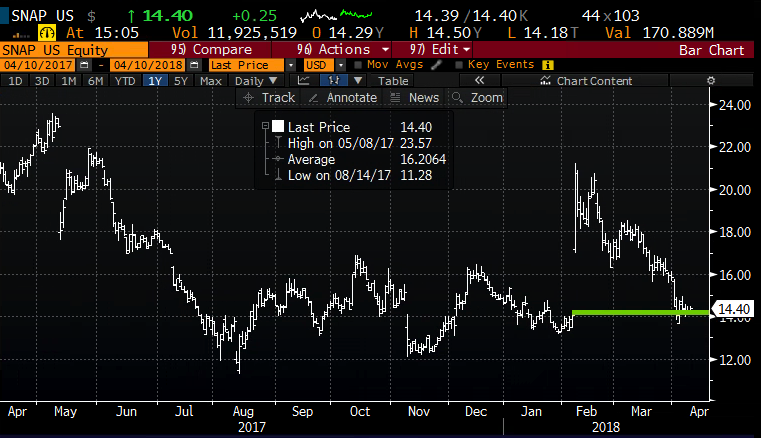 The quarter was surprisingly good, and shorts got caught off guard obviously,

So why has the stock sold off? Obviously, the Facebook news doesn’t help, the broad market volatility has not helped, and users have hated the redesign of the product. The company is making some tweaks to the redesign and I suspect they will fix the issues. But while the new eyeballs on FB might have taken the take-over spec out of SNAP, and possibly cause them to deal with increased regulation it might also offer SNAP a window to advance some of their strategic initiatives without FB squashing them in a way that SNAP could make the case to the Feds that they are being anti-competitive.

The next identifiable catalyst for SNAP shares will be their fiscal Q1 report on May 1st, the options market is implying a freaking 17% move between now and then. I am long the stock at these levels playing for a bounce, but if I were inclined to play with defined risk I might consider the following trade idea: