Timing directional bets or hedges in broad market indices / etfs is nothing short of a challenge for even the very best of investors/traders. I, on the other hand, am almost always early on these sorts of trades (see IWM from last month here and the update from last week here). While long premium options strategies like buying puts or put spreads define one’s risk when making a directional bearish bet, as was the case in the April IWM put spread, it is naive to think that these trade structures are not immediately challenged as you need to get a lot of things right to merely break-even, first and foremost direction, magnitude of the move and ultimately, and most importantly timing of said move. Owning options is a moment to moment battle with the decay of the options vs the underlying’s movement in the intended direction.

Around the same time of the IWM put spread, we detailed a long premium bearish trade idea in the QQQ, the etf that tracks the Nasdaq 100, also early on that one 😉 read here, but this one worked out alot better and have this one where we want it, this week’s update here.

Given the market’s bounce since yesterday’s low, and the fact that I have taken profits, or in the case of IWM, slinked out with a very small gain, I wanted to quickly take a look at the S&P 500, or the etf that tracks it the SPY, because it acted very different off of the Feb lows than the IWM or the QQQ. Unlike the IWM’s nearly matched high in March, and the QQQ’s new high, the SPY never really got close to a new high, and this relative underperformance might make it the most vulnerable of the three if were are to make lower lows in the coming week/months.

The one year chart of the SPY below has a couple important technical levels worth discussing. First, the rejection in late Feb and mid-March at 280 makes a very strong case for staunch technical resistance in the near-term. While Tuesday and Wednesday’s bounce off of the uptrend that has been in place for the last year is important, if not precarious support. 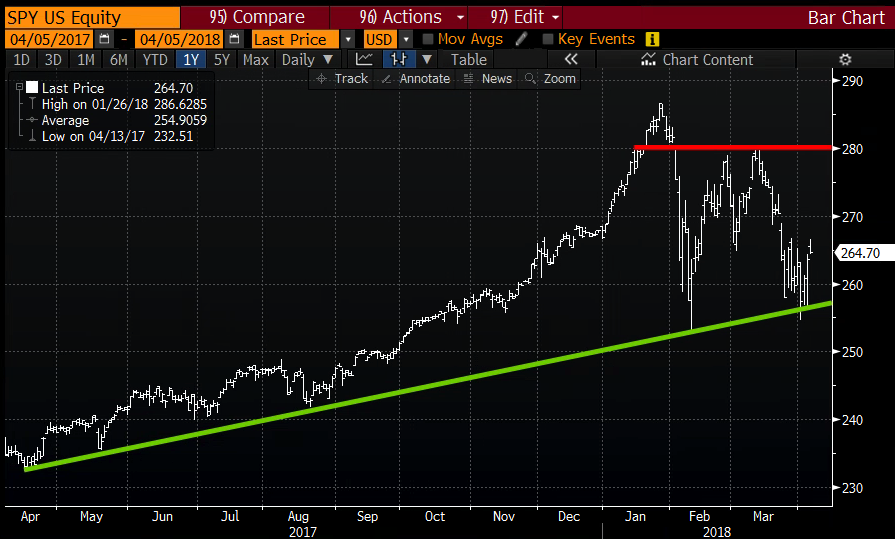 All of this volatility has caused options prices to increase dramatically in the last month, despite being well below the February highs, but still up more than 100% from its 2018 lows. 30 day at the money implied volatility is about 17%, implying about 2% daily moves, which is nearly 3x of the implied movement at its 52-week lows, but interestingly below its 30 day realized volatility (white line, how much spy has been moving): 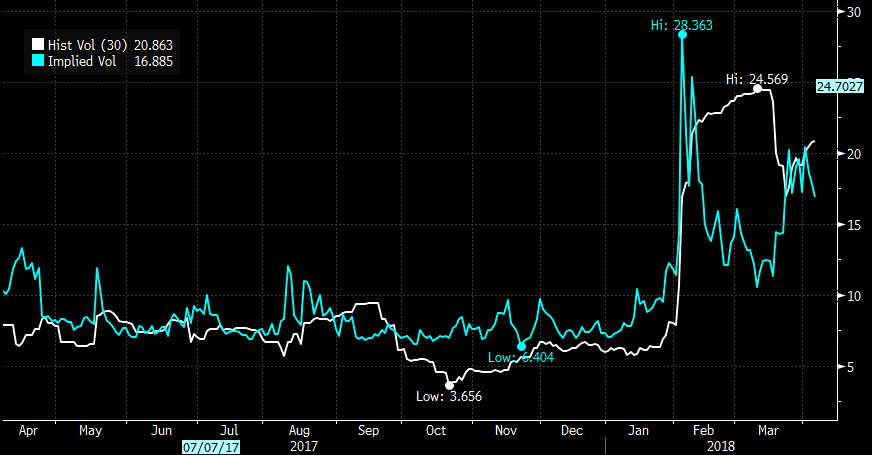 This is a pretty tricky set up for those thinking about slapping on protection with SPY or making an outright bearish bet. For one, if the SPY settled down, options prices would come in hard, with IV likely headed towards 10%, making long premium strategies challenged if a another round of selling doesn’t materialize.

That said, SPY options are still too dollar cheap to sell in my opinion.  With the SPY at 265, the June 280 call is $1.60 bid, that would be a bad sale, even if you thought the chances are very low that the SPY would be north of 280 on June expiration. The options market is saying there is only a 20% chance of that.

Alternatively, the June 265 straddle (the call premium + the put premium) is offered at about $16, if you bought that, and thus the current implied movement between now and June expiration, you would need a rally above $281, or a decline below $249 to just break-even. Looking at the range in the one year chart above, that seems unlikely that we see prices above $280, but if the SPY were to break the uptrend then $249 could easily be in the cards. But it might make sense for $270 first…

SO if I were inclined to play for $250 I might consider the following long premium trade:

Rationale: This trade structure offers a nice risk -reward if you are convicted we don’t have much more of a bounce and are to break the uptrend soon. But if you are wrong on entry timing, as I often am, I nearly always put out my “re-short” too early, then you have a situation like I was in with the IWM trade over the last month, and at best you wiggle out if and when the market finally retreats. It is important not to mistake defined risk for bad risk, so it really comes down to conviction level and/or how badly you want to protect your portfolio. For portfolio hedges I would also add that one needs to be tactical, and not buying protection to frequently as it can be a massive drag on performance. That said, if the market were take out the recent bounce level things would get ugly fast, and $3 only represents about 1% of the underlying.