Heading into next week’s start of the Q1 earnings season I am considering a whole host of inputs for the first group to report en masse, banks. Next Friday before the open 25% of the weight of the XLF (the etf that tracks the banks) will report their Q1 earnings: Citigroup (C), JP Morgan (JPM), PNC Financial (PNC) and Wells Fargo (WFC). You know the drill among these large money-centers… JPM best of breed, but still down 10% from its February highs, in-line with the broad market. Citi, showing some recent under-performance since late January, down about 16%, but often cited as the one that is the cheapest and has the most potential to increase capital return. And then there is WFC, whose last two years have been marked by some fairly unseemly sales practices, government crackdown, fines, lawsuits, and management turnover. Like the rest of the sector though, in late January the stock was trading at new all-time highs, but since has declined about 22% and in about two months has gone from 52-week highs to very near 52-week lows. 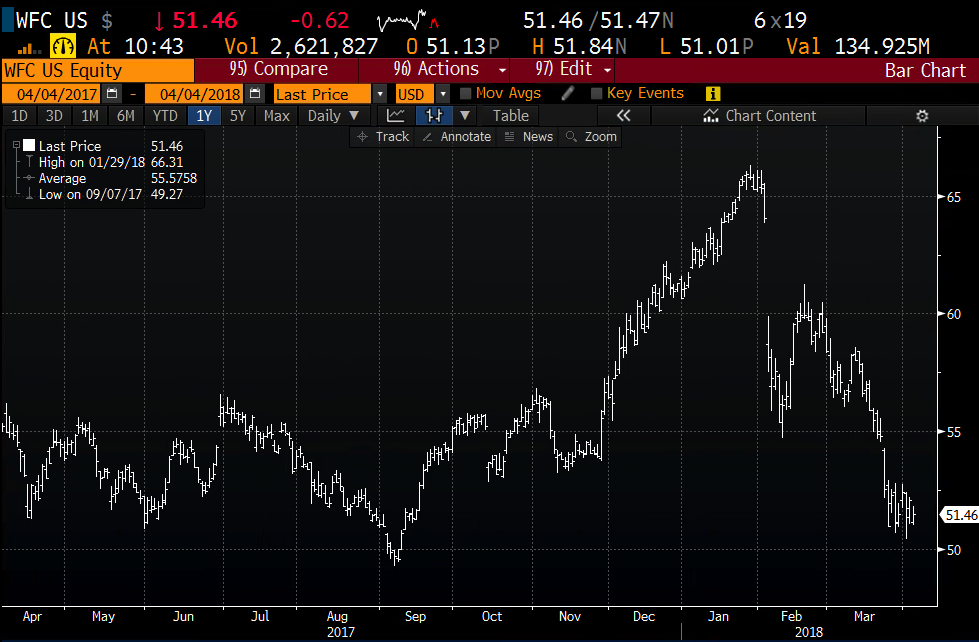 From merely a technical perspective, the low $50s looks like pretty healthy near-term support. But as we head into the companies Q1 call, the cause for the early February gap lower will be front and center. To refresh your memory, on former Fed Chair’s last day in office, Janet Yellen’s office censured WFC suggesting, per the New York Times; “Until the firm makes sufficient improvements, it will be restricted from growing any larger than its total asset size as of the end of 2017″. Many analysts see these restrictions lasting at least through the end of Q3. Consensus estimates still expect meaningful eps growth this year to the tune of 15% (gaap, 19% adjusted) on only a 1% yoy sales decline.

Thinking about what the beleaguered management might say on their call next Friday, I am hard-pressed to think there will be anything but a healthy dose of humility and caution in their forecast. With that in mind, it makes sense to look back at technical levels. The Feb gap from all-time highs, to about $60, which was also the breakout level last December, should serve as staunch technical resistance. The $50 level could serve as mild near-term support, while 2016 low, at the height of their cross-selling scandal, should serve as slightly better support: 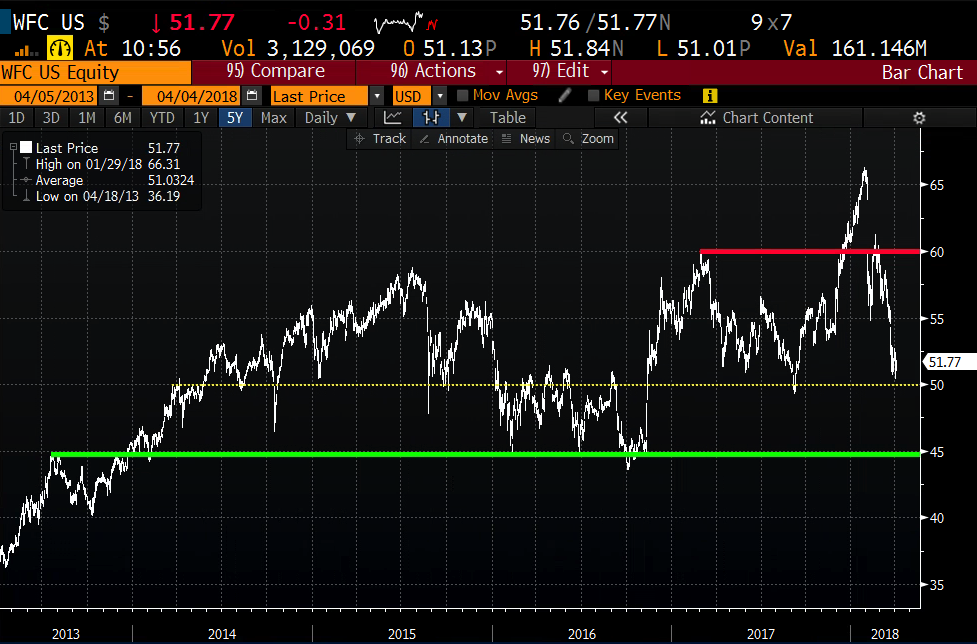 But its important to caveat those technical levels, there is nothing scientific there, and the fact that the companies fundamentals are in the near term in the hands of the government could cause “mild” or “slightly better” support levels to be eclipsed by one tape bomb. Which probably brings me to the most important chart, the long-term one, since 2000, with an uptrend from its financial crisis lows in early 2009: 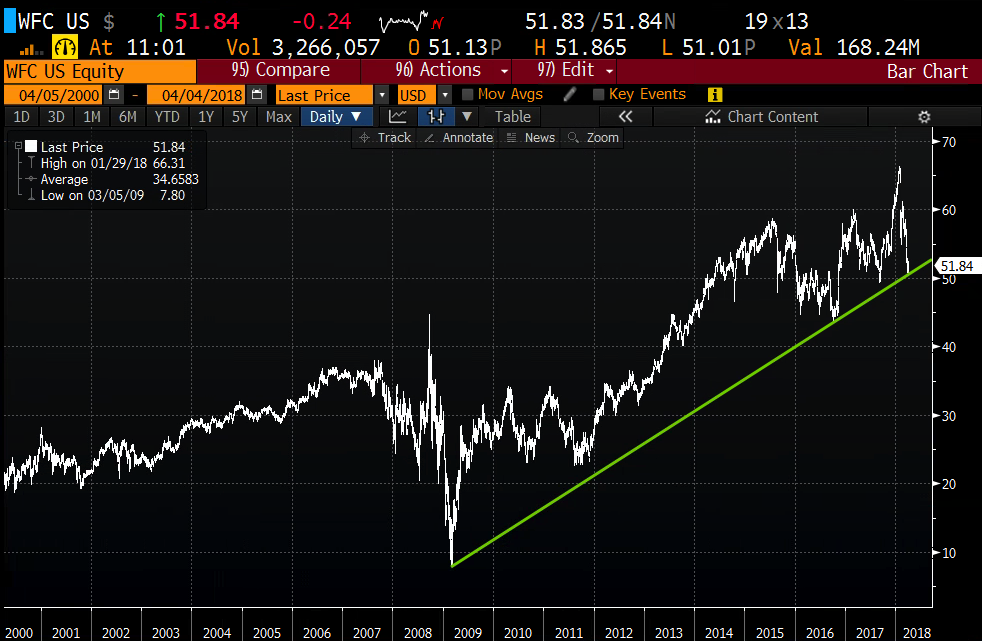 As my good friend, and real technician Carter Braxton Worth of Cornerstone Macro Research has taught me, a good trend is one that connects at least two meaningful highs or lows. You don’t need to be a chartist extraordinaire like Carter to see that WFC is sitting on massive long-term technical support!

So what’s the trade into the print? If I were inclined to play for a bounce in bank stocks I would likely buy the XLF, or calls, or call spreads. As for WFC I would avoid on the long side, reiterating what is likely going to be a subdued tenor and guidance from management. If I was long the stock, do not want to sell, I might consider hedges at this important long-term technical level. If I were very bearish on WFC, with the thought that there is another shoe to drop I might target a breakdown below $50 to the mid to low $40s and look to October Expiration and capture three quarterly earnings reports (Apr, July and Oct).