A few weeks ago we checked in on the Semiconductor stocks amidst the renewed volatility in the market. Volatility we haven’t seen for quite some time. The reason we wanted to look specifically at semis was their outperformance versus the Nasdaq and SPX to start the year. Despite being down with the broader market on this selloff, the SMH was still up 10% ytd vs the SPX which had gone red. From March 23rd:

The SMH, despite being down nearly 8% from its intraday all-time high on March 13th, the etf is still up 10% ytd, vs the SPX which is now down 1% on the year and the CCMP up 3%.

The outperformance in the SMH has comely largely from continued positive sentiment related to a continuation of M&A activity that has topped $300 billion over the last few years, a supercycle in chips of all kinds for emerging technologies like AI, Autonomous Driving, AR/VR, Crypto Mining, and a longer than normal memory cycle.

In the last few weeks though there have been some speedbumps in this narrative.

Additionally, Micron (MU) which had been on a ridiculous run was down 6% on the day after what should have been taken as good news. That was a sign that maybe sentiment was shifting. Here was the trade idea we detailed on March 23rd:

With the market tanking again today and the SPX now below and important support level it’s a good time to check back in on this SMH trade. With SMH now $100 and at the midpoint of the spread, this trade is worth $4.00 versus the initial $2.50 at risk. Intrinsically it is worth $5 (if the stock closed here on May expiration) so it has extrinsic value yet to be realized. I think it makes sense to stay patient on this trade. The SMH is still outperforming the SPX, the broader market is at or below the lows it put in in February, while SMH is still $5 above its lows from Feb. This trade targets those Feb lows and this could turn into a pretty nice trade if that were to follow through on the downside. If the broader market were to reverse off today’s selling it may make sense to then close this trade while it’s still profitable on a bounce. But if selling persists, patience would pay off as 95 is the obvious target for SMH on the downside. 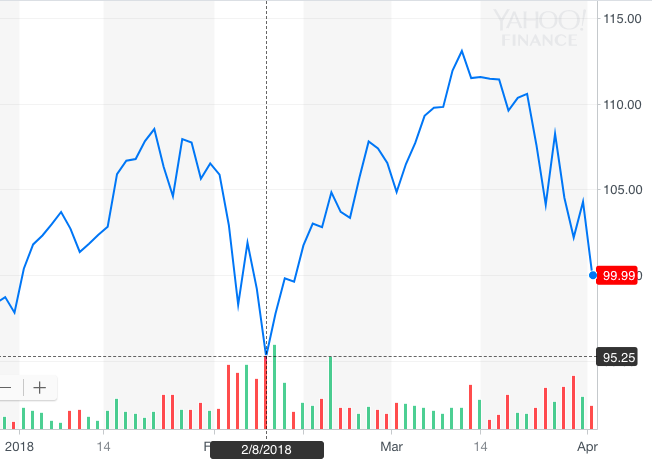