Tomorrow shares of Spotify will trade through a direct listing on the New York Stock exchange. This is not an IPO as the company is not selling shares to the public, but they are listing their shares to offer liquidity to existing shareholders, most importantly, employees.  Yesterday the WSJ had a very succinct article detailing the differences between and IPO and a direct listing:

It is unprecedented for a company as big as Spotify—which by mid-March was valued as high as $23.6 billion—to go public on the NYSE via a direct listing, though the process is often used for lower-profile transactions, such as a spinoff or emerging from bankruptcy.

Spotify has said it chose a direct listing because it doesn’t need to raise more money. It also says the process is fairer because it puts large and small investors on a level playing field. In a normal IPO, the underwriting banks can allocate shares to favored clients ahead of the first trade, letting them benefit from any potential “pop” in the stock price.

Spotify is also saving tens of millions of dollars in fees by bypassing the IPO process, though it has hired Goldman Sachs Group Inc., Morgan Stanley and Allen & Co. as advisers. The banks will play a limited role compared with underwriters in a standard IPO, and Spotify will pay them only about €29 million ($36 million) in fees.

What’s interesting about the last bit is that the company is basically doing most of what is expected from doing an IPO, roadshow, engaged banks… sounds like they are just being a tad difficult as the WSJ article goes on to detail what these “advisers” are charged with doing tomorrow, which sounds pretty darn similar to what underwriters are charged with doing on an IPO:

Two firms have the job of keeping Spotify’s listing from going off the rails: adviser Morgan Stanley and Citadel Securities, which the company selected as its designated market maker. DMMs help ensure the orderly trading of NYSE-listed stocks and make money by quoting prices throughout the trading day and collecting the difference between the buying and selling price.

One of Citadel’s traders on the exchange floor will determine the price of the first trade in Spotify, in consultation with Morgan Stanley. Ahead of the open, the bank will gather information about the price ranges at which investors want to buy or sell shares. The DMM will find the optimal price to balance out buying and selling interest.

That is similar to how a typical IPO works. A key difference is that Spotify’s banks haven’t been running a formal process to gauge demand for the company’s shares, though Morgan Stanley has been working to assess interest. There also won’t be a “deal price” set the night before the listing, when underwriters usually sell shares to IPO investors. Without those steps, there will be less guidance for Morgan Stanley and Citadel to figure out the opening price.

There has been a flurry of trading over the past week in Spotify’s private shares, with prices as high as $137.50, up from a previous high of $132.50, according to people familiar with these trades.

It is unclear how many shares could trade on the first day. As much as 91% of Spotify’s 178 million shares will be eligible for trading, but people close to the deal said they expect the actual float to be closer to two-thirds of the shares, and for co-founders Mr. Ek and Martin Lorentzon to hold on to their stakes in the company, at least initially.

Because there are no underwriters, there have been many analysts who come out with research on the stock prior to the listing. RBC’s star internet analyst Mark Mahaney initiated the stock last week with a Buy rating and a $220 12 month price target. Here was Mark on CNBC late last week discussing what the stock will trade off of, specifically highlighting the fact that their paid subscriber base is 2x that of Apple Music and a business model that might be nearing an inflection point as far as gross margins are concerned, which are now currently a little more than half of Netflix’s, which is one reason the price target is about 5x their expected sales vs NFLX at about 7x.

Here are the highlights from Mark’s intiation note: 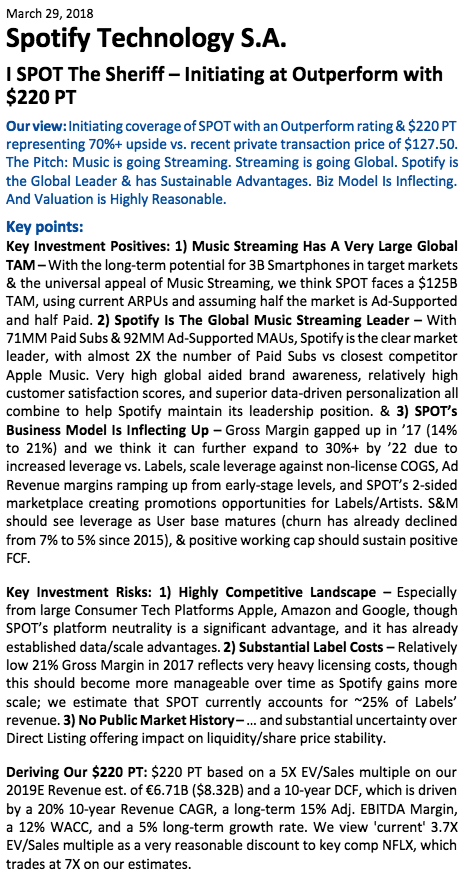 The revenue ramp is huge, expected to be near $7 billion this year, with maybe a 25% gross margin with subscribers that could go from 70 million to 90 million this year. The most important thing here is that the more users they have the better deal they can negotiate with record labels for licensing fees which could add significant leverage to their model and get them profitable quick. But those are all big IFs considering the competition like Apple and Amazon, in particular, are not going to let these guys just run away with this market without a fight…

So how’s the thing gonna trade? you guess is as good as mine… and it will certainly be fascinating but If this was a traditional listing, I suspect underwriters would pull the offering following a market like today’s with the Nasdaq Composite down more than 3.5% and internet-based companies stocks like NFLX down 6%, SNAP down 8%, GOOGL down 4% and Amazon down 5%. But if you read this blog post from Spotify Founder and CEO Daniel Ek, you will see that one of these kids is clearly doing their own thing (read here).

Some market participants expect the stock to trade near $25 billion, or about 20% of the value of Netflix which consensus sees raking in nearly $16 billion in sales in 2018, up 35% year over year, with over 100 million paid subs. The main takeaway here is that NFLX is expected to have gross margins close to 38%, far more profitable than SPOT, and as Ek says in his blog post today:

Sometimes we succeed, sometimes we stumble. The constant is that we believe we are still early in our journey and we have room to learn and grow.

I have no doubt that there will be ups and downs as we continue to innovate and establish new capabilities. Nothing ever happens in a straight line — the past ten years have certainly taught me that. My job is to ensure that we keep our foot on the pedal during the ups, so that we don’t become complacent, and that we continue to stay the course with a firm grip on the wheel during the downs.

We have a lot to do — we are only in the second inning — and I’m more excited than ever for the future.

Remember, tomorrow is just another day in our journey to fulfill our mission.

Let’s see how the thing trades after a couple hours in what could be a challenging market. I suspect options will be listed fairly quickly, within in a week or so so that’s probably when we will take a much closer look.