The other day we previewed ORCL’s FQ3 earnings event. Here’s some of what we had to say on the technical front. From March 19th:

While I generally leave the technicals to Carter… and I see what he sees too, but very near term I see something different when coupled with the potential disappointment on the fundamental front, I see the stock failed last week at short-term resistance: 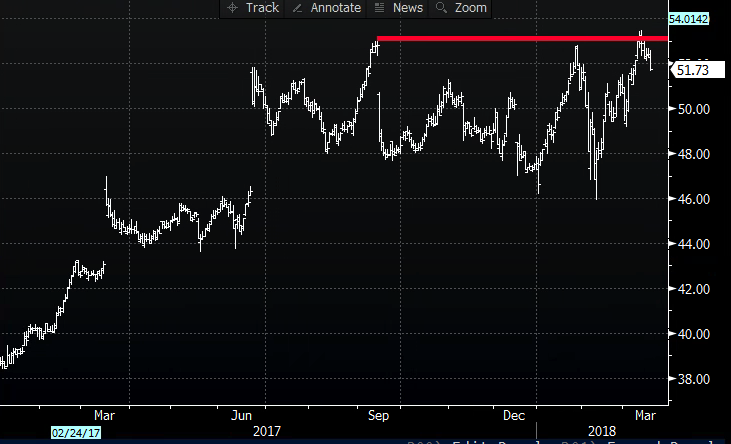 We thought there was assymetrical risk to the downside going into the event and detailed a hedge for long holders that could also be used as an outright bearish idea for those looking for a quick move lower. Here was that trade idea:

So What’s the Trade? For a hedge, or If you are inclined to play for a post earnings decline in line or greater than the implied move, with follow though in the coming weeks, you might consider the following defined risk trade idea:

ORCL disappointed with mixed results with one of the main concerns being a continued slowdown in the cloud business. The stock got slammed in line with our strike selection, it got as low as 46.50 yesterday. Today with the stock 47.25 the put spread is trading 3.70 versus the 1.50 initially paid.

Intrinsically this trade is worth 4.75, so there’s a bit more than a dollar left in premium that could come in if the stock remains at this level

But April expiration is a month away and alot can happen between now and then. The worst thing that could happen is this stock catches a bid and the gains are then at risk. (is it is outright). For those that were simply looking for an outright bearish trade, it probably makes sense to close this at a nice profit some time soon and move on. If the stock stays here it will get better, but it will take a few weeks for the rest of that value to be realized.

If it was a hedge it makes sense to rethink the strikes soon. The current hedge helped a decent amount on this decline but if the stock goes lower from here it can only be worth another 1.30, so anything beyond that to the downside and the losses in the stock go back to 1 to 1.

I think since the big move already happened you want to take as much off the table from this trade as possible now and then if rolling down and out, look for something dollar cheap that doesn’t use too much of the current put spread’s gains.