Micron (MU) will report their fiscal Q2 results tomorrow night after the close. The options market is implying about an 8.5% move between now and Friday’s close, or about $4,40. With the stock at $61, the March 23rd weekly 61 straddle (the call premium + the put premium) is offered at $4.40, if you bought that and thus the implied move you would need a rally above $65.40, or a decline below $56.60 to make money. The stock has moved 6.25% on average over the last four quarters, with three of the moves being higher. The stock has moved about 6.5% the day following earnings over the last ten years.

Shares of MU are up nearly 50% on the year already, up nearly 65% from its 2018 lows made in mid-February. To my eye, the technical support lies at the early March breakout at $50: 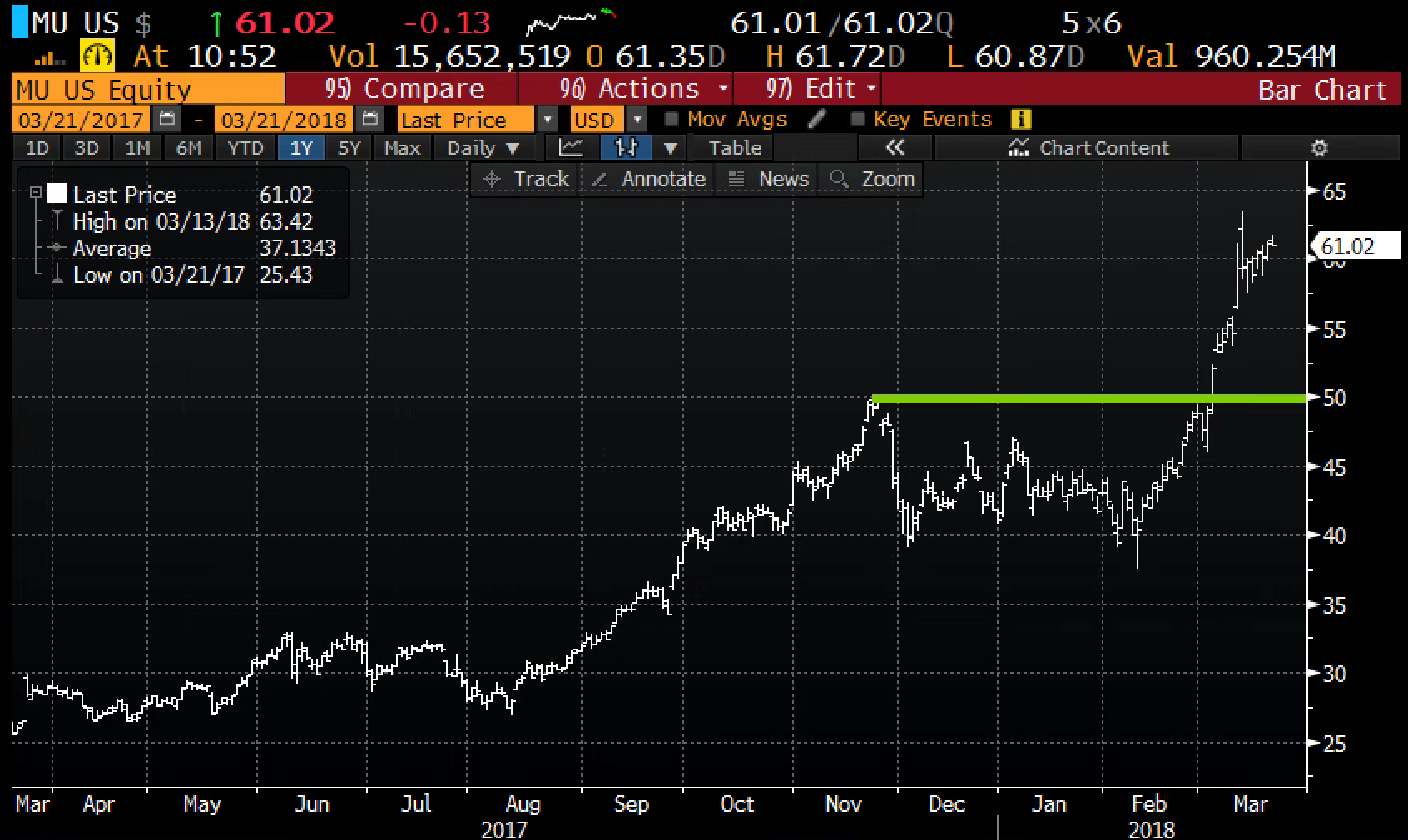 As far as overheard technical resistance, you have to go back 18 years to the top of the dot-com bubble, but by all accounts, this is a very different company, for one no longer makes pcs, and is expected to earn over $10 in eps in F2018 with nearly $30 billion in sales. 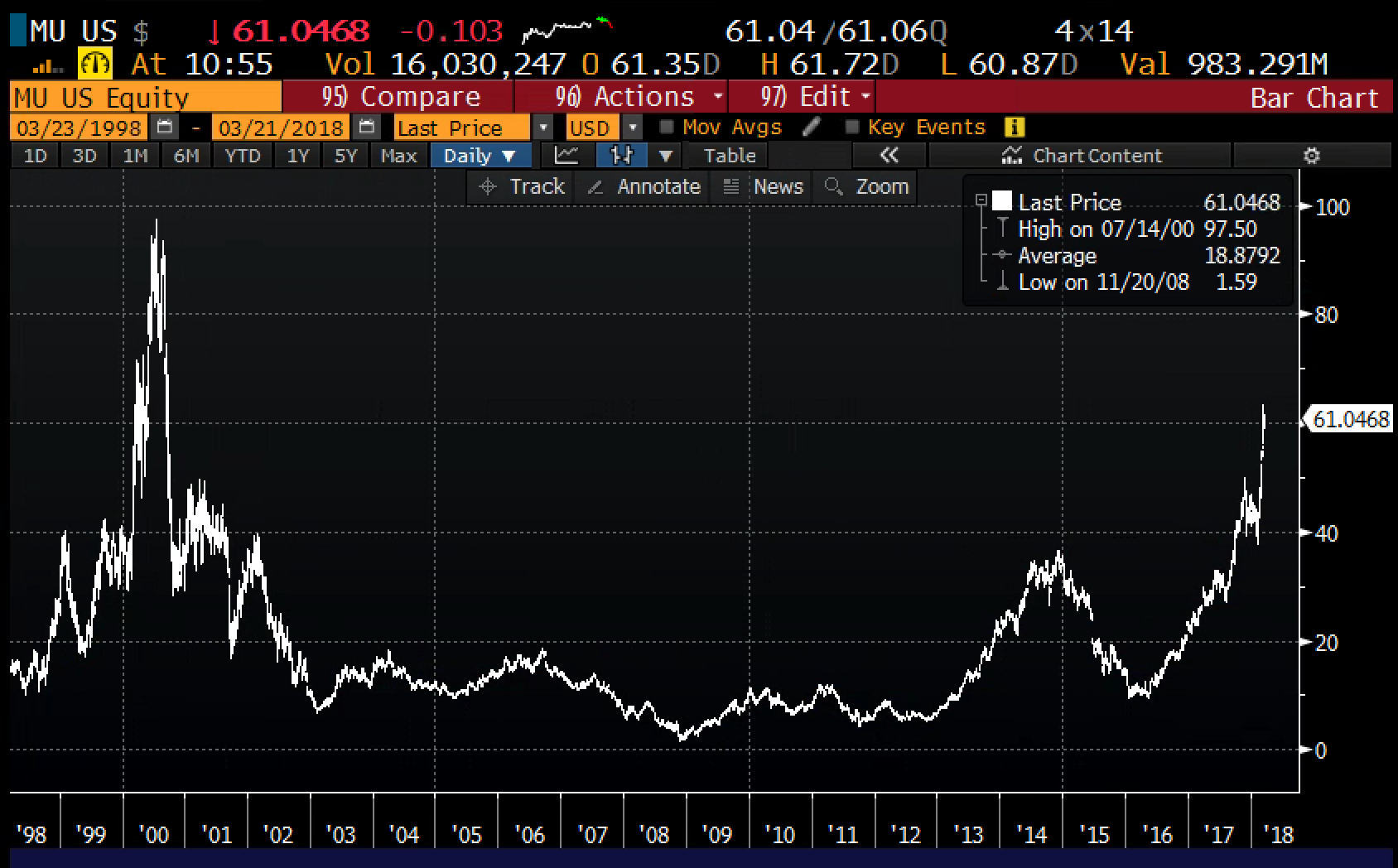 Wall Street analysts are getting outright giddy on the stock, with 25 Buy ratings, only 2 Holds and 1 Sell with an average 12-month price target of $65.64. In the last couple weeks we have seen meaningfully price target increases, one as high as $100, up from $60 by an analyst at RW Baird., while Susquehanna raised their target on Monday from $60 to $80.

Credit Suisse’s Semiconductor analyst, John Pitzer, widely believed to be one of the best in the space, who has had a buy on the stock with years and has a twelve-month price target of $70, titled his preview note; “Still Bullish, But a Bit More Subtle”. After such a massive run and sentiment so one-sided, it might make sense to be a tad cautious into the print…

Micron is a cheap stock, especially relative to its recent and expected growth, trading well below a market multiple and nearly every semiconductor/ memory peer, largely the result of the highly commoditized nature of its product. As Pitzer highlights in his note above though the stock is at prior historical highs on an enterprise value to sales basis. So the question is, where are we in the cycle? Does the stock’s more than 100% gains over the last year adequately discount a bit of good news? Your guess is as good as mine, but at the first sign of a meaningful deceleration in sales growth, and you have a situation where both investors and analysts are all on the same side of the boat. From its highs in late 2014, to its lows in early 2016, the stock lost nearly 75% of its value, despite a sales decline of only 25% that caused eps to get cut in half. You get what I mean with the cyclicality, costs are fixed and what might seem like normal sales adjustments after a boom period cause nasty eps declines, and result in even nastier corrections in the stock. 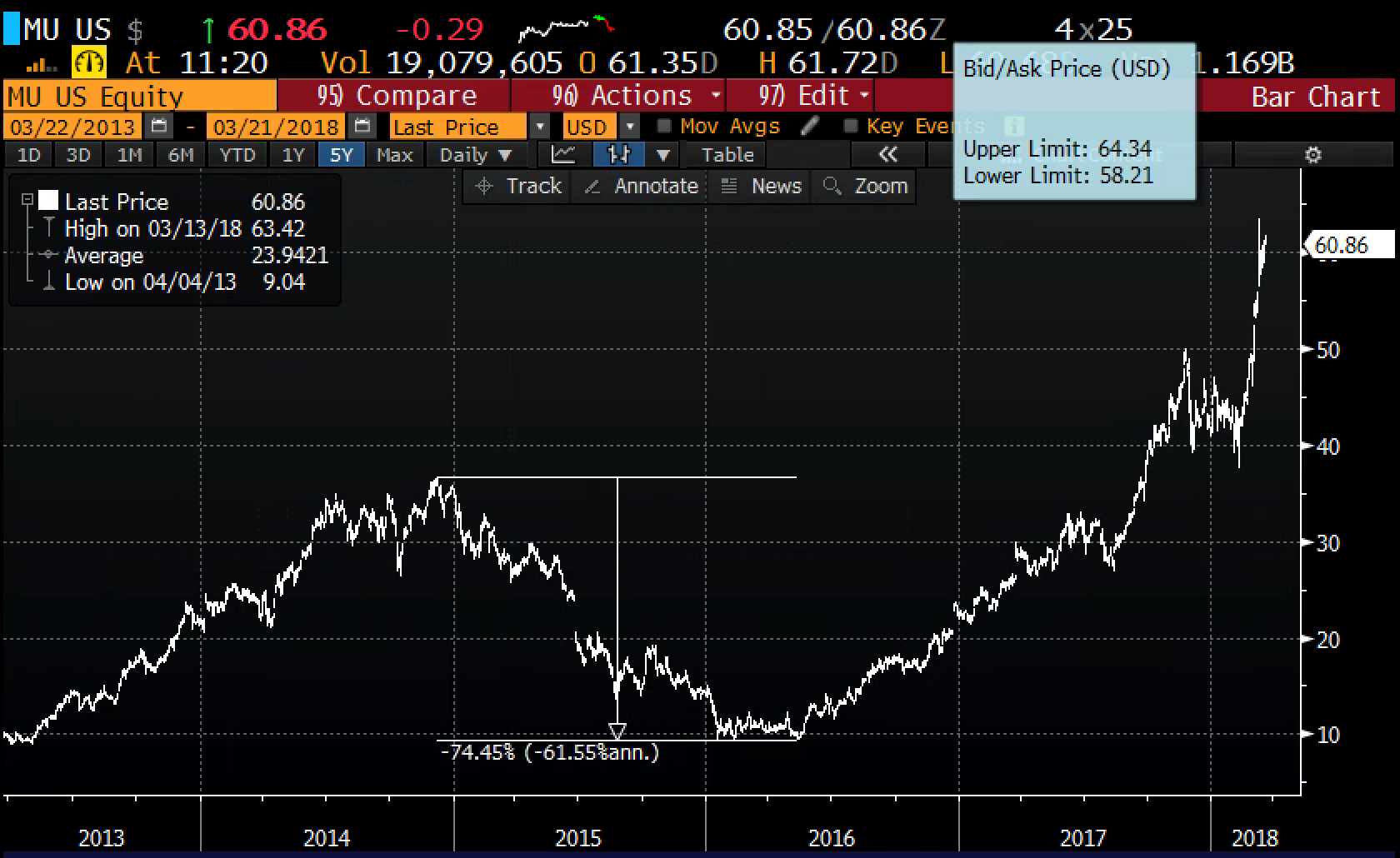 So what’s the trade? I got nothing for the longs… I guess you are just like the crypto peeps, ‘hodling’, so I’ll just offer up an overlay for long holders and a way to play/protect for a move back to $50 over the next few months, with defined risk.

Profits of stock of up to 9 between 61 and 70 stock called away at 70 but can always cover the short call if the stock were above 70 to keep the long position intact.

Rationale: one would do this overlay vs long stock if they wanted to keep long in place, wanted the potential to participate in further upside, but willing to give up some upside beyond a certain point for a specific amount of downside protection.

Rationale: options are expensive, so it makes sense to look to finance short-dated directional bets into the print with strategies like this. Put spreads look like a tough way to make money on a risk-reward basis, if you get the direction right on this, and the magnitude of the move in the next couple days, then risking $1, or less then 2% of the stock price to make a bearish bet with a wide range of profitability to the downside makes sense. But to be clear using weekly flies to play earnings is threading the needle.