Fedex Corp (FDX) will report their fiscal Q3 results tonight after the close. The options market is implying about a 3.5% one day move tomorrow in either direction, or about $9, which is rich to the average over the last four quarters of about 2.3% but in-line with the ten-year average.

Shares of FDX are up just below 2% on the year, but down about 8% from its 52-week and all-time highs made in mid-January. The stock is up 100% from its 2016 lows, having held the uptrend like a boss, with its February intra-day lows having come just above that uptrend: 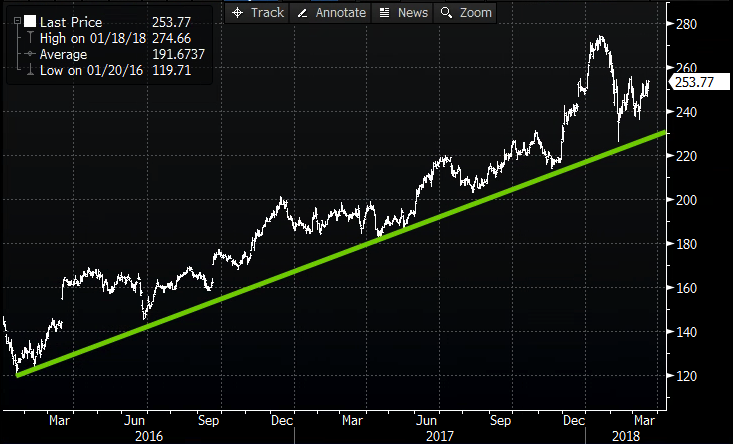 I think it is safe to say that the uptrend, near $225ish, down about 10% should serve as strong technical support, while the prior highs made in January near $275 should serve as healthy near-term resistance.

Sentiment towards the stock is generally very bullish with 25 Wall Street analysts rate the stock a Buy, with only 4 hold ratings and 1 Sell.

FDX’s ytd stock performance is in line with the S&P 500’s 1.7% ytd gains but dramatically out-performing its main peer UPS, which is down 9% on the year, and down 20% from its 52-week and all-time highs made in late January. These two stock’s had been tracking very closely to one another until UPS reported a decent holiday quarter on February 1st but featured guidance that disappointed, the result of higher expenses which result in lower operating margins: 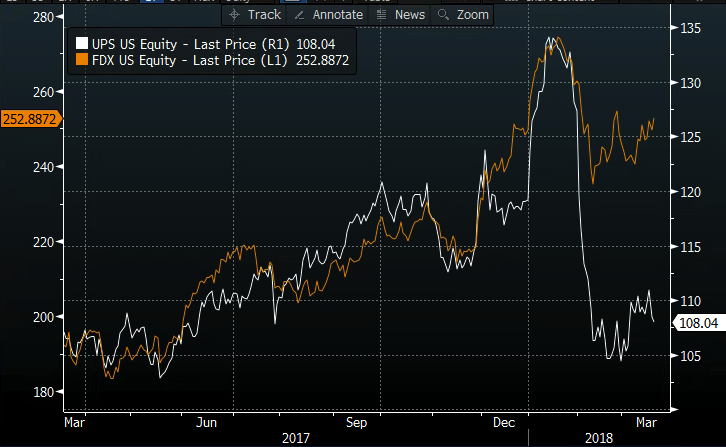 FDX is a cheap stock, trading 15x next year’s expected eps growth of mid-teens %, yet the discount to the market seems to be the result of what could quickly turn into an Amazon headwind as the company builds out their own package delivery options, which will likely result in an arms race between the two once viewed to have a very symbiotic relationships.

Short-dated options prices in FDX remain elevated, aside from the February spike, above the one year range, making premium sales for longs in the stock attractive into the print:

So what’s the trade? I have no real directional inclination, and the some of the issues that hit UPS’s guidance in Feb, and thus the stock are not exactly translatable to FDX. So I’ll lay out a couple ways to play.

this trade does best if the stock were to rise in line with the implied move of about $9 to $260 on Friday’s close. If the stock is 260 or lower the short calls will expire worthless and then you own the May 260 calls for $4.70. At this point you could take profits as the calls would have gain in price due to deltas, or if you thought the stock could rally further then sell a higher strike call to further reduce the premium at risk.

Rationale: This trade risks 2% with a break-even down 2% with possible gains of 6% if the stock is headed back towards its two-year uptrend in the next month.