Nike (NKE) will report their fiscal Q3 results Thursday after the close. The options market is implying about a 5.5% one day move Friday which is essentially inline with the average over the last four quarters.

The stock is down today on a disappointing announcement regarding the executive thought to be the heir apparent to the CEO, per the WSJ:

The company said Trevor Edwards, Nike brand president and a potential successor to Chief Executive Mark Parker, will leave his position immediately and retire from the company in August.

In an internal memo to staff announcing the departure, Mr. Parker disclosed that the company in recent weeks had received reports of “behavior occurring within our organization that do not reflect our core values of inclusivity, respect and empowerment.”

Clearly, a blow to CEO Parker’s succession plans, today’s announcement was also coupled with the statement that Parker plans to stay on beyond 2020, helping to soften the blow.

Looking at the report there is little reason to believe that there was some sort of dramatic turnaround on a sequential basis for the issues that have hurt margins in the last couple quarters, and the catalyst for the stock appears to be in the back half of the year.

Shares of NKE are up nearly 6% on the year, and up 30% from its 52-week lows made in October. The stock might be sitting on important technical support at the intersection of the January broke out that lead to new all-time highs, and the uptrend from the Oct lows: 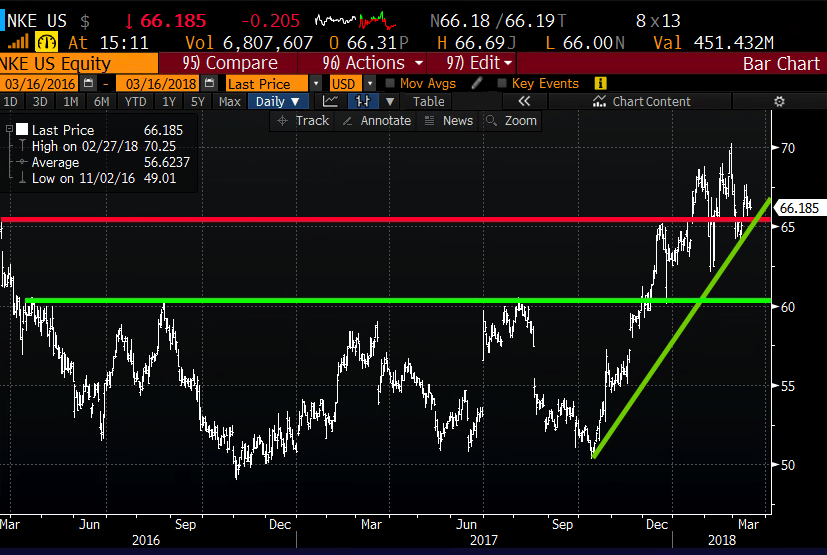 To my eye, a break below $65 and this stock could be on its way to the next big level of support at $60.

So what’s the trade? A beat and raise and stock on its way back to prior highs, near $70. But the stock’s gains since the fall could discount a bit of good news.

For those who think a guide lower would cause the stock to break below $65 and retest $60 in the coming weeks, defined risk strategies make sense: