Tiffany & Co (TIF) will report their fiscal Q4 results tomorrow before the open. The options market is implying about a 5% move in either direction or about $5. The average one-day post-earnings move over the last four quarters has been about 4.25%.

Shares of TIF are down about 2% on the year, and down about 8.5% from its 52-week and all-time highs made in late January. The one year chart below remains fairly constructive, with the recent consolidation holding the uptrend that has been in place, while the late December breakout near $98 should serve as healthy technical support: 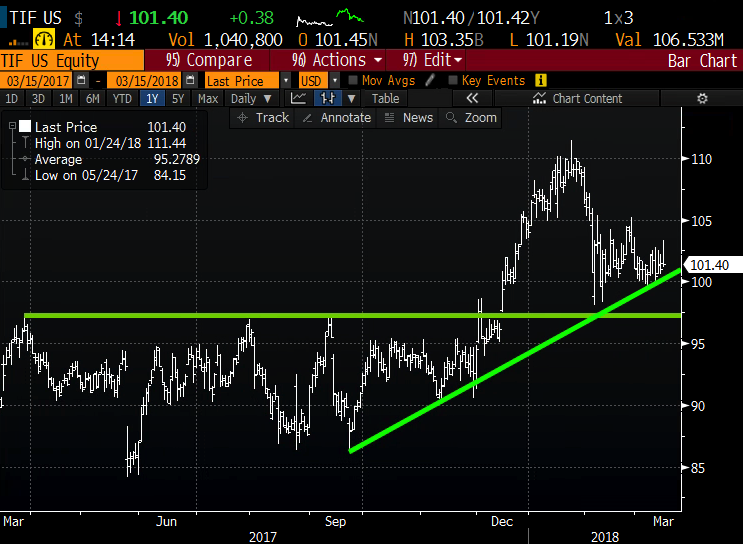 Backing the chart out a bit and the rejection at the recent highs makes a fairly massive double top, but also highlights how important near-term support is in the mid to high $90s as a break below would put the stock below the steep uptrend that has been in place since mid-2016: 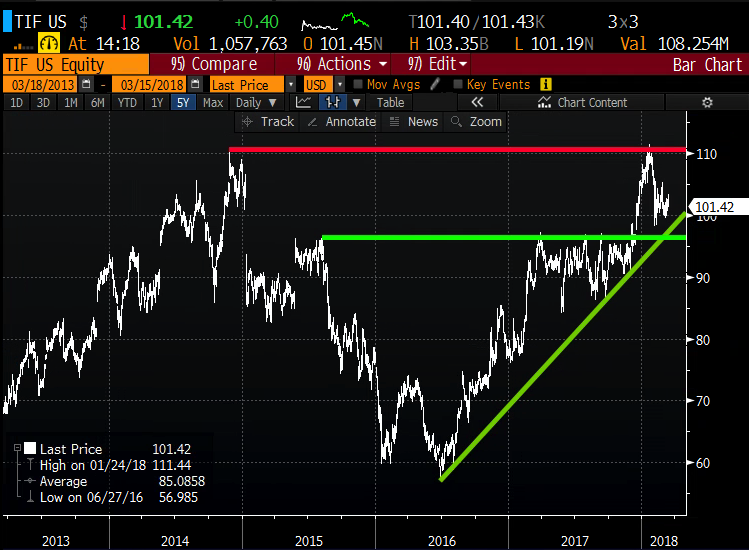 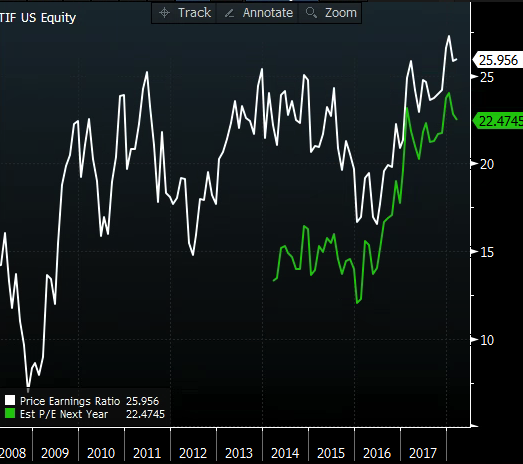 Wall Street analysts are fairly mixed ion the stock with 16 Buy ratings, 13 Holds and No Sells, with an average 12-month price target of about $111, back near the prior highs.

If the company were to miss and guide lower the stock would likely be down in line with the implied move of about 5%. But here is the thing, options prices are not cheap for those looking to play on a directional basis. For instance targeting $95 near term, with the stock at $101.50 the April 100 / 95 put spread is 1.70, or about one-third of the width of the spread and doesn’t break-even until the stock is 98.70, down about 3%, allowing for profits of about 3.6% of the current stock price.  Not a fantastic risk-reward.

So how about a put fly?

On the flip side, if I were inclined to play for a move back to the prior highs just above $110, I might consider the April 100 / 110 call spread for 3.50 vs 101.50. This call spread is already 1.50 in the money, breaks-even up 2% and the in the money nature of the spread should mitigate the expected vol crush post results. Obviously, a call butterfly would work here, but the $5 wide strikes make it a tad difficult unless you are going to use weeklies.

And the problem with weeklies, regular readers will know recognize this disclaimer for long premium directional trades into events, you need to get a lot of things right to just break-even. First and foremost direction, then timing and magnitude of the move.

Here is a great example of interesting technicals, with little conviction on fundamentals, and not trading on our part…