Adobe Systems (ADBE) will report their fiscal Q1 results tomorrow after the close. The options market is implying about a $10.00 move in either direction or about 5%, which is rich to its 3% average one-day post-earnings move over the last four quarters, but in-line with its ten-year average.

Shares of ADBE are up an astounding 25% so far on the year, this coming after 75% gains in 2017. To look at the stock chart, specifically the parabolic move since the start of 2017 (which coincided with a $50 billion market cap increase) one would think the company found a cure for cancer: 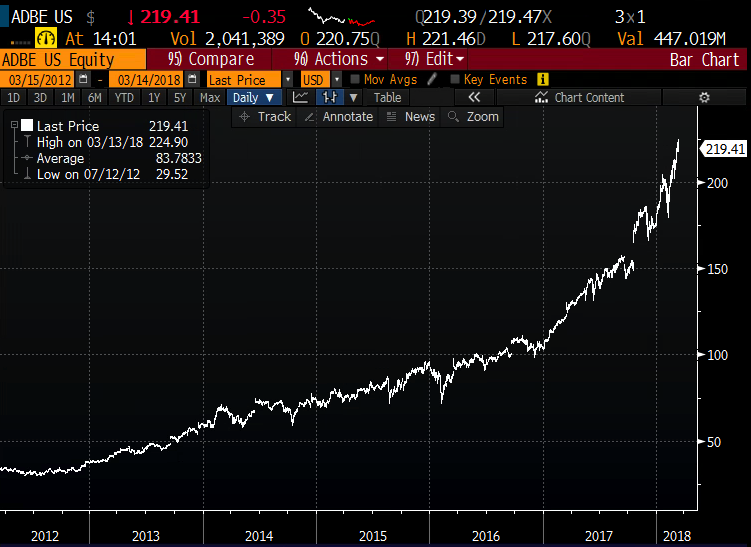 With the stock having just made new all-time highs yesterday, there is obviously no overhead technical resistance, but to my eye, on a near-term basis, there are a couple levels that might serve as support. $200ish, the mid-Feb breakout level to new highs, and the level the stock bounced from on March 2nd is the first. And then, of course, the intersection of the uptrend from its October gap to new highs and the Feb 9th intraday lows at $180: 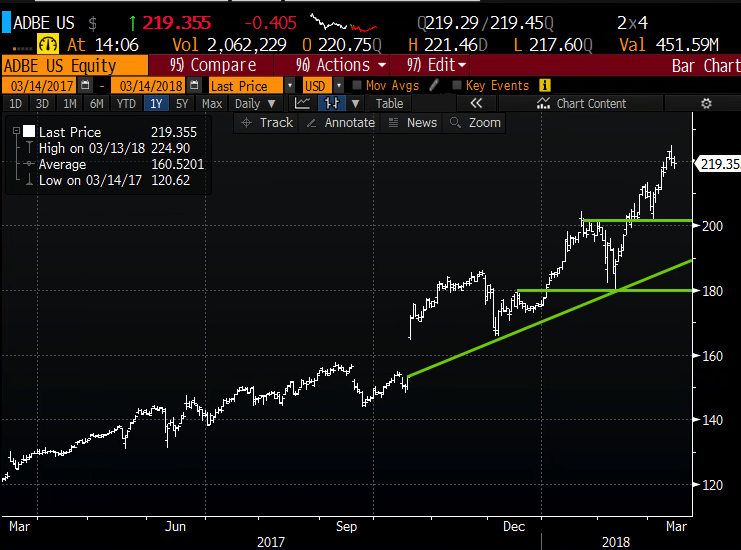 These levels might help inform downside strikes for options trades.

In lock-step with the stock’s out-performance, Wall Street sentiment is running hot, with 24 Buy ratings, 10 Holds and No Sells, with short interest about 1% of the stock’s float. One of those Buy ratings.

So what’s the trade? If you wanted to play from the long side, I suspect defined risk strategies are the way to go, but the weeklies are tough… for instance with the stock at $219, the March 16th 220 / 230 call spread is offered at $3.80. This spread would target the implied move to the upside, but costs nearly 40% of the width of the spread. Not an attractive risk-reward. It might make sense to sell downside puts at one of the levels highlighted above as support, at levels you would buy the stock, to help finance the purchase of upside calls or calls spreads. But with the stock up on such a spike, this also seems like a poor risk-reward, so it becomes a matter of conviction. But as usual, I’ll offer our normal disclaimer for long premium directional trades into events, you need to get a lot of things right to just break-even, first and foremost direction, the magnitude of the stock move and of course timing.

If I were long the stock, looking to hold onto the position but looking to slap on some near-term protection into the print for the little cost I might consider a collar.. for instance:

Profits of stock up to 230 (less 50 cents premium paid), stock called away at 230 but can always buy back short call prior to expiration to keep long intact.

Losses of stock down to 210, but protected below.

Rationale: this trade basically locks in the potential for 10.50 in losses vs 9.50 in gains, but does so for little premium outlay. So the trade-off is giving up some potential upside for potential downside protection below 210. Longs would only do this if, they wanted to stay long, but more worried about a gap lower than higher.

I guess the last point I would make is that the stock is at the top end of a fairly epic range, and has rallied more than 20% from lows a little more than a month ago. While it is unlikely he company would issue a miss and a meaningful guide lower, if they did, the stock would be heading straight through 210 on the downside, likely in the weeks to come on its way back to the Feb lows.