Prior to Target’s (TGT) fiscal Q4 results last week I highlighted some analyst commentary that I read in Barron’s that I thought was important to understand investor expectations after the stock’s 50% rally off of its 52-week lows made last summer:

So when the company reported last week, they slightly missed the already lowered guidance and guided down for the current quarter and full year, per WSJ:

By no means a disaster, but its important to note that the company had very easy year over year comparisons, and as previously stated, very high expectations given the stock’s gains from its lows and ytd outperformance. The day of results on March 6th, TGT closed down 4.6% as investors digested the company’s plan to Accelerate Multiyear Strategy, aka speed up spending on such things as digital, free two-day shipping, same day delivery of in-store purchases, remodel 300 stores, open stores in rural areas, expand private label offerings and raise their minimum wage for workers. Near term this accelerated spending will depress profitability but I suspect this comes out of a position of strength rather than weakness. In the quarter just reported, TGT’s online sales grew 29% year over year, faster for the first time than peer Walmart’s 23% yoy gains.

When Walmart (WMT) disappointed on their fq4 results on Feb 20th for similar reasons to TGT, the stock declined 10% the next day, and is now down 20% from its all-time highs made in late January, and has yet to find support, and is down 10% on the year vs TGT up 16% on the year: 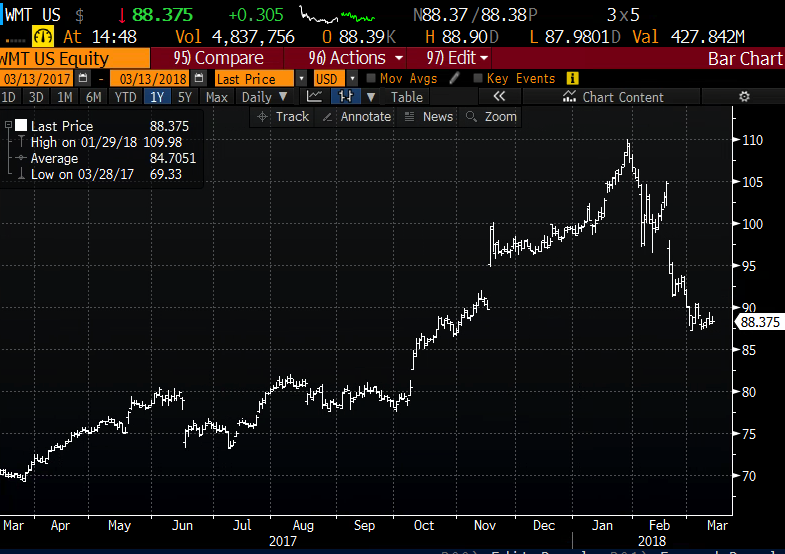 Put it all together, and you have a cheap stock that on a relative basis acts well to the market and its major peer despite two consecutive guides lower. If the company is able to show the fruits of greater spending on their Q1 call in May, then we very well could be on the cusp of a big rotation out of WMT and into TGT.

Shares of TGT are still well below its all-time highs made just above $85 in 2015, which seems like a reasonable target on evidence of an effective turnaround plan in the coming months. 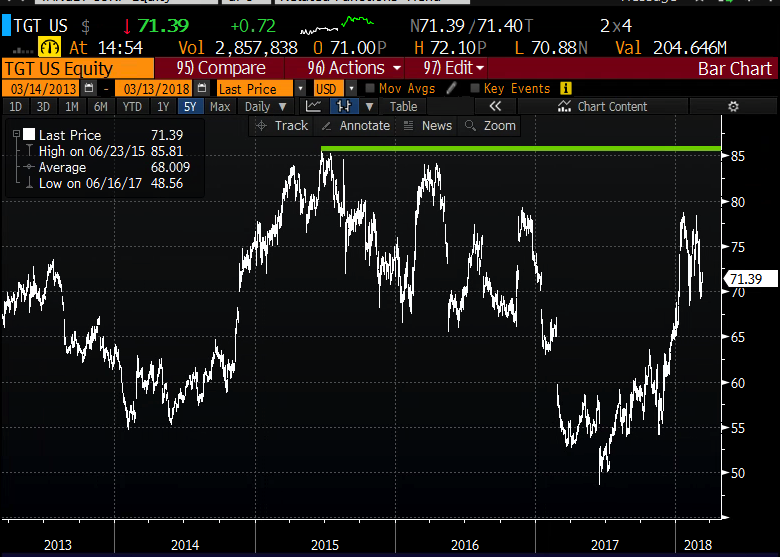 So what’s the trade? Finance longer dated calls by selling shorter-dated ones to finance.

If the stock is 75 or lower the April 75 call you are short will expire worthless and you will own the July 72.50 call for $3. at which point you could sell a higher strike call in the same expiration and turn into a vertical call spread and further reduce the premium at risk.

The idea here is to own a long-dated near the money call, but finance by selling shorter-dated premium, playing for a move higher towards 75. but not much higher.