Dicks Sporting Goods (DKS) will report their fiscal Q1 earnings tomorrow before the open, the options market is implying about a 10.5% move in either direction, which is just shy of the average one-day post-earnings move of about 12%. As an FYI, the stock has declined the day following the last six quarterly reports, with declines ranging from 2.8% to 23%.

DKS is not a name I look at too frequently, but the companies recent change to their gun sales policy has them in the news. The last time I looked at the stock was prior to their fiscal Q1 results last May and had the following to say, when the stock was $48:

Shares of DKS are down nearly 10% on the year, and down about 23% from their 52-week highs made in November. The stock got creamed on Friday, down 8% shortly after the opening, but spending most of the day rallying from those levels to close on the high of the session but still down 4%. The cause of the gap was a computational error on an impairment charge. If they can hey their act together on the accounting front the stock screens as pretty cheap with current estimates calling for 19% eps growth on 11% sales growth in the current fiscal year, the stock trading at about 12% that expected eps growth.

Despite the stock having just declined 27% from its all-time highs made in late 2016, we detailed a bearish trade structure that could be used as a hedge or a defined risk way to play for lower lows:

This stock is not faring well lately and risk to the downside is still considerable. For those long the stock or looking to press its weakness on an outright basis a put spread makes sense

DKS May earnings gap was followed by further declines all summer that resulted in a massive 23% gap on following their Q2 earnings in August. The stock has since recovered, filling in much of that gap, but still down more than 50% from its all-time highs made in late 2016, having just been rejected at technical resistance: 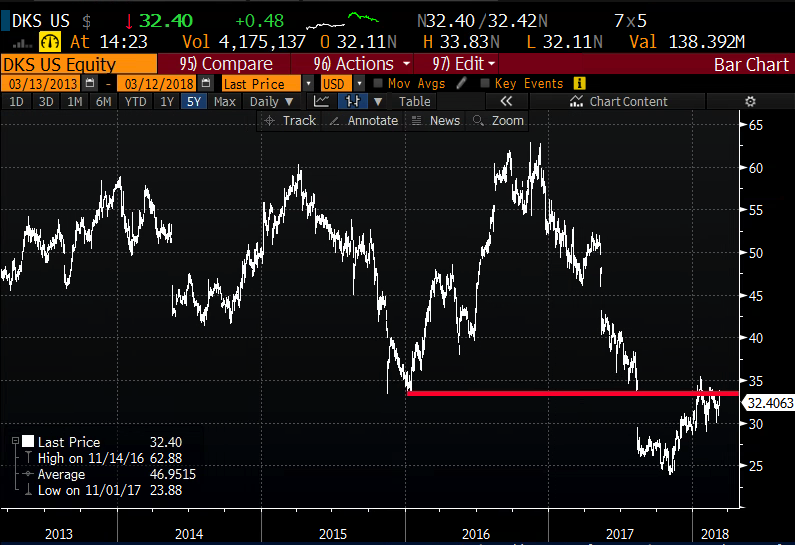 Earlier today I noticed that Suspequenhana, widely known for their expertise in options trading offered the following trade suggestion into tomorrow’s print, per Bloomberg:

I guess my only comment on the trade idea, without having any real directional inclination of my own is that the fundamental analyst might see the stock as a “compelling buying opportunity”, but the spread between implied volatility (blue line below, the price of options) and realized volatility (white line below, how much the stock has been moving) is fairly wide making short dated long premium directional trades challenged.

IN this case with the stock about 32.50, the March 32.50 calls (this Friday expiration) are offered at 1.65, or about 5%, or about half of the implied move. When compared to the average over the last year, this seems reasonable, but its important to remember that you need to get a lot of things right to merely break-even on this trade, first and foremost direction, then obviously the magnitude of the move in the timing allotted.

So what’s the trade? Let’s play two… for longs

Bullish: Given the high levels of implied vol, existing longs might consider overlays to add potential leverage in the event of a sharp move higher in line with the implied move of about 11%.

Profits of stock up to 36, up 10.7% from current levels, but also receive $2 in gains from the overlay. The stock would be called away if it closes above 36, but the effective call-away level would be at 38, up 17%. You could always cover one of the short calls to keep the long position intact.

Losses of the stock from current levels, but the 1×2 was done for zero cost and will expire worthless.

Rationale: you would only do this if you wanted to remain long the stock into the print and thought there was a good chance the stock would be up in line with the implied move following the results.

Or for longs looking to keep position intact but protect against another earnings gap, consider:

Profits of stock up to 35, stock called away at 35 but can always buy back short call prior to expiration to keep long intact.

Losses of stock down to 30, but protected below.

Rationale: this trade basically locks in the potential for 2.50 in losses vs 2.50 in gains, but does so for no premium outlay. So the trade-off is giving up some potential upside for potential downside protection below 30. Longs would only do this if, they wanted to stay long, but more worried about a gap lower than higher.