Shares of Blackberry (BB) are up 2.5% on news that they are flexing their patent troll muscles, per Recode:

Blackberry spent the early 2000s defending against patent trolls, but seemingly in its twilight years, after all but abandoning the smartphone market it once dominated, is inclined to take a crack at mining for patent infringement dollars:

the company seems to be using its tens of thousands of patents as a kind of business model. Last year, BlackBerry sued Nokia for patent infringement, and won more than $800 million in a settlement with Qualcomm. It also sued enterprise communications company Avaya in mid-2016.

Blackberry, for the most part, is a software company now, serving a few different markets, per Forbes:

Blackberry’s Software segment is likely to be the biggest driver of its earnings going forward. The bread-and-butter Enterprise Mobility Management business continues to see growth in orders from government agencies and customers in regulated industries, and the shift towards a subscription-based model should ensure revenue stability. BlackBerry has also been betting on emerging areas such as autonomous vehicles and the Internet of Things, leveraging its QNX software platform, which could prove to be a long-term growth driver for the company. Blackberry’s smartphone operations will play a diminishing role in its revenue mix going forward following its decision to switch to a licensing model. Service Access Fee revenues will also likely trend towards zero, as customers abandon their legacy BlackBerry devices.

I suspect BB’s focus on Autonomous Driving and Connected Cars in their QNX division might serve as an entree for the entree, for a takeover. But they are going up against some well-heeled competition in Apple, Uber, Waymo, Lyft…. More on that here.

Despite BB’s minimal earnings and declining sales totals, shares of BB are up nearly 100% in the last year, and have doubled in fairly orderly fashion: 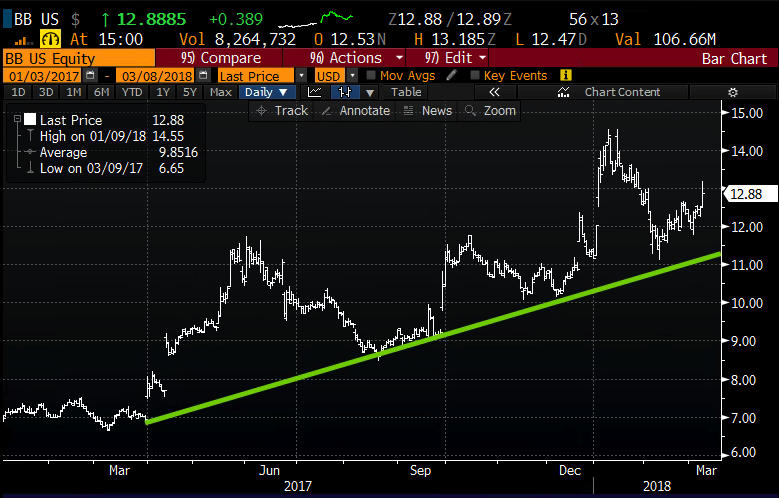 The move is also despite very poor investor sentiment, with nearly 10% short interest and Wall Street analyst community that has avoided the stock like the plague with only 4 Buy ratings, 10 Holds and 3 Sells, with an average 12-month price target of 11.44, well below where the stock is trading.

The company’s balance sheet is in great shape with $1.6 billion in net cash or nearly 25% of their market cap. Any patent wins like the one from Nokia, and we see the worst case valuations scenarios dramatically raised….

The ten-year chart of BB is fascinating, down 90% from its 2008 all-time highs, maybe slightly less astounding than the 95% decline in revenues from its 2011 all-time highs of $20 billion to last year’s $990 million. 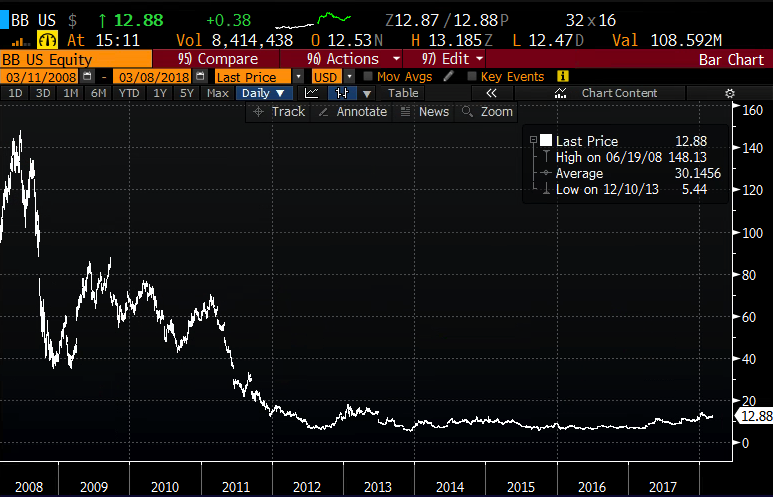 Short-dated options prices in BB highlight just how controversial the stock is, and has been for the last few years, with 30 day at the money implied volatility at 57%, quickly approaching 2-year highs.

Options volumes are running very hot today at 4.5x average daily volume with calls making up 90% of the activity, many of them being bought to open in March weekly 12.50 and 13 strikes.

So What’s the Trade? If you think there is much greater potential for a sharp move higher on some sort of settlement with Facebook, or possibly even m&a, then you might consider selling downside puts to help finance the purchase of upside calls:

Rationale – This trade has an asymmetrical reward if the stock breaks out above 15. Below 10 it is like owning the stock. The rationale for a risk reversal as opposed to buying stock is that the gyrations around this range are inconsequential to the overall thesis. A move above 15 and reward is unlimited and any move below 10 and it would be like buying stock on a dip.