Over the weekend, the cover of Barron’s had this headline – The Housing Market’s Rebound Is Far From Over, despite recent weakness in housing stocks:

Housing stocks generally have sold off this year amid concerns that rising interest rates will crimp home-buying. The SPDR S&P Homebuilders exchange-traded fund (XHB), which tracks home builders, home-improvement retailers, and industry suppliers, is down 9.3% on the year, versus a 0.15% gain for the Standard & Poor’s 500 index. Shares of the four leading publicly traded home builders—Lennar, D.R. Horton (DHI), PulteGroup (PHM), and Toll Brothers (TOL)—are down about 12%, on average, after rallying nearly 70% in 2017.

One reason for the contrarian view, valuation:

The home builders recently traded for 10 times 2018 profit estimates, compared with the broad market’s price/earnings ratio of 17, even though the companies are expected to notch double-digit earnings growth this year and next.

To be sure, some recent housing data have disappointed. The National Association of Realtors reported last month that sales of existing homes slipped 3.2% in January from the prior month, and 4.8% from a year ago. And the U.S. Census Bureau said new-home sales fell 7.8% in January, following a 7.6% drop in December.

Our pal Peter Boockvar gets a shout-out:

THE BIGGEST RISK to the housing market’s health today is interest rates, which have been creeping higher. Peter Boockvar, editor of the Boock Report, maintains that the uptick in the average 30-year mortgage rate to 4.33% in January from 4.20% a month earlier had an immediate impact on contract signings.

While other economists suggest this is a great time for the U.S. consumer:

UNDERPINNING TODAY’S STRONG housing demand is the U.S. consumer. “The consumer’s health is about as good as it gets,” Mark Zandi, chief economist at Moody’s Analytics, told Barron’s in a recent interview.

“Unemployment is low and falling, there are lots of jobs, and wage growth is picking up,” said Zandi, a longtime student of the housing market. “Interest rates are still low, household debt service is near record lows, and confidence is near record highs. The recent correction in the stock market notwithstanding, wealth has increased greatly. There are lots of tailwinds behind the American consumer and the American household.”

Shares of the XHB had a 16% peak to trough decline from their Jan highs, and apparently found a little support after round-tripping the entire move from their early October breakout: 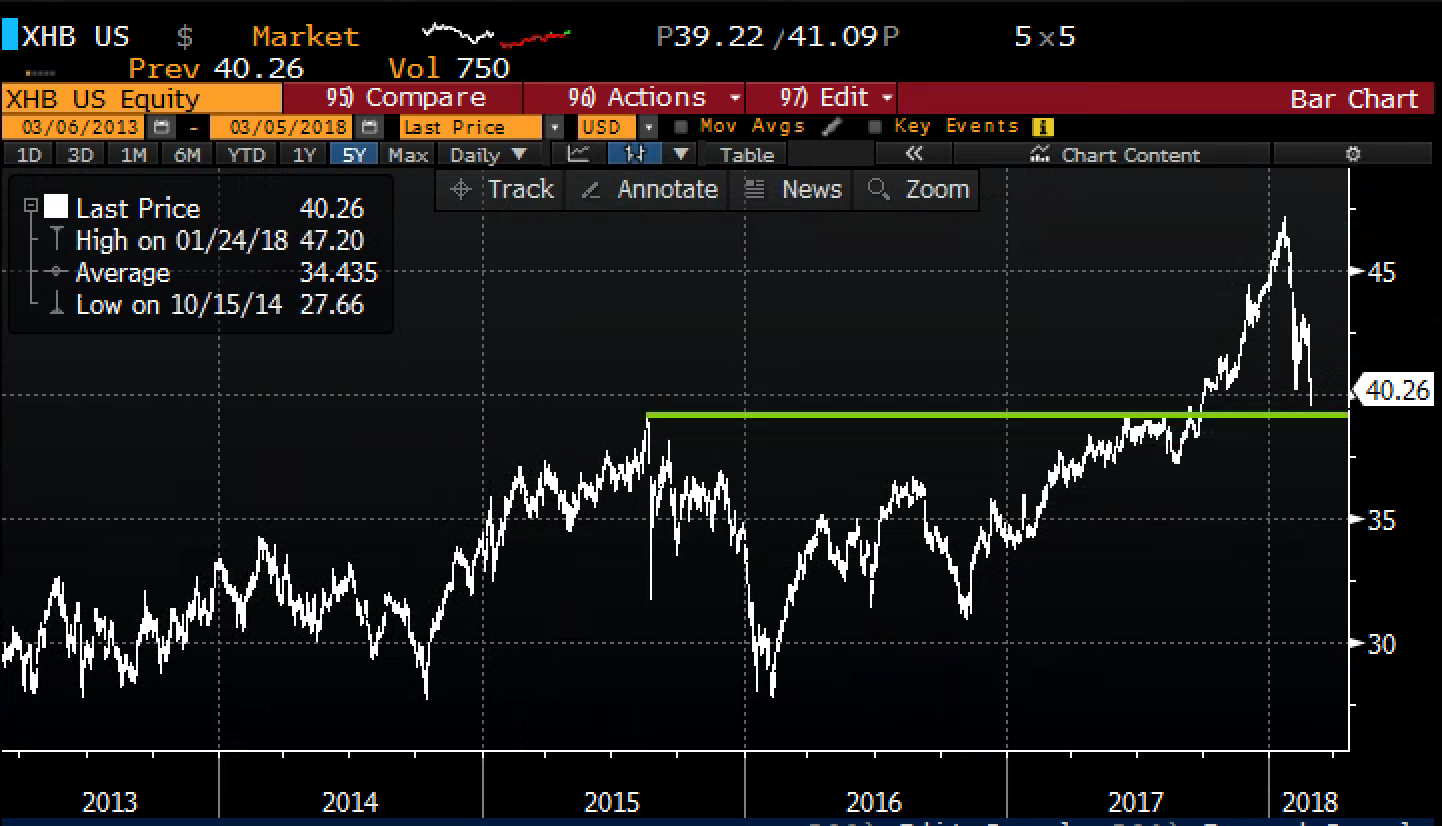 The spike in short-dated options prices in the XHB during the decline was fairly epic, and while the vol crush since has been significant, options prices remain well above the two-year average:

Today, the XHB is back above its 200 day moving average and is approaching its recent (steep) downtrend. If the etf is able to hold this bounce and erase that downtrend it could mean a move back towards the mid 40’s. But with near term vol still above its 2 year average it makes sense to use some of that to finance views out into the Summer.

But as we know, interest rates are the wild card here. So playing for a bounce makes the most sense if one defines risk.

Rationale – This trade limits risk to just 1.00 if the etf can’t hold this bounce. It has unlimited profit potential after the March 29th calls expire and could set up for a very inexpensive look for a move back to the mid 40’s into June. There is risk if the etf explodes higher this month but the trade could be managed if we see 42 (or above) in the next few weeks.