Investors have a lot to consider constructing an investment mosaic in an increasingly cloudy economic backdrop with rising interest rates, weak u.s. dollar, low employment, massive tax cuts, fear of inflation, global unwind of QE and a new one this weak, a looming trade war, with our allies.

While a strong view on some of the above might lead to a fairly convicted view on large-cap multinationals, I think it is safe to say that more domestically focused small caps might be a bit harder to figure out. The IWM the etf that tracks the Russell 2000 is actually in the exact spot it was on the day in late December when the Tax cut bill was passed, and now down about 5.5% from its recent 52 week and all-time highs made on January 18th. The last two days price action in the IWM is pretty interesting, yesterday showing very good relative strength down about a third of the SPX’s more than 1.3% decline, and today up 1.2% vs the SPX’s 20 bps decline.

Back in Sept James Paulsen of The Leuthold group had an optimistic outlook for small caps in Barron’s taking on each of the issues above:

So far in 2017, small Cap stocks have had a difficult time but several coincident indicators seem poised to turn more favorable. First, bond vigilantes will likely lead Fed tightening actions and by steepening the yield curve provide a favorable economic backdrop for small companies. Second, inflation fears should become more pronounced in the balance of this recovery and Smalls play better with fire. Third, if the U.S. dollar keeps weakening, historically it has proven most beneficial for small cap stocks. Fourth, Smalls typically do well whenever credit risk is contained, and currently, credit spreads in the bond market suggest financial health among corporations. Fifth, a return to more normal stock market volatility next year could help improve Small Cap relative returns. Finally, inflation seems poised to rise (at least modestly) and this typically has boosted small company operating results relative to larger companies.

That’s all fine and good, but I guess for the time being I want to focus on my belief is that all three major equity indices here in the U.S will re-test the recent lows, and the IWMs relative outperformance may be the very thing that helps it lead on the downside if equities were to retest the Feb 9th intra-day lows.

The five-year chart below, shows the very steady uptrend in the IWM from the 2016 Q1 double bottom, depending on how you draw the lines, it broke the trend last week, and bounced off of it today…. clear violation: 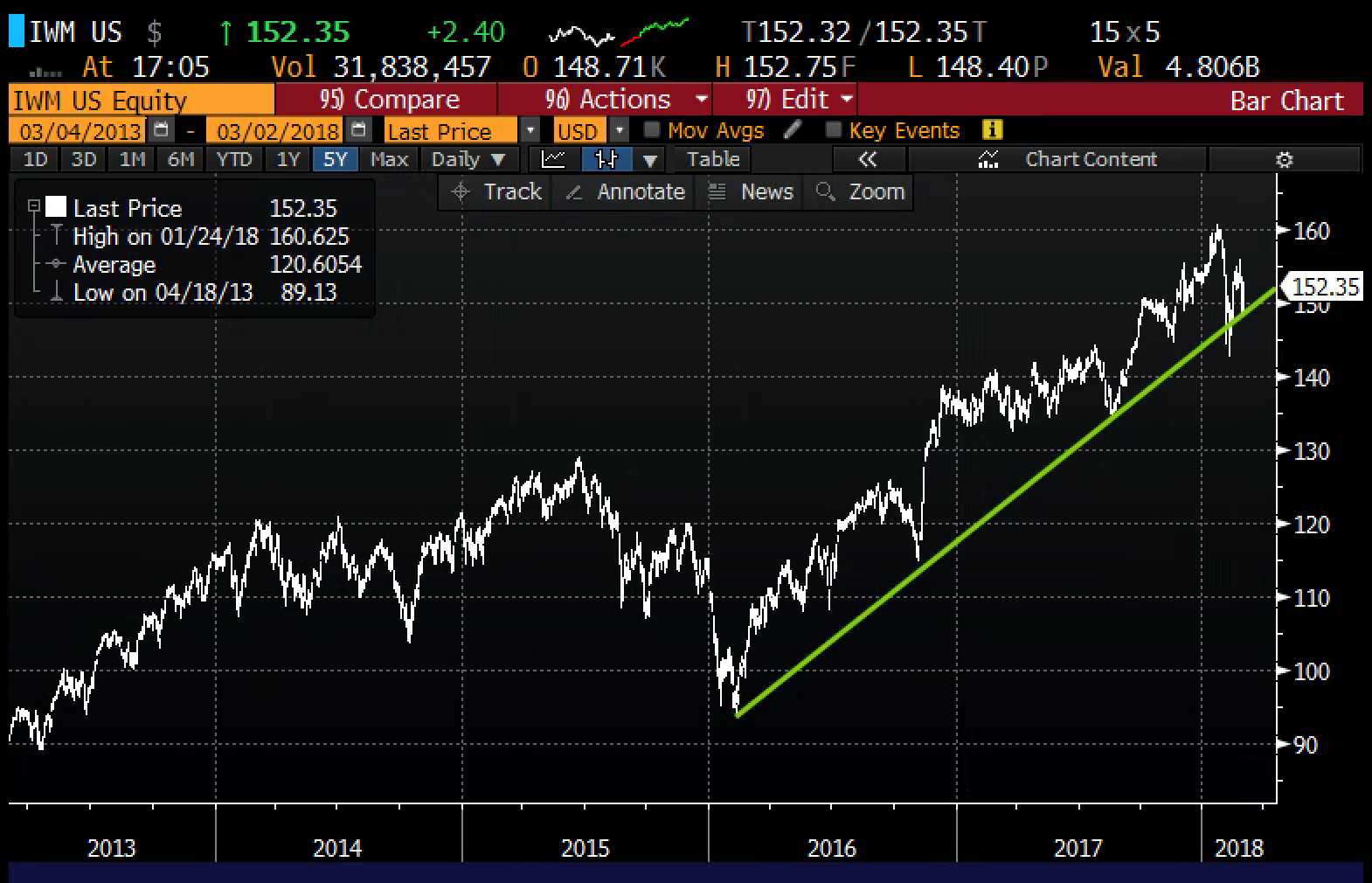 Short-dated options prices for the IWM remain elevated from their early January levels, but well below their recent highs, but realized volatility, how much the etf has been moving has remained elevated (21%), above implied vol (17%), the price of options, possibly making long premium directional trades attractive:

If you agree that the major equity averages will re-test the Feb lows in the coming weeks, the recent crowding in small caps could make the IWM vulnerable and lead on the way down.