Salesforce.com (CRM) is scheduled to report their fiscal Q4 results tonight after the close. The options market is implying about a 5% move in either direction or about $5.50, which is very rich to the 1.5% average over the last four quarters, but shy of its ten year average one-day post-earnings move of about 6.5%.

Shares of CRM today made a new 52 week and all-time high, placing the stock up nearly 15% on the year, more than doubling the year to date performance of the Nasdaq Composite and 5x that of the S&P 500.

Over the last month, that saw the major averages drop nearly 10% and recover most of the losses, we have mentioned on more than a few occasions that most prior market leaders held at key support levels on the downside, and have not had too many problems getting back to, or in the case of CRM, Amazon, Boeing and JPM made new all-time highs, prior to the broad market doing so. Looking at CRM, it bottomed intra-day on Feb 9th, the day the market bottomed, right at its uptrend that as been in place since the end of 2016: 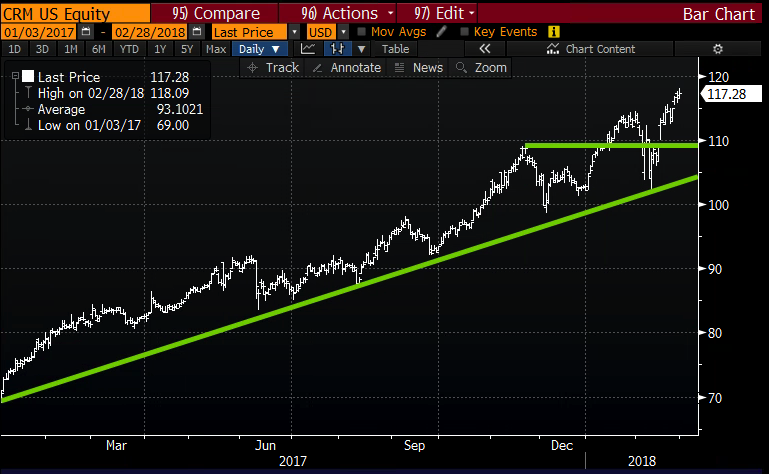 What is abundantly clear near-term is that $110, the early January breakout level to new highs, should serve as technical resistance.

CRM’s outperformance is notable given its outsized valuation. I think it is safe to say that aside from Netflix, there are not any other $80 billion-plus market cap companies that trade at such a rich earnings multiple, 88x trailing, and 70x. While investors have been focused on CRM’s 20% sales growth over the last few years to justify the valuation 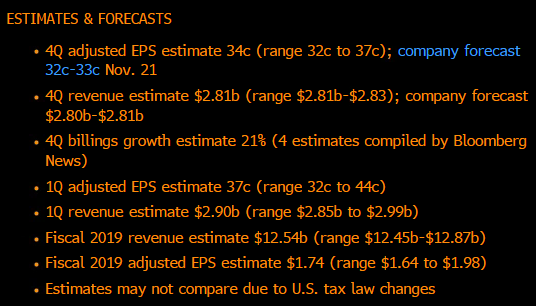 Bloomberg Intelligence preview of the results highlights the following point, emphasis mine:

Salesforce.com will have a tough time overcoming strong comparisons vs. a year earlier when it reports fiscal 4Q results on Feb 28. Strong deal activity in 3Q may also affect billings as some deals may have been pulled away from the normal 4Q seasonality, which is the company’s strongest quarter. Sales and profitability should expand as investments in cloud services mature. Marketing Cloud and Service Cloud should see momentum, with retail spending driving this growth.

Sentiment on the stock is universally bullish with 40 Buy Ratings, 3 Holds and only 1 Sell with an average 12-month price target of $126, about 7% above where the stock is trading, with short interest only 2% of the float.

So what’s the trade? If the implied move is about $5.50, then to pick a direction means you need half that to break even. For those looking to pick a direction and define risk with long premium strategies, I’ll offer or normal disclaimer into an event like earnings, you need to get a lot of things right to just break-even, direction, the magnitude of the move and timing.

Rationale: this is an ok risk-reward, risking 1.7% to possibly make 3.5%, but with defined risk in what could be a volatile post-earnings reaction/.

Or with elevated options premiums, If I were pretty convicted of a post-earnings rally at least in line with the implied movement, but willing to be put the stock at lower levels I might consider a bullish risk reversal… For instance:

Rationale: again, one would only do this trade if they were comfortable being put the stock down at 112 on Friday’s close.

Or Hedge vs 100 shares of long stock.  If you were looking to give up some potential upside for some near-term downside protection, you might consider a put spread collar…

Profits of stock between current levels and 122 (less $1 premium paid for structure), Profits capped above 122, but you could always cover the short call to keep long stock position intact.

Losses of stock between current levels and 116 (long put strike less $1 paid for structure) with protection of up to 6 between 116 and 110, no protection below but have mitiagted $6 in potential losses.