On Jan 31st we took a look at Facebook (FB) stock into its earnings event and detailed a hedge for those long the stock. At the time we discussed the changes to Facebook’s algorithm and how it had the potential to spook some investors if it showed an immediate effect on costs and ad revenue. From Jan 31st:

I suspect investors have reason to be concerned that the plan will cause costs to go up and ad revenue to go down as the company hopes to reorient its core product back towards your social network as opposed to spammy news and ads. But investors got over those concerns fairly quickly and within a week the stock filled in the entire gap and made a new all-time high.

With that thought we detailed a hedge for those long the stock:

If I were long and looking to protect against a post-earnings drop I might consider a put spread collar, allowing for some further upside while also providing some downside protection.

The stock had a decent reaction following the event itself but then quickly found itself get taken to the woodshed with the broader sell-off. It reached a low around 170, exactly the support level the hedge targeted. So good timing on the hedge even if the reasons for the selloff were somewhat separate from the event the hedge looked to capture. But those same issues remain. Facebook is at the center of a lot of criticism right now in a world of “fake news”. Whether that affects customer use is another matter, but clearly the company feels the need to adapt, and those adaptations could have a material effect. I can’t imagine the news cycle will get better for them. Instagram recently acquiesced to the Russian government and took down videos implicating bribery and possible connections to the Russia meddling in the US election. This isn’t a great look for the company right now, from CNBC: 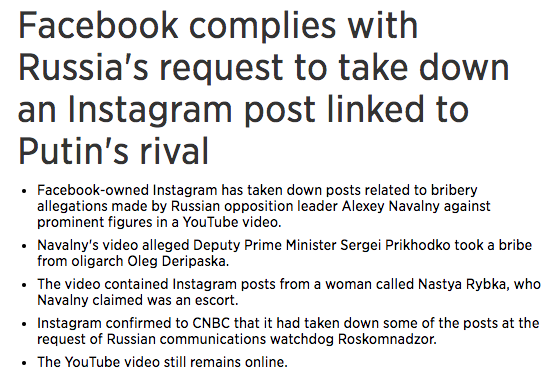 So now with the previous hedge expired and the stock higher, let’s revisit the stock because it is bumping up against possible resistance:

The key to the hedge isn’t to over commit on another decline, we want to give room for the stock to get back to previous highs, but at the same time, protect against another selloff.

So What’s the Hedge?

Rationale – This is a fairly conservative hedge, not looking for disaster, but protecting against a very realistic decline possibility over the next few months. For those looking for more protection the put spread can be widened with the put sale on the 160 or even 155 strike, but that obviously adds cost to the overall trade. If the stock continues higher towards or even beyond the previous high, there will be mark to market losses on the hedge but it will be much less than gains in the stock and the hedge can be taken off for a loss or rolled higher if that’s the case.