Pandora (P) will report their Q4 results tomorrow after the close. The options market is implying a whopping 19% move in either direction following results, about $1.05, or nearly $250 million in market capitalization. The company is expected to produce its largest annual GAAP eps loss of $2.28 for 2017, which equates to a ballooning GAAP net income decline of $542 million (up from $342 million in 2016) despite record expected sales growth of 4%, or about $1.5 billion. I don’t know the company well enough to speculate what’s going on here, but Spotify and Apple are in a massive two-horse race globally for paid streaming subscribers with Spotify at over 70 million and Apple Music at probably 35 million, Pandora is left picking up the scraps with single-digit millions and relying on their ad-supported model.

At this point Wall Street analysts and investors appear to be at loss when it comes to Pandora’s prospects. There have been numerous activists campaigns over the year with holders agitating for a sale, the problem is there have been no buyers. Pandora has had interest though in company’s like Sirius, taking a near $500 million stake in the company in mid-2017, that might offer the potential for a “Pandora 2.0”.

When the company reported Q3 results in early November the stock had a 25% gap lower, to new all time lows since its 2013 ipos, and the stock has languished below the gap level but is now 33% off its January lows:

As my friend, technician extraordinaire Carter Braxton Worth likes to say ” draw the lines any way you like, but to my eye” it like the stock is a key near-term resistance level, at the one-year downtrend, and quickly approaching the Q3 gap level.

Carter has also instructed me to look at multiple time-frames, and connect as many dots on your lines as possible. In this scenario looking at the downtrend from the all-time highs in early 2014, I see the stock now picking up its head a tad above that epic downtrend:

Despite the recent rally, sentiment remains horrible, with 10 buy ratings, 19 holds and 1 sell with short interest at 24%. The way I see this report, a miss and a guide lower and the stock is headed back towards last months lows. An unexpected beat with some sort of updated growth plan, then the stock fills in the November gap in the coming days.

Options market makers clearly expect movement with 30 day at the money implied volatility at 106% at multi-year highs (the price of options), more than double realized vol at 49% (how much the stock has been moving), a massive and generally unheard of spread: 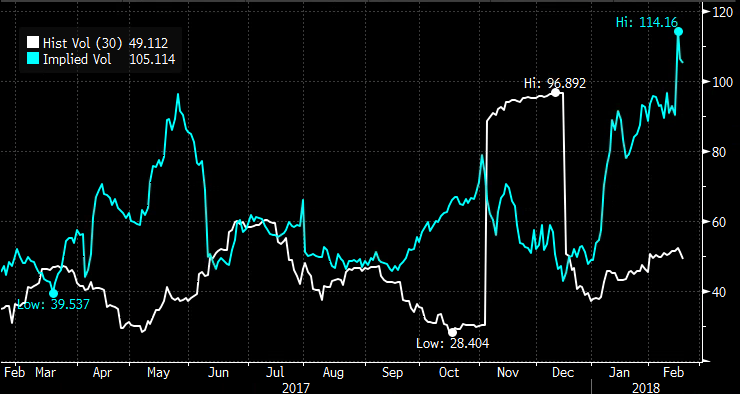 So let me tell you what I would do if I were these guys. I would pull the ol’ dotcom trick. I would go out and make an acquisition like Spotify recently did in the Blockchain space, per Techcrunch:

Spotify has acquired the Brooklyn-based blockchain startup Mediachain Labs, whose team will join the company’s office in New York where they will work on developing better technology for connecting artists and other rights holders with the tracks hosted on Spotify’s service. Prior to its acquisition, the startup had developed several technologies that could aid in these efforts, including a decentralized, peer-to-peer database to connect applications with media and the information about it, as well as an attribution engine for creators, and a cryptocurrency that rewards creators for their work.

In short, the startup was working to leverage blockchain technology in order to help solve problems with attribution.

This is an area where Spotify can use some help, as it turns out. Last year, Spotify settled a licensing dispute with the National Music Publishers Association (NMPA) in the U.S. over unpaid royalties.

It sounds kind of pikey, but if they were to take a real stab at utilizing the blockchain for digital rights management, the stock might start to be considered a “blockchain stock” causing a massive short squeeze. Business Insider had a great post back in 2016 Blockchain’s promise to content creators that’s worth a read if this idea resonates with you.

If I were inclined to play for a short squeeze, considering the recent bounce, and the high levels of implied volatility I might consider selling downside put at support and using proceeds to buy calls or call spreads.

Mark to market: this trade will gain in value as the stock moves closer or above the long 6 call strike and lose value as it moves closer to the short 4 put strike. If the stock did not move at all, all three options would lose value post-earnings, with the 6 call losing most as expected vol crush would have the highest monetary impact on the near the money call.

As for bearish trades, man this is hard, with defined risk. The trade above I chose to sell a downside put to help finance calls. With short interest and sentiment where it is, it would be nuts to sell calls naked to finance put spreads.