On November 16th, the day Walmart (WMT) issued a Q3 beat and raise to forward guidance the stock gapped up to then new all-time highs, closing up nearly 11%. The stock quickly consolidated those gains and based in the high $90s for two months until the stock rose 10%, seemingly in a straight line for no particular reason aside from broad market euphoria. Since nearly kissing $110 intraday on January 29th, the stock’s decline has tracked that of the Dow Jones of which it is component, down about 11%.

WMT’S next identifiable catalyst will be their fQ4 results due Feb 20th. For those that think the company is likely to repeat their Q3 success and show similar trends in grocery sales, which helped the company post their strongest sales store sales increase in nearly a decade in Q3, while also benefitting from online growth, then there are a couple important things to consider on how to structure a bullish trade in this new volatility regime we seem to be in over the last couple weeks. First, Mind the Gap. The stock’s opening tick on Nov 16th was very $95 a level it has not sniffed since then. What’s clear is that there is an air-pocket between $95 and $90, and then no real support until the mid $80s: 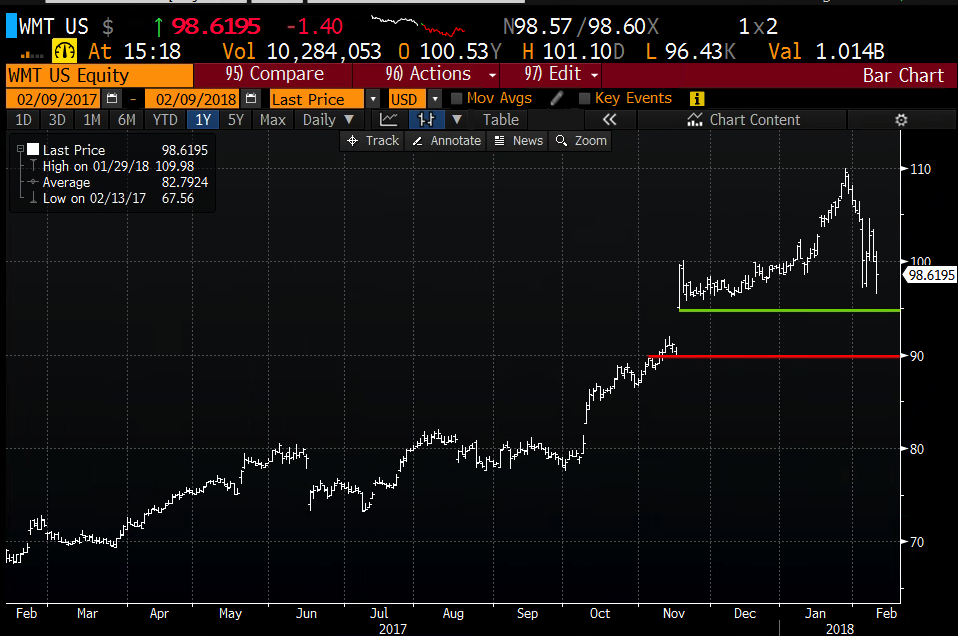 This set up lends itself to defined risk strategies, if you get the direction wrong for fundamental reasons in a market like this, the reaction is likely to be magnified.

Also, you hear a lot about the fear index, but how does that translate into single stock options? Here is a good example. WMT, generally a low vol name, meaning its single stock options are usually priced far cheaper than a $300 billion market cap tech stock, has seen options premiums rise quite steadily: 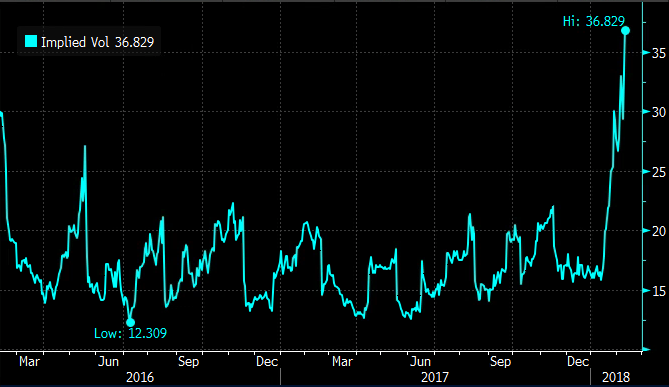 What this chart of 30 day at the money implied volatility shows is that short-dated options prices, are nearly 2x as expensive as they normally are headed into earnings, making long premium defined risk strategies like long calls or call spreads a tough way to make money, even if you get the direction right.

Which leads me to short premium strategies. In this situation, if I were inclined to play for a bounce in WMT over the next few weeks, or merely a gradual creep or consolidation, I might consider selling a put spread that encompasses that Nov gap. For instance:

Rationale – This is risking more to make less, but with a high probability of success. If the stock and the market were to find its footing the premium on this sale would collapse and it could be taken off for a nice quick profit. If the market goes lower there is room down to 97.50 on March expiration where you still make 1.50, and it doesn’t become a loser on expiration until the breakeven point at 96.