SNAP’s 40% plus one-day gains following its better than expected Q4 results was nothing short of astounding. The stock was down at one point 10% this morning in a sloppy tape, but also a day that shares of Twitter (TWTR) are up 16% following its own better than expected Q4 results. Possibly investors taking profits in SNAP and chasing TWTR? Who knows as both companies have a combined market cap of about $47 billion (about $23.5 billion apiece) which is a pimple on FANG’s ass (so to speak). But it is noteworthy that these two stocks have caught a massive bid as it appears that investors are taking profits in the aforementioned FANG.

In our SNAP preview I highlighted just how poor investor sentiment was in the story:

While there was no shortage of skeptics on the stock at the time of its IPO, the company whiffing on its first quarter out of the gate back in May certainly minted SNAP a “show-me” story from there on out. Wall Street analysts are pretty much on one side of the boat on this one, with only 5 Buy ratings, 18 Holds and 11 Sells with an average 12-month price target of $12.27, well below where the stock is trading.

As for the price action I suggested:

The stock is mightly trying to put in a bottom, as the November earnings gap was a little higher than the August, with November being higher than August. One reason for those earnings gaps marking near-term lows might be the sell-off into the prints, but also the high short interest in the stock at about 21% of the float, which has been constant throughout the past year. When the stock sells off into a known event, and the immediate reaction is lower, shorts are inclined to cover, helping to put in a bottom.

And while I was not positioned my view into the print:

Its the last part I want to focus on for this post, “technical resistance at $17”. $17 was the ipo price and for some reason, once the stock went below it last summer, it was unable to get back above it, until yesterday. You know the old saying, past resistance becomes support. What’s really interesting to me is that the stock opened yesterday at tad above $17, the exact level it gapped down from on July 11th, 2017 and rejected at in October and nearly again in December: 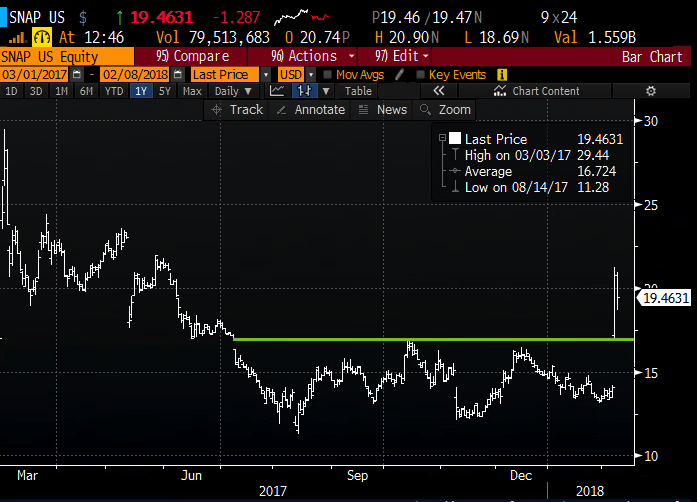 In the current market environment, I fully expect the stock to consolidate some of yesterday’s gains, but the longer the consolidation the greater the potential for another explosion higher if the company is able to string together two better than expected quarters.

We detailed two trades in our preview, one a risk reversal in April that caught the move perfectly:

That trade is now worth about 3.65 vs the initial .20 cost. Those 12 puts can be closed at .13 and the 16 calls either closed or spread to reduce risk (For instance the April 25 calls can be sold at .57, which would leave 9 wide call spread on for a credit) or the entire trade can be closed and rolled to higher strikes like the April 20/25 call spread.

The second trade idea, a call butterfly) is profitable but was not set up for this type of move and its max gain level at 17 was too conservative. That will benefit if there’s any pullback below 19 and can be taken off then for a small profit.

As one might expect, short-dated options prices were elevated into the print, but have remained so after given the massive spike in realized volatility, which might present an opportunity for those interested in making a directional bet and using premium sales to help finance:

So what’s the trade if you are long-biased like me, but think the stock might consolidate and you want to finance long premium directional view with some sort of premium sale?

Rationale – This takes away all premium risk as the put sale pays for the call spread, it has risk like stock below 17 but that is the new support level. If the stock were to get back above 20 this would behave like stock with up to $5 in profit potential.