One of the biggest stories coming out of yesterday’s sell-off was the spike in implied volatility, with the VIX rising from about 17 at about 10am to nearly 40 by 3pm. That spike was obviously reflective of the sudden drop in stocks in the afternoon, with the DJIA suddenly dropping 1000 points and making an already bad day seem potentially crashy. But for those in the options and vol world, there was more going on than met the eye, an esoteric factor having to do with vol ETN’s that many (like me) have been wondering and others warning about for the past few years. We didn’t find out exactly what was going on until after the closing bell. Have a look at XIV (Short vol, short-term ETN) after hours: 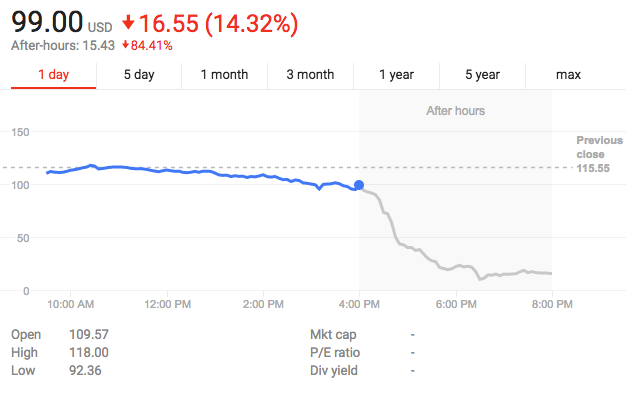 XIV was down 14% during the day, then 85% after hours. Today, Credit Suisse announced that they will liquidate XIV, I assume at pennies on the dollar.

To explain what just happened, let’s recap how these vol ETNs work using VXX (long vol) and XIV (short vol) as examples. Because you cannot trade the VIX itself these ETNs use rolling VIX futures. In the case of VXX that means the fund owns a bunch of VIX futures over the next two months. Each day it has to sell futures in the upcoming expiration and buy futures in the second expiration. In the case of XIV, it’s the opposite, buying back a portion of the front month and selling the second. In each case, the ETN keeps a balance of futures creating a constant window out into the future.

That roll is interesting in and of itself involving contango, backwardation etc. The XIV (and others like SVXY) gain a little each day when the VIX is low and the futures of the VIX curve are in contango (when the front month futures are lower than the next month) and each day the roll makes a small percentage, like arbitrage. Traders going long XIV (and shorting VXX) has turned into a really crowded trade the past few years, and it’s worked great up until this point.

The important factor to remember in this case is that XIV is short VIX futures yet can be “owned” as a long ETN. What that quirk means in layman’s terms is that it can be worth less than zero and the issuer (in this case CS) needs a mechanism to liquidate the fund if the sudden risk of being worth less than zero ever kicks in. It did yesterday as the futures essentially doubled, and the roll that XIV needs to do (buying back near-term futures they bought a month ago, at more than double the price they were sold) was enough to mean the fund is worthless.

Another easy way to think about this (but more as a metaphor) is that owning XIV is like being short a 2 dollar call on the VIX each month. You can collect that 2 dollars each month, but if the VIX futures doubled in one day, all those “gains” are gone. And if the VIX tripled you actually lose more than you had collected. It’s undefined risk, but since it’s long as an ETN it can only go to zero. And that’s essentially what happened in XIV. Credit Suisse has a mechanism to protect from actually having XIV be worth less than zero, they shut it down if it loses 80% of its value in one day. And that is what happened yesterday after the close. (note: I’m not actually sure what would have happened if the VIX futures had gone up 4 fold, I think CS would be out a ton of money if it went beyond their hedges).

A couple of interesting aspects of this story. The first is that a long-term hold of XIV was always picking up pennies from a train track in some respect. But it became that exponentially the longer the VIX stayed low. And that’s another quirk about this whole thing. Think of it this way, if the VIX was trading 20, and a big market selloff occurred, the VIX may spike to 40 and the futures one month out may spike from 20 to 30. That’s a big move and the XIV would certainly get hit on a day like that, but it wouldn’t get wiped out, maybe it would be down 25-40%. Now think of the conditions that we’ve had recently, with a VIX all Summer and Fall near 10, and VIX futures in the low teens. And let’s say you got a one day spike in the VIX from 10 to 30 (10 points lower in the VIX than the above example) and the VIX futures go from 13 to 26. In this case the XIV would be forced to liquidate. Even with a VIX lower by 25% than in the first example.

That’s what’s pretty astounding about what happened. XIV could have survived a VIX spike from 50 to 100 better than it could one from 10 to 30. And with the conditions that we’ve seen with a low VIX for so long (meaning futures also got really low and the curve flattened) XIV shutting down because of a one day spike in vol became almost mathematically guaranteed.

A lot of people probably lost a lot of money on this thing, and I feel terrible about that. I’ve been writing about these things for years and hopefully made the point about their risks. I’ve thought they were WMDs for retail investors since the beginning and always questioned why they were even available. Here’s the first time I wrote about the Vol ETN’s, back in 2011:

And for those that rode the wave in XIV as a long-term holding? Here’s the mistake they made, another metaphor. Imagine collecting premium from a vol sale every day for a year but keeping it all on the table each time, compounding. It’s all at risk and can evaporate at any moment. In fact it’s nearly guaranteed. However, you could make a lot of money over time if you simply kept the initial premium risked on the table, and cashed out on the money you collected every week. If you don’t do that (any many didn’t), and you left it all on the table, building up over time, you only need one day for it all to go bad, and lose everything you’d made.

It’s unclear how many people got hurt in this trade. People have been warning about this potential event for some time. Here was Vance Harwood’s warning about it this October: Possible XIV termination events.

And like I said, short vol is a very crowded, and not just in the XIV. And others like Stuart Barton have been warning about the potential knock-off effects when it all had to unwind. I tried to explain Stuart’s argument here last June. (Peter Tchir also wrote about this in Forbes this past Summer). And that is likely part of this selloff. No one really knows how crowded this trade is and what happens when it all comes undone.