Snap Inc. (SNAP) will report their Q4 results after the close. The options market is implying about a $2, or 14% move in either direction tomorrow. The company has released three quarterly reports since their March 2017 ipo, and the stock has declined significantly the day after each one (-21.45, -14% & -14.62% respectively, circled below).

Since breaking below its $17 ipo price in July 2017, the stock has spent the entire time trading below that level with a couple bounces near $12: 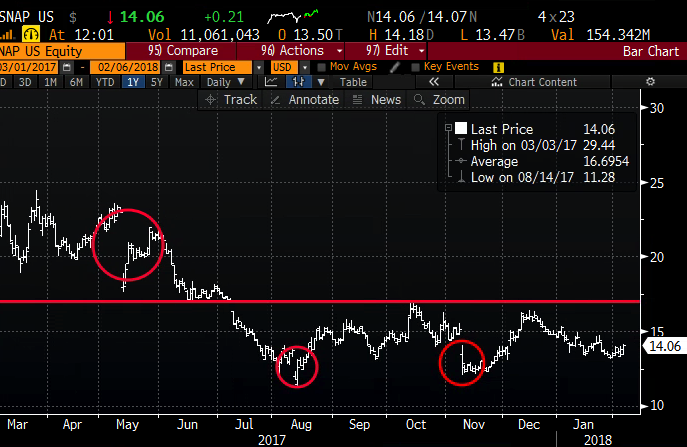 While there was no shortage of skeptics on the stock at the time of its IPO, the company whiffing on its first quarter out of the gate back in May certainly minted SNAP a “show-me” story from there on out. Wall Street analysts are pretty much on one side of the boat on this one, with only 5 Buy ratings, 18 Holds and 11 Sells with an average 12-month price target of $12.27, well below where the stock is trading.

One of those Hold ratings is star internet analyst Mark Mahaney from RBC who highlights the following inter-quarter data points and items to watch for in the quarter in a research note last week: 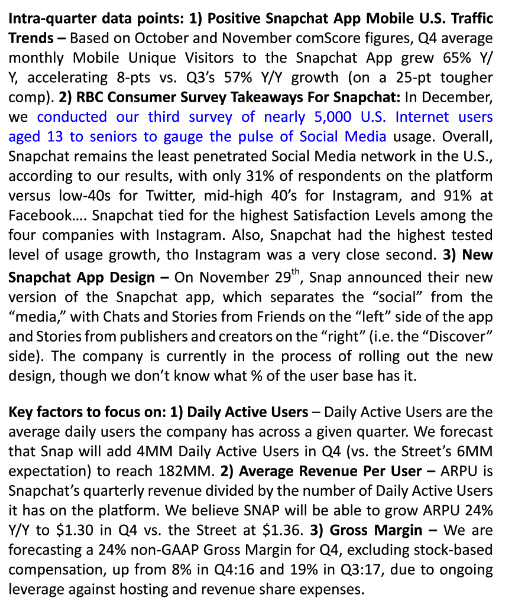 I’d guess that qualitatively the most important takeaway from this report will be the company’s commentary on the App redesign rollout. In the meantime did advertisers take their feet off the pedal leading to a revenue miss and lower arpu?

The stock is mightly trying to put in a bottom, as the November earnings gap was a little higher than the August, with November being higher than August. One reason for those earnings gaps marking near-term lows might be the sell-off into the prints, but also the high short interest in the stock at about 21% of the float, which has been constant throughout the past year. When the stock sells off into a known event, and the immediate reaction is lower, shorts are inclined to cover, helping to put in a bottom.

I suspect there is at least one more bad quarter prior to the full rollout of the app re-design where advertisers might be reignited to try out the platform, while positive reviews could cause faster user growth.

First, let’s talk about a stock alternative/replacement, potentially capturing a relief rally on the event and a move higher over the next few months, but allowing for some room to the downside in case we see another gap lower on the event itself.

Rationale – A risk reversal acts like a horseshoes and hand grenades trade. It allows to be wrong by a couple of dollars in this case on entry, giving a buffer of 2 dollars lower in the stock where you only lose .20, but if the stock were to shake off the shorts and the bad sentiment and go higher it has unlimited potential to make money above 16. It’s a good set-up when the risk/reward may be asymmetrical, with bas news probably sending the stock to the low teens over the next month but good news potentially allowing for a move back towards 20 or higher.

Second, low premium, defined risk way to play for a bounce back to ip price between now and March expiration:

Rationale – This is an inexpensive way to get some money back in a stock you may have losses in, or simply want to add leverage on a move higher.