Facebook will report their Q4 results tonight after the close. The options market is implying about an $11 one day move tomorrow, or about 6% in either direction, which is fairly rich to the average of about 2% over the last four quarters, but in line with the average since its 2012 IPO.

Shares of FB are trading within 1% of its all-time high, now up 6.5% on the year in a month where the stock has experienced a little volatility. Up 6% in the first 100 days of January, only to give up those gains resulting from investor concerns regarding the moves the company will take to change their news feed as outlined by CEO Mark Zuckerberg in a Facebook post on January 11th. I suspect investors have reason to be concerned that the plan will cause costs to go up and ad revenue to go down as the company hopes to reorient its core product back towards your social network as opposed to spammy news and ads. But investors got over those concerns fairly quickly and within a week the stock filled in the entire gap and made a new all-time high.

What’s clear from the one year chart is that the stock is in a very well defined uptrend with decent support down about 10% at $170: 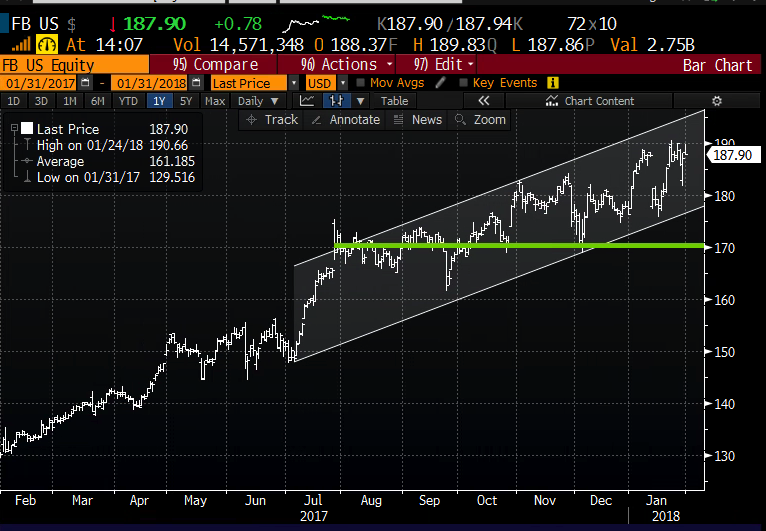 Taking a look at the five-year chart there is a fairly obvious downside target near $150, the intersection of the long-term uptrend and the mid-2017 consolidation, oh and there is no upside resistance: 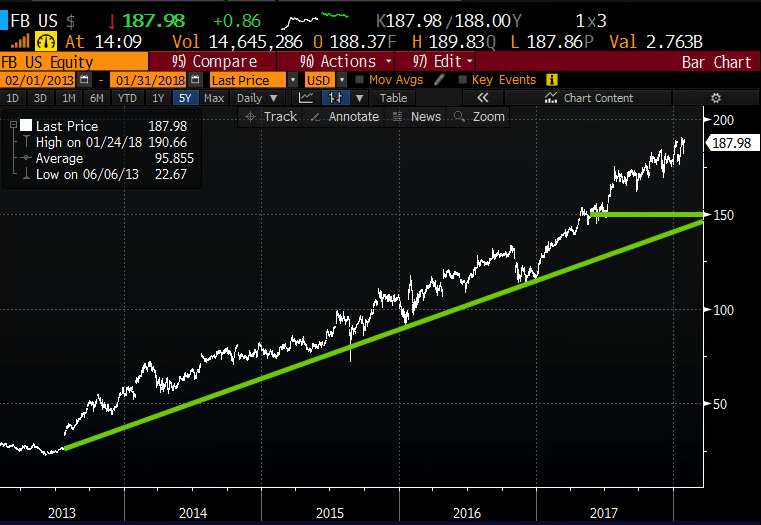 The investment world is convinced that the stock is cheap relative to expected growth, trading 27x expected 2018 eps growth of 18% on 34% expected sales growth.

A material guide down given the company’s plans and the stock could easily be on its way back to near-term support in the $170s.

If I were long and looking to protect against a post-earnings drop I might consider a put spread collar, allowing for some further upside while also providing some downside protection.