Advanced Micro Devices (AMD) will report their Q4 results after the close. Last night on CNBC’s Fast Money I detailed how we arrive at the implied movement post results, click below to watch: 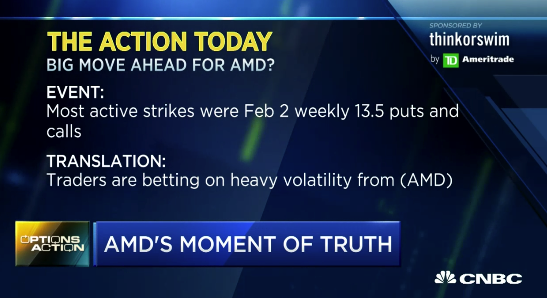 So with the stock at $12.95, the Feb 2nd weekly (this Friday expiration) at the money straddle (the Feb2nd 13 call + the Feb2nd 13 put) are offered at a combined premium of $1.35, if you bought that, and thus the implied movement between now and Friday’s close you would need a rally in the stock to $14.35, or a decline below $11.65 to make break-even, about 10% in either direction. That is the implied movement following earnings. AMD has been extremely volatile the day after earnings over the last couple years with the eight qtr one-day post earnings avg move about 17%.

The activity I described appeared to be one or more traders betting on a move greater than the implied move into earnings, buying the weekly at the money straddle where it looks like 10,000 of each the 13.5 call and put were bought to open simultaneously. Below we will break down why that is a hard way to earn a living.

Shares of AMD are up 26% on the year, while that sounds like a feat, but a lot of that move is making up for lost ground, as the stock was a dog in 2017, closing down on the year, and down 30% from its 52 week highs. That was in a year where the semiconductor group measured by the etf SMH massively outperformed broader tech, up about 40% on the year.

With the stock at $13, it is essentially at the midpoint of the one year range and kind of in a no-mans land: 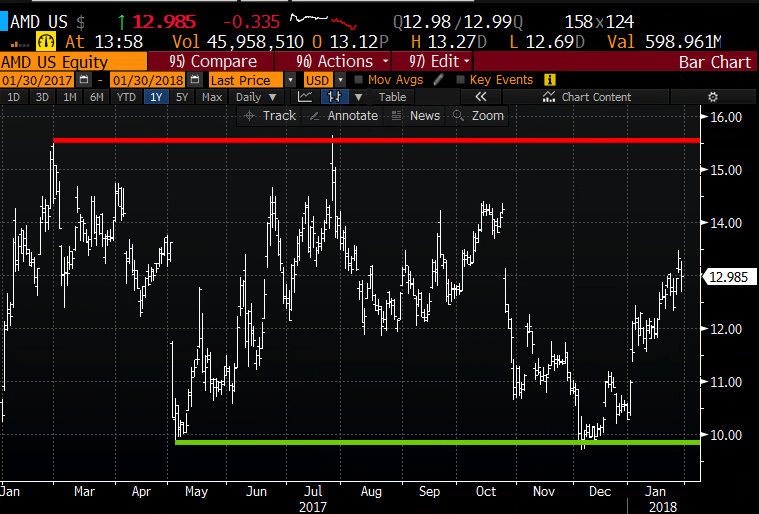 Your guess is as good as mine, a beat and raise, and maybe the stock is back near $15, a  miss and guides down and the stock is most certainly on its way back towards $11. While past performance is no indication of future results, I think it is safe to say the implied earnings volatility is reflective of investors lack of confidence in the company’s ability to forecast their own business or accurately reflect their visibility to investors. While it might be easy to suggest that the stock could easily move 10% in either direction tomorrow, buying the at the money weekly straddle has a high probability of losing a little money and only a low probability of making a lot.

Because the straddle expires Friday the risk/reward of those breakeven points is the best way to assess this trade. Paying 1.35 for the 13 straddle means a breakeven on the upside of $14.35, and $11.65 on a move lower. We can use the closest strikes to those breakeven points to get a sense of probability of breakeven as priced by the options market. The 14.50 calls have a 20% delta, and the 11.50 puts have are about 18%. Those are the odds in either direction of even getting the money back from the straddle. But clearly it could happen, so let’s look at the profit potential. In order for this to be a big winner (a double or more) the stock would need to go 2.70 in either direction. That puts the stock at 15.70 on the upside, and 10.30 on the downside, those points are pretty close to to the highs and lows of the past year’s range. The delta of the 15.70 call is 10% and the delta of the 10.50 put is about 6%. Those are the odds of a move where this straddle becomes a double.

Like we said, a tough way to make a living. But it’s certainly possible and those looking for a big move are clearly looking for the stock to test either side of that one year range. A move beyond that and it’s a huge winner. But the options market tells us the likelihood beforehand.