You know the ol’ Wall Street saying, that stocks usually take the escalator up, and the elevator down. The market’s been on a largely stress-free escalator for a long time. But as we get into the meat of Q4 earnings season, will we see that elevator down in companies that miss expectations? To suggest that expectations are high for individual companies to meet is an understatement. First and foremost the broad market strength has created a situation where rising tides have been lifting nearly all boats for weeks now. Additionally, one of the reasons for the markets big month so far has been the recognition that the corporate tax cuts enacted last month will have U.S. companies guiding earnings much higher in this year, possibly giving a cushion to valuations that were getting a tad stretched beforehand. Lastly, there appears to the sort of universal optimism in markets that I have not seen in a very long time. Whether that becomes a contrarian indicator at some point soon remains to be seen.

Last week on CNBC’s Fast Money I highlighted what appeared to me to be irrational exuberance in Texas Instruments (TXN), when a research analyst raised his 12-month price target, and the stock seemingly went to that target, up 8%, in a matter of days. This is obviously not the analyst’s fault, this is investor enthusiasm, it’s important to remember that it was a 12-month target by the analyst, not 12 days. Today shares of TXN are down 9%, nearly $11, giving back all of the prior 10 trading day’s gains after failing to put up a beat and raise on last night’s Q4 earnings report: 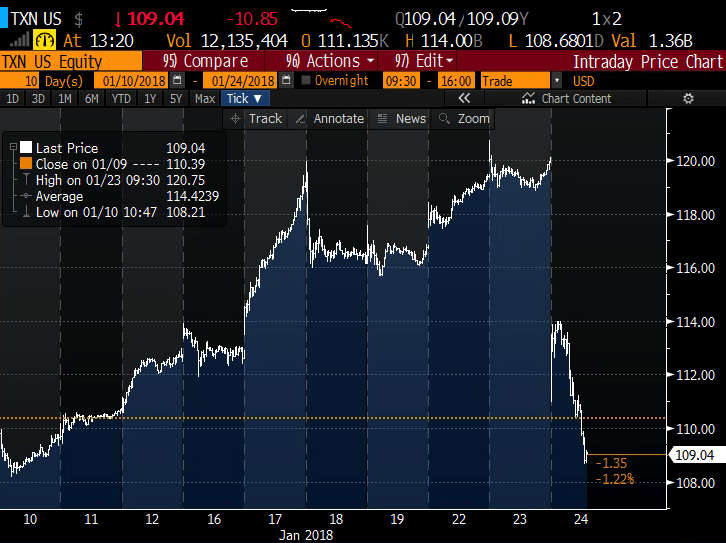 Obvious technical support is at $105 and then $100, which would mark a cool 20% correction (or is it a crash at those levels) from yesterday’s all-time highs.

While Netflix’s (NFLX) 10% gains yesterday following Monday night’s massive subscriber beat was impressive, placing the stock up 33% on the year already, NFLX might be a very special case, as it has been for years.

For stocks like Amazon and Alphabet to perform similarly to NFLX is a much greater challenge as they are 6x and 8x (respectively) of NFLX’s $110 billion market cap. My fear is that AMZN and GOOGL are up massively on the year, 15% and 11% respectively and that expectations are too high. Could TXN’s reaction to high expectations after near-term parabolic gains have a sort of snowball effect in the coming weeks? Possibly, and the risk is that investors can’t even remember what a little correction feels like as we are now approaching 400 days without a 5% peak to trough sell-off, the longest streak since 1928! per FT.com: 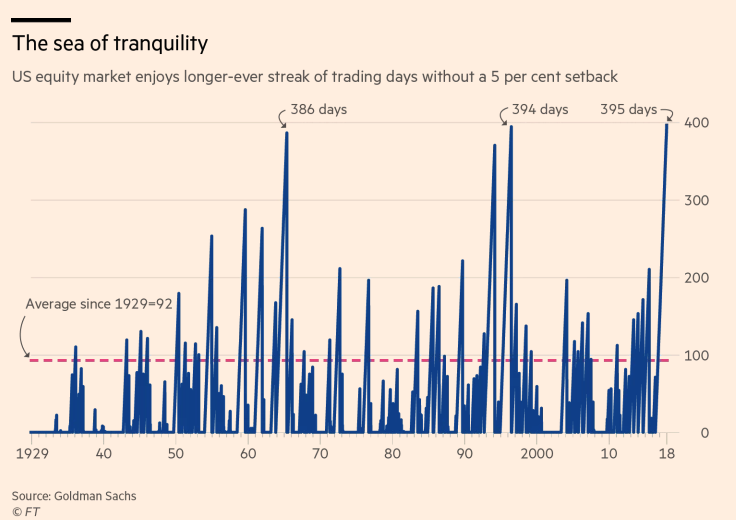 On January 11th (Overbought Is As Overbought Does) I took a look at the “Overboughtness” of the S&P 500, but concluded that it might be too early to play for a reversal:

Your guess is as good as mine as to what is likely to start the first real sell-off in over a year, but I suspect it will be a confluence of events that might start in February… concern over global monetary tightening as Janet Yellen exits as Fed Chair and without some sort of exogenous event, it will probably take some sort of high profile earnings disappointment from a company like AAPL that has the potential to filter through other parts of tech. At this point I am sitting on my hands, hoping bitcoin goes back up ?

But we will revisit this in the coming days for those looking for portfolio hedges.

At this point, with Apple (AAPL), GOOGL, AMZN, Facebook (FB), GOOGL and Microsoft (MSFT) all to report in the next couple weeks that the best bang for your hedging buck might come in the QQQ, the etf that tracks the Nasdaq 100, as they five stocks make up 44% of the weight of the etf. Assuming that all five of these stocks don’t cancel the others out (if some are up and some down post results) coupled with high expectations after a period of unusually strong returns (both in the broad market and individually) then it we were to finally get a 5% sell-off, the the QQQ is probably the best trading vehicle to realize that decline.

Rationale – This risks a little more than 1% to make up to 5% on a pullback. As a portfolio hedge, it’s a way to protect some gains without having to commit a ton of capital in case the market steams higher.