Interestingly, it appears that an improving economy causing rising rates and higher commodity prices could be weighing on profitability:

The company also sees Ford Credit lending arm earnings decreasing this year due to higher interest rates. Prices of metals, such as steel and aluminum, are hitting the company particularly hard.

This announcement came days after the company announced at the Detroit Auto Show that they are doubling their prior commitment on spending on electrified vehicles to $11 billion between now and 2022. Despite Ford’s reliance on Trucks and SUVs, the company’s increased commitment to electric vehicles is the result of their desire to better compete in places like China and Europe.

And its not just this tectonic shift towards electric vehicles, the company reiterated their intent on building an autonomous vehicle business, per Bloomberg… “including a purpose-built vehicle, the self-driving technology and the operational infrastructure in parallel, which will allow it to scale quickly as it enters production in 2021”.

Ford has been active making partnerships and investments to spur these goals:

Back in September, Ford announced that they are partnering with Lyft on autonomous vehicles, per the Verge:

Analysts remain fairly downbeat on the stock, with only 4 Buy ratings, 20 Holds and 2 sells, with an average 12-month price target of $12.65. One of those sells, Morgan Stanley’s Adam Jonas had a surprisingly mixed response to guide down, per Barron’s:

Sentiment in the stock is obviously very poor, despite it’s 5% dividend yield and new focus on autonomous and electric vehicles. I suspect these themes will be some of the most powerful in the investment landscape in 2018 and investors may be too bearish on Ford as they look to continue to expand partnerships and investments.

But the stock trades horribly, since making a new 52 week high on Tuesday, it has reversed 11.5%, quickly approaching 6-month technical support just below $12: 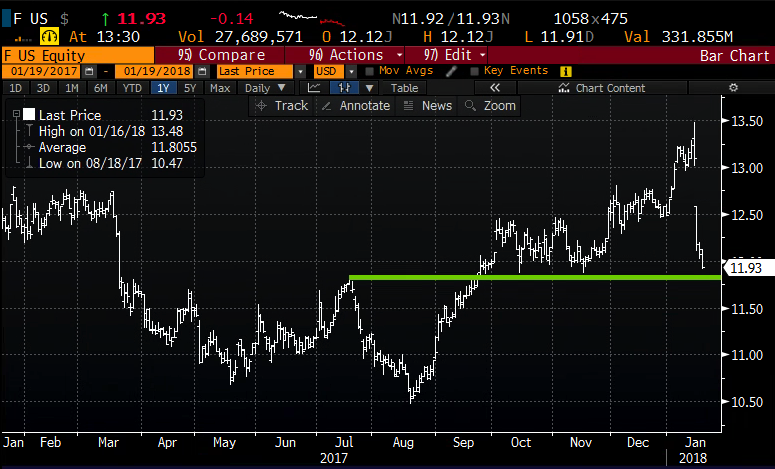 And a break of this support dramatically increases the likelihood of a re-test of the multiyear downtrend near $11 and then it has to hold the 2015 / 2017 double bottom near $10.45: 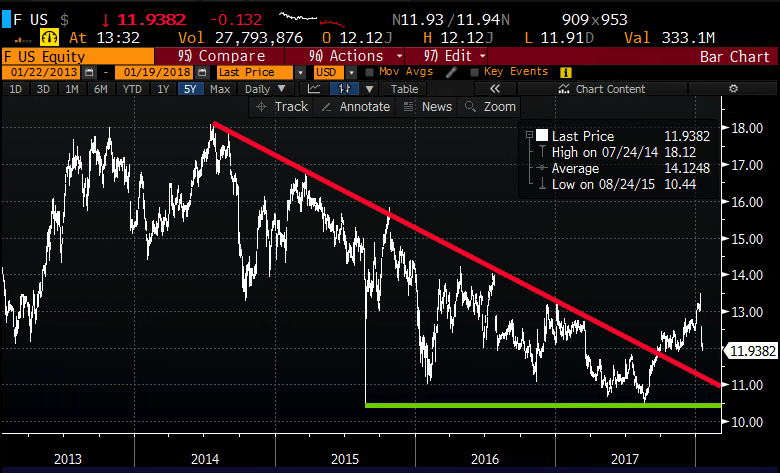 The company is scheduled to report Q4 earnings on Jan 24th after the close, the options market is only implying only about a 2% one day move as the stock has already had a fairly dramatic decline following the guidance pre-announcement. If you thought that the bad news is in the stock near term, and that investors start looking for cheap ways to play autonomous and electric investment themes, and that Ford might be included in that calculus, then short dated near the money calls look dollar cheap. I am inclined to just buy the stock here, understanding that my near-term risk is down about 10%, but the following trade idea might make sense for those looking to define their risk over the next couple of months while playing for a bounce:

Rationale – risk is defined to just .30 with a breakeven of 12.30 below the break down level on the most recent news. This is an inexpensive way to position for a bounce while defining risk if the stock continues to disappoint. If the stock were to get back above the breakeven level spreading this trade and reducing risk would make sense at that point.