I am here to tell you from recent experience that despite very low levels of implied volatility, it has still been very painful of late to be long cheap as dirt puts in the hope of catching a sell-off in single stocks or index or sector etfs. Stock markets globally got off to a rip-roaring start in 2018 after an unprecedented period of shallow peak to trough declines in 2017 that resulted in a record level of new highs in a calendar year.

The S&P 500 is up 4.5% and the Nasdaq up 5.2% (as I write). That could be a problem as we head into the end of the week where the U.S. government could face a shutdown if Rs and Ds can’t find a compromise on DACA and other immigration-related issues, and probably most importantly for single stocks as we get into the meat of Q4 earnings season next week. It appears that investors are not pricing in much for the potential market volatility that might accompany an unexpected shutdown, with the main assumption being that it’s simply another dip to be bought, and the shutdown will be resolved. But as we saw with Facebook’s 4% decline this past Friday on news about the company changing their news feeds, investors may be signaling that they’re quick to take profits on highflying stocks after epic runs in 2017, with stocks like Amazon, Apple, Alphabet, Facebook and Netflix gaining between 30 and 50% a each!

While FAANG got a lot of attention last year, BAT… FAANG’s Chinese rivals; Baidu, Alibaba and Tencent were also crushing it with Alibaba’s (BABA) 2017 gains just shy of 100%. Since gapping above $160 to a new all-time high in mid-August, the stock made a series of higher highs and higher lows before topping out in late November and suddenly dropping 14% to multi-month lows in early December before finding its footing: 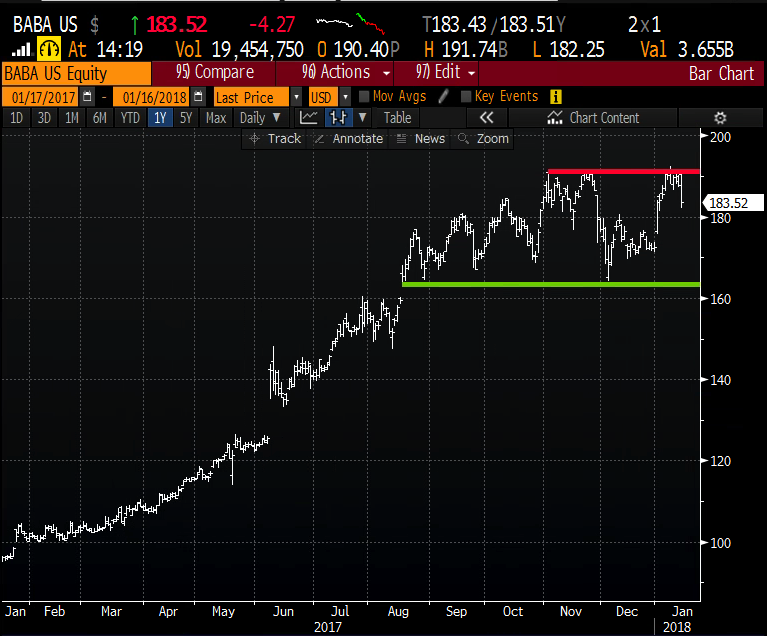 Prior to today’s 2.3% decline, shares of BABA were up 9% on the year, having made brief new all-time high last week. The chart above shows pretty clear technical resistance just above $190, the third time since November being rejected there, and pretty clear technical support near $165, the August gap level and the early December lows. Heading into the company’s Q4 print on Feb 1st long holders might consider protection into the print, or what they feel could be a rocky period in the market, looking to mitigate possibly 6% of downside risk to technical support.

Again, long premium directional bets to the downside have been an easy way to lose money for the past year, but tactical hedges in stock’s like BABA that have had outsized returns and been fairly volatile along the way make sense, despite short-dated options prices rising. One reason for this is the actual volatility in the stock. For instance, BABA’s 30 day at the money implied volatility (the price of options, blue line below) at 36% seems high for a company with a $470 billion market cap, but the stock has been moving around a bit, with its 30 day at the money realized volatility at 30% (white line below), fairly narrow gap into earnings: 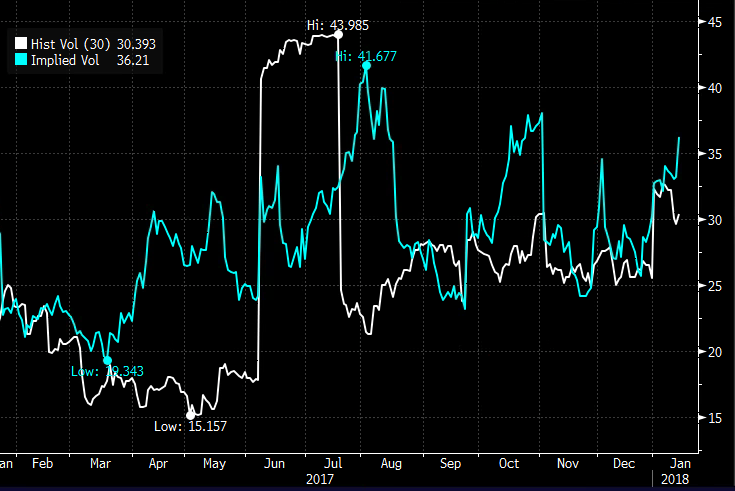 Rationale: While this trade could also serve as a decent short-biased trade looking to offset high levels of implied vol into the print, it is also a low premium way to mitigate against a 10% drop in the stock over the next month. It is important to note that the hedge is not unlimited and protection begins to trail off below 165 and actually stops at 153, where the entire loss is realized. So this is only for those looking to protect against a very defined potential drop and who are looking to limit the amount spent. For those willing to spend a bit more a straight put spread would make sense.