Stocks in the U.S. seemingly make new highs daily. The S&P 500 (SPX) is already up 3.35% on the year, I suspect one of the best starts to a year in a while. Headlines in the financial press routinely site very bullish investor sentiment, as one might expect, but also highlight the fact that stocks are at very “overbought’ levels, which sounds scary, but as this pundit explained last month on CNBC, that is not always as scary as it may seem, watch here: 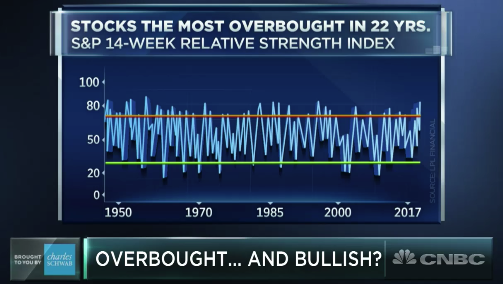 The chart above shows the relative strength index (RSI) on the SPX at 22-year highs (as of Dec 22nd), but as the pundit highlights, the index has had that readings this high on 13 times since 1950, and on year out from each the market had been higher 12 times. So the point is simple, you might have a correction at any moment to work off some near-term exuberance, but history shows that extreme overbought conditions do not usually foretell market crashes.

What’s different this time? Well how about the fact that the S&P 500 might be in its longest post-war period without a peak to trough decline of more than 3%, I think topping over 400 days, coupled with a period of record low volatility and an epic number of more than 75 new all-time highs during that period. We might be reaching a blow-off phase: 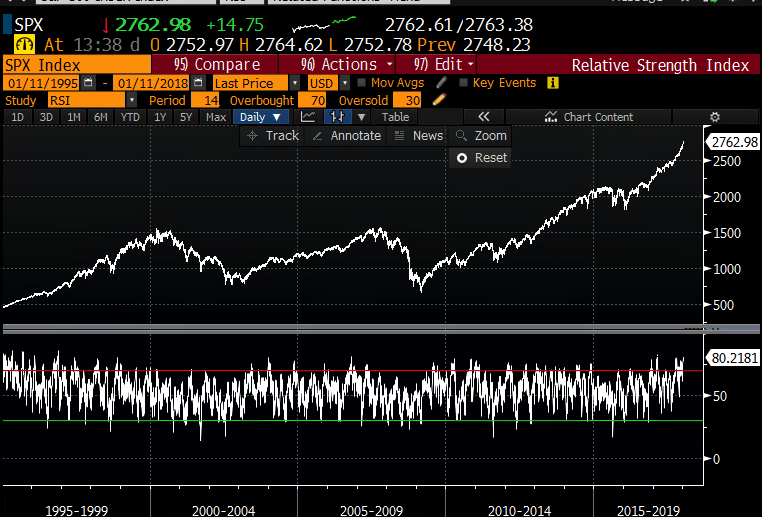 Some U.S. stocks are crashing up in a way that I have not seen since prior to the market top in 2000. Who would have thought that stocks like Boeing (BA), up more than 100% in the last year, are the ones displaying irrational exuberance? 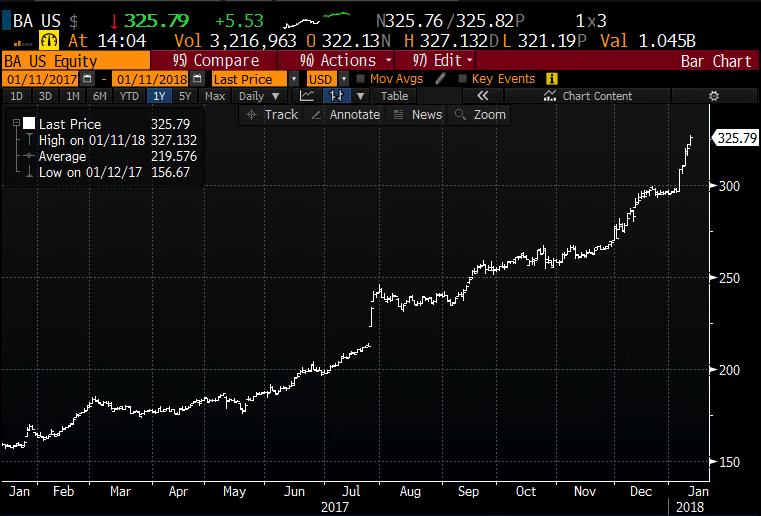 At this point, it is hard to find too many important stocks in the U.S. that are displaying any investor fear. While perusing some mega-cap stock charts I noticed the relative under-performance and recent weakness of one of the largest stocks in South Korea, Samsung, which happens to be an important component supplier (about 6% of sales), and competitor to the company with the largest market capitalization in the world, Apple (AAPL). Shares of Samsung are down 15% since making an all-time high on Nov 1, having closed last night at what might prove to be a precarious technical support level: 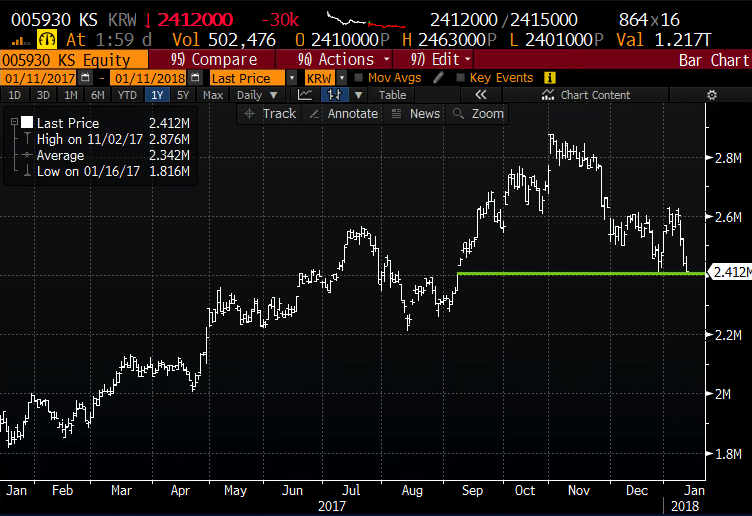 What’s interesting to me about Samsung is that the stock’s recent performance might reflect some trepidation from investors in South Korea about issues that U.S. investors have yet to discount, namely foreign relations between the SoKo and NoKo, foreign and trade relations between the U.S and SoKo and most importantly foreign relations between the U.S. and NoKo, especially in front of next month’s Olympic games in SoKo. Additionally, while expectations for Apple’s iPhone sales in December are high and likely to meet, they are likely to come at Samsung’s expense. Additionally, the growing expectation that Apple’s iPhone units are too high for the March quarter could also come at Samsung’s expense as a key component supplier and what might be a worse than a weaker seasonal period.

A week guide by AAPL when they report their fiscal Q1 results on February 2nd could send the Smartphone supply chain into a bit of a tizzy, and Samsung might be one of the few stock’s on the planet that may be signaling a warning sign.

Your guess is as good as mine as to what is likely to start the first real sell-off in over a year, but I suspect it will be a confluence of events that might start in February… concern over global monetary tightening as Janet Yellen exits as Fed Chair and without some sort of exogenous event, it will probably take some sort of high profile earnings disappointment from a company like AAPL that has the potential to filter through other parts of tech. At this point I am sitting on my hands, hoping bitcoin goes back up 😉

But we will revisit this in the coming days for those looking for portfolio hedges.