Back in May of 2015, when Avago (AVGO) offered to pay $37 billion for Broadcom (BRCM), not only was it the biggest semiconductor deal to date but the largest technology merger ever. That deal came early in an M&A cycle within the semiconductor space that saw large players scramble to latch onto faster growing businesses more levered to emerging technologies like the Internet of Things, Artificial Intelligence / Machine Learning and Autonomous Driving. Here are a handful of the blockbuster m&a in the space since 2015 that have equaled more than $200 billion in total:

ARM Holdings (ARMH) of the U.K. agreed to be acquired by Japan’s Softbank for $32 billion.

Intel (INTC) bought Altera (ALTR) for $17 billion in all cash

Its the last announced deal, and the only one on the list above that has not closed, that I want to look at today. Readers might recall that AVGO made a hostile $100 billion bid for QCOM, that QCOM rejected earlier in the fall. BRCM wants both QCOM and NXPI and are preparing to make the case to QCOM shareholders. You know the drill, scale, synergies and better penetration in key customers like Apple (AAPL), who QCOM has had a tough go of with of late.

Wall Street analysts seem giddy about the prospects for the mega-deal with 27 Buy ratings, 1 hold and NO Sells, while investors seem not too bothered whether a deal happens or not, with the shares up 50% in 2017, down about 7% from its all-time highs made last month, but generally down in sympathy with the group. Despite those eye-popping ytd gains, the stock’s rise has proven to be quite orderly with a few consolidations that have always yielded higher highs. The stock has now just checked back to its earlier breakout level which happens to intersect with the uptrend that has been in place since it’s January lows: 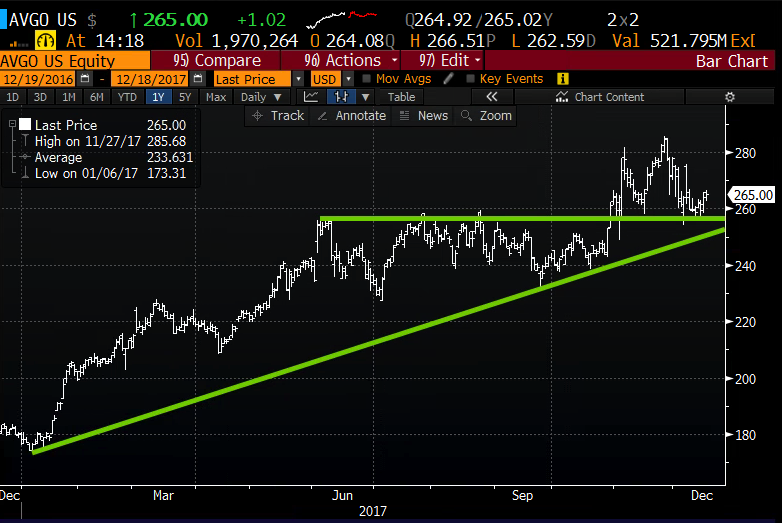 AVGO is a cheap stock, trading 13.6x expected 2018 eps growth of 21% on 18% sales growth. If the company were to make headway with QCOM, even if they were to have to sweeten their bid a little, I suspect shares of AVGO would trade higher given the prospects for cost synergies.

If I were inclined to play for new highs in the new year, I might look to finance longer dated upside calls by selling shorter-dated ones, a call calendar like I did in Intel (INTC) on Friday, read here.

So what’s the trade? At the moment it appears that 2017 will end on a high note, assuming the tax bill passes both houses this week, is signed next week and the Ds & Rs reach an agreement on funding the government. This could set up for some profit-taking in the first week or two of the new year, but that might prove to be a blip, which might lend itself to trade structures like call calendars for traders lookign to reload on long ideas:

Break-even on Jan expiration: This trade does best on a gradual move to the 280 strike. If the stock is below 280 on Jan expiration the short Jan call will expire worthless and I will be left long the March 280 call for $8. At that point, I could look to sell and out of the money call in March expiration making a vertical call spread and further reduce my premium at risk.

I am targeting March expiration as it will catch AVGO’s Q1 earnings that are estimated to be in the last week of March. Risking 3% of the stock price to possibly own a call just below the prior high with 3 months for the idea to playout.