Despite FANG stocks getting most of the positive headlines in 2017 as it relates to technology outperformance, Semiconductor stocks, measured by the SMH, the etf that tracks the group has outperformed the Nasdaq meaningfully ytd, up 37% vs 28%. But the outperformance has narrowed in the last few weeks, with the SMH down about 7% since the last week in November, when the fever appeared to break in the hottest stocks in the group, Nvidia (NVDA) and Micron (MU), with both stocks down a little more than 10% in that time period. Next week’s fiscal Q1 earnings report, and more important the stock and the group’s reaction to the results might be very telling as to how investors view this group potential for continued outperformance in 2018.

The options market is implying about a $3.70 move in either direction following MU’s results, or about 8.5%, which is essentially the average one-day post-earnings move for MU over the last four quarters, but well above the 10 year average of about 6.5%.

While MU is a fairly cheap stock, especially by tech stock standards there has been a fairly evident rotation out of growth stocks (most with high valuations) into value. Today’s price action in MU vs Intel (INTC) might be a hint of how this rotation plays out a bit into 2018. For the better part of 2017 I was bullish and had long exposure in Intel (INTC), read here, here and here. While I have not been involved in the name since the stock’s Q3 results which capped an epic breakout after an already sharp rally since the summer, the recent pullback from the highs might provide a good long entry for the stock.

The next identifiable catalyst for INTC will be its Q4 results on Jan 25th after the close. But first lets recap the primary reasons for my bullish view earlier in the year:

INTC was at the forefront of the personal computing and internet revolutions in the 1980s and 1990s, but for all intents and purposes missed the mobile boom of the 2000s. They seem hell-bent not to miss what comes next.  Before the MBLY deal, INTC paid nearly $17 billion for Altera in 2015 to diversify away from the PC market and create a footing in emerging technologies broadly described as the Internet of things (IoT). Then last summer INTC paid $400 million for Artificial Intelligence chipmaker Nervana, at the time, Intel vice president Jason Waxman telling Recode:

the shift to artificial intelligence could dwarf the move to cloud computing. Machine learning, he said, is needed as we move from a world in which people control a couple of devices that connect to the Internet to one in which billions of devices are connecting and talking to one another.

Put those three deals together, equaling more than $32 billion in cash, about 20% of their current market cap and 50% of their expected sales this year, and you get the clear sense that this is not founder Gordon Moore’s Intel anymore. BUT current management is clearly well aware that applying Moore’s Law to the emerging technologies they are so aggressively investing in could yield returns at a sort of exponential rate. What investors in the near term will have to grapple with is just how much they are overpaying for MobilEye, and now much they might have overpaid for Altera. That said if Nervana’s technology were to be able to augment or be embedded with that of Altera and or MobileEye than it might end up justifying the purchase price of the others.

Investors will be looking to INTC’s Q1 and 2018 guidance to confirm that these investments and refocus are paying off. Shares of INTC trade at 13x earnings for a reason, analysts expect earnings growth to be flat in 2018 on low single-digit sales growth. If investors have confidence that eps and sales could grow double digits again this stock will be rerated, at least to a market multiple.

So what are the charts showing? lets look at three different time frames to help identify near and long-term support and resistance:

First, one year, the stock tested and help the breakout level from late October: 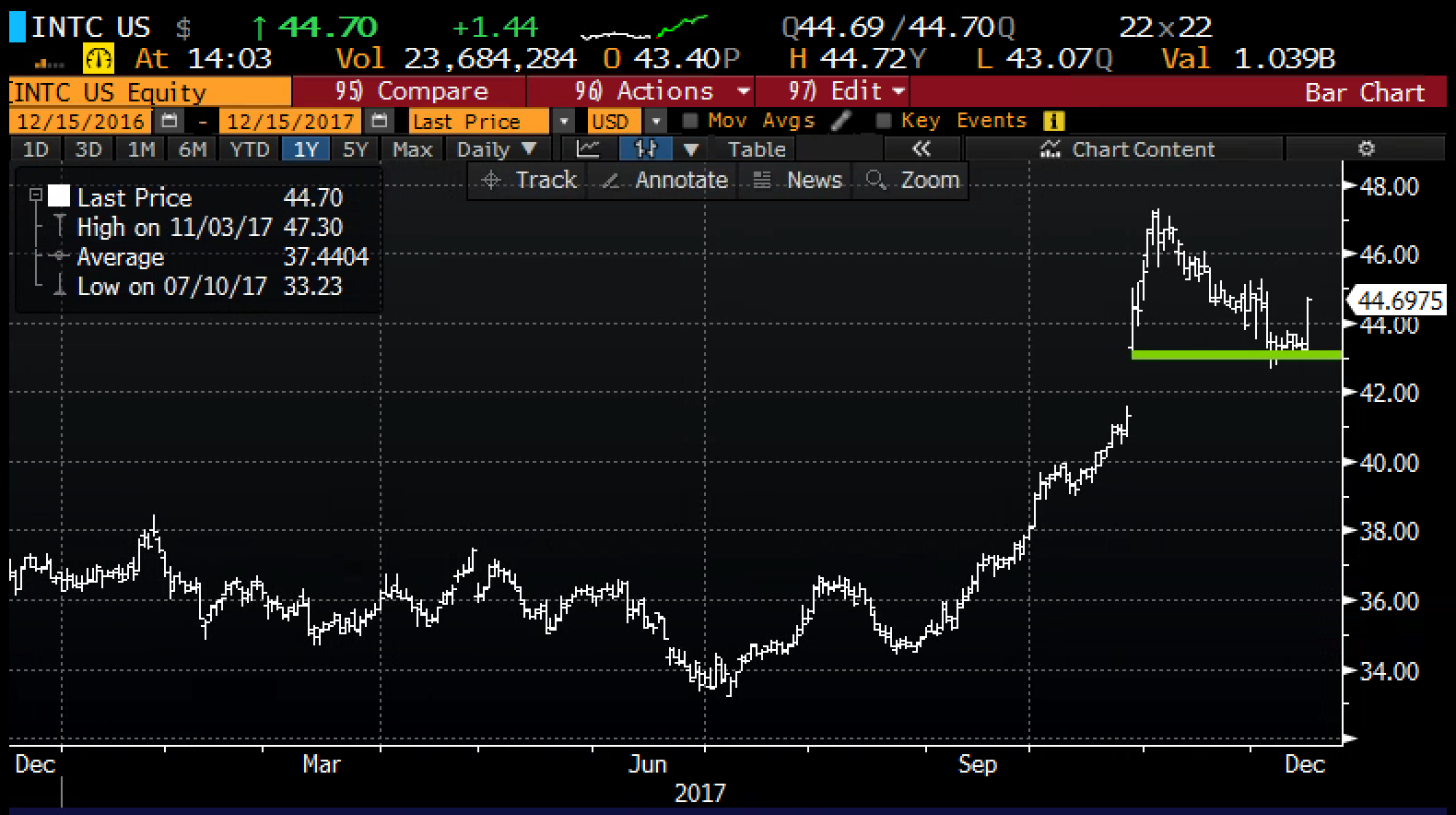 Second, a gap fill might be in the cards back towards $40, but that breakout in Sept should serve as epic long-term support for some time to come. 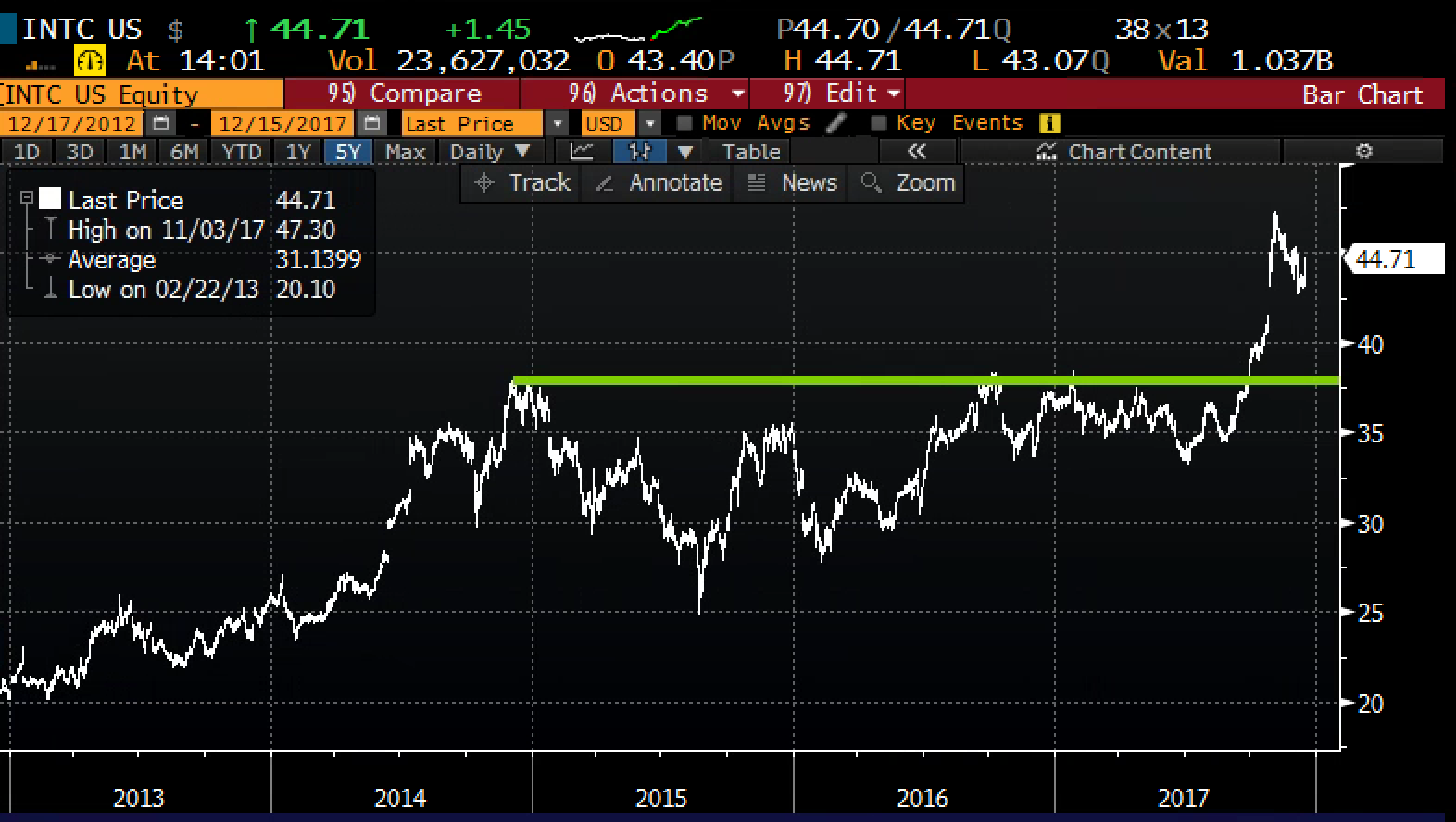 And lastly, on a twenty-year basis, confirming the intermediate support at $38/39, while also showing little to no overhead resistance up until $50: 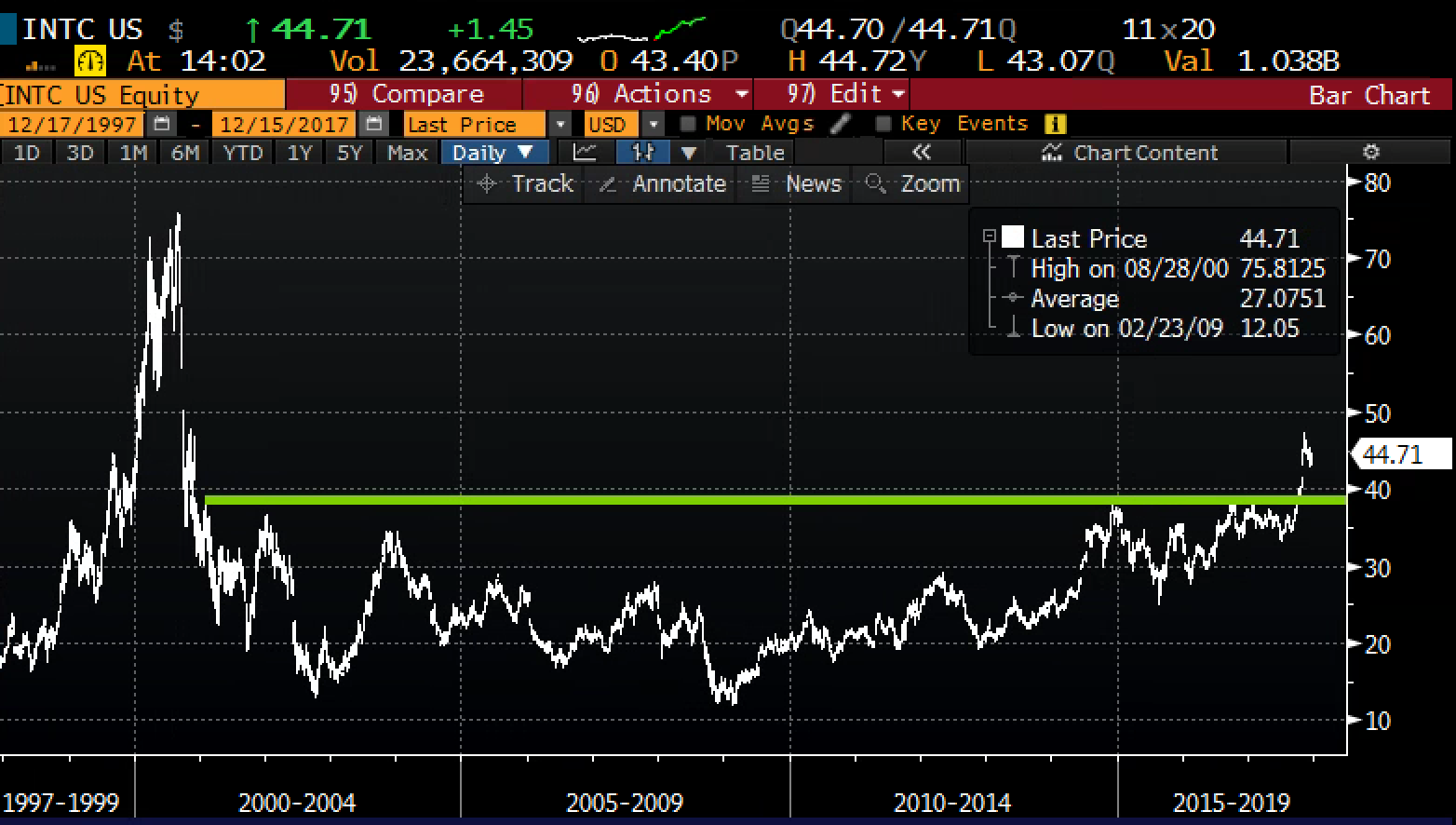 At this point, the prior 52 week high looks like a decent near-term target, but could be a place prior to the earnings catalyst the stocks sees some resistance. For those that think the Jan 25th Q4 earnings announcement might serve as a positive catalyst and think the stock has plenty of room to run in 2018, then selling short-dated calls that don’t catch earnings to help finance longer dated calls that do makes sense:

Break-even on Jan expiration: This trade does best on a gradual move to the 47 strike. If the stock is below 47 on Jan expiration the short Jan call will expire worthless and I will be left long the Feb 47 call for only 50 cents. At that point, I could look to sell and out of the money call in Feb expiration making a vertical call spread and further reduce my premium at risk.