Oracle (ORCL) reports their fiscal Q2 results Thursday after the close. The options market is implying about a 5% one day move on Friday or about $2.50 in either direction, which is shy of the average of just below 7% over the last 4 quarters, but in line with the 10-year average.

In mid-September the day following ORCL’s fQ1 results, the stock dropped 7.7% on investors concern with sales in the cloud, per BusinessInsider:

Oracle forecast its cloud revenue would increase between 39% and 43% in the quarter. That may be fast-paced, but it would represent a slowdown from the 51.4% pace at which its cloud revenue grew in its just-completed first quarter.

Oracle has been struggling to catch up with Amazon and Microsoft in cloud services, and investors have been closely scrutinizing its efforts.

The company also predicted that its per-share earnings in the second quarter will be between $0.64 and $0.68. Prior to the report, analysts were predicting the company would earn $0.68 per share in the period.

The disappointing news from Oracle may be partly a result of expectations that had gotten too high. Things were looking good for the company in June when it reported its cloud revenue in its fourth quarter had grown 58%. That spurred analysts to boost their price targets for the company’s stock to $54.84 per share.

This tweet from CNBC’s Jim Cramer caught my attention this morning, largely because he is a massive bull on SalesForce.com (CRM) one of ORCL’s largest competitors, helmed by Marc Benioff, a former ORCL exec: 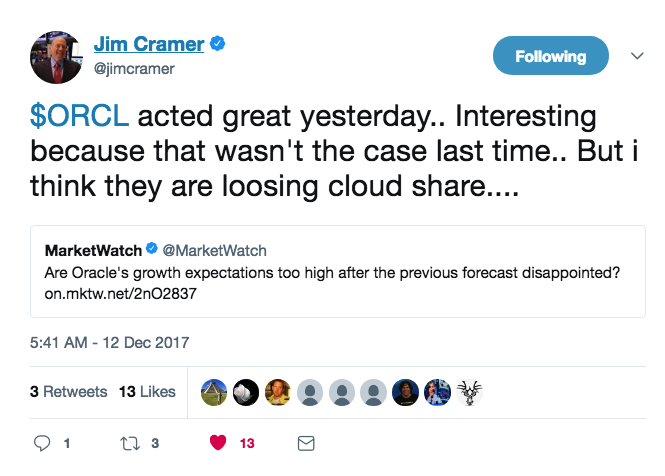 If ORCL were to disappoint in the cloud for a second consecutive quarter in a row, the stock would easily be down in line with the 5% implied move which would place it right back at $48, which happens to be key technical support, a level it has bounced from on four occasions since August:

In a note to clients last week, Credit Suisse’s ORCL analyst who rates the stock a Buy with a 12-month price target of $62 highlighted what he called “Constructive F2Q Field Checks: 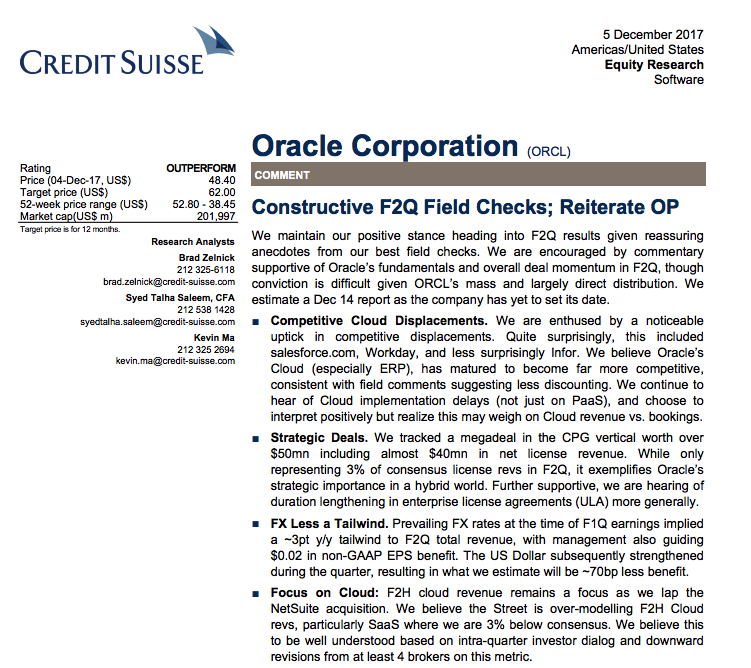 So what’s the trade? If I were inclined to play for a cloud miss and at least a retracement of this past week’s move, which is also in line with the implied move and near-term technical support, I might consider the one if the following two trade ideas:

Or if I were inclined to play for a larger and more sustained breakdown than the implied movement I might consider a wide put spread in January:

I won’t bother to offer a bullish trade, if you think the company beats and raises guidance than it will most definitely make a new 52 week and all-time high above $53.14, so you know what to do, just buy calls or call spreads!!