It has been a tale of two cities for retail stocks in 2017… you know the drill, Amazon.com (AMZN) was killing everyone but home improvement behemoth The Home Depot (HD) because of their perceived moat, and Walmart (WMT), whose e-commerce efforts investors came to view as real. As for the rest of the names in retail, it’s mostly been a bloodbath. That was, until very recently. The XRT, the S&P Retail etf has rallied 16% in the last month, placing the etf up 2% on the year. I suspect this move came from a capitulation of poor sentiment coupled with investors rotating in the last few weeks out of growth into value. Essentially, this group of oversold stocks got swept up in this enthusiasm for tax cuts.

One stock that has been leading the way in this retail rally is been Costco (COST) which is up 22% in the last two months, making new all time highs this week, with the recent gains representing all of its year to date gains. What’s interesting to me about COST is that the stock’s run started two days after its 5% gap lower following its disappointing Q4 results on Oct 10th:

It’s worth noting that the stock’s Q4 gap on Oct 11 was the result of commentary regarding their competition with Amazon Prime for their membership offering and costs associated with same-day grocery delivery, per CNBC.com: 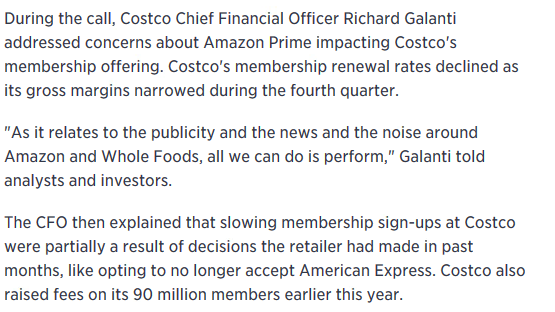 I’d be shocked if these issues abated in such a short period of time. COST reports FQ1 results after the close Thurs Dec 14. The options market is implying about a $7 move in either direction or 3.7%, which is in line with the avg move over the last 4 qtrs.

So what’s the trade? The stock’s recent rally might not be reflective of the company’s growing fundamental challenge from AMZN, and trading at 29x expected fiscal 2018 eps growth of 11% on 7% expected sales growth, the stock looks priced for perfection. If you were inclined to play for a pullback I think it makes sense to target the recent breakout level as a breakdown level, near $185, and target support near $175: 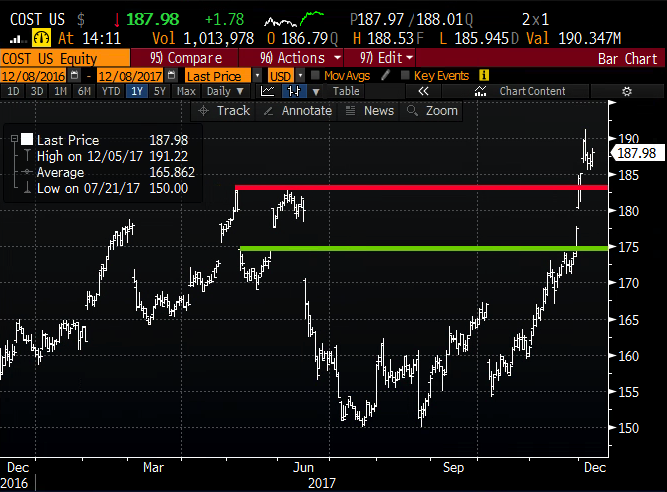 Rationale: risk less than 1.5% while offering profit potential of up to 4%. This is going against the recent trend but offers good risk reward on a potential pullback into the catalyst event. A sentiment swing that rapid from realistic concerns earlier in the year is strange and is probably a “too far too fast” situation.