Over the last two weeks, we have seen a rotation into some 2017 laggard sectors like Consumer Staples, Retail & Transports, with all three sector etfs that track these three groups (XLP, XRT & IYT respectively) all up about 10%, despite still lagging the ytd performance of the S&P 500 (SPX). Most of these three groups gains on the year have come in the last couple weeks:

Investors have begun to take profits over the last week in tech growth stocks with high valuations like semiconductors, cloud and internet stocks which have had dramatic outperformance year to date. I guess this all makes sense except for the fact that I would have guessed that investors would have done their best to hold onto these outperformers until the start of 2018, a year that is more likely to have lower tax liabilities for most investors given the recent news.

On Friday I detailed a near-term bearish trade idea on the SPY (read here) the etf that tracks the SPX, and discussed on Friday’s Options Action on CNBC, click below to watch: 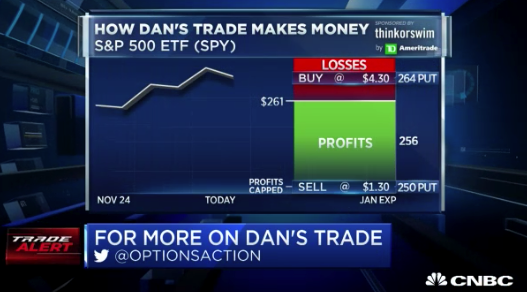 While I am comfortable with this trade in the SPY, even with today’s new all-time high following the Senate’s weekend passage of tax cuts, it might also make sense to take a similar near-term bearish view in the Nasdaq 100 (QQQ). The intent of this idea is not to double up on a bearish bet in the new year, but guessing which etf might offer the most bang for its buck. In the case of the QQQ, the top five holdings Apple (AAPL), Alphabet (GOOGL), Microsoft (MSFT), Amazon (AMZN) and Facebook (FB) combined makeup 45% of the etf’s weight. The QQQ is only 1.5% from the all-time high it made last week, and while the extreme weakness in semis might suggest more pain to come in high growth / high valuations in tech, these top holdings are likely to put a up a decent fight between now and year-end to maintain their outperformance. Near-term I might guess that $150 could serve as technical support, the intersection of the late October breakout to new all-time highs and the one-year uptrend:

So what’s the trade? If you are looking for some protection in mega-cap tech in the near year, a period that might see some selling after this group dramatically outperformed the broad market, then it might make sense to sell short-dated put premium in the QQQ to help finance longer dated put premium.

Break-Even on Dec 29th expiration: This trade performs best with a gradual move towards the 149 strike over the next few weeks. If the QQQ is at or above 149 on Dec 29th weekly expiration the short Dec 29th 149 put will expire worthless and the and the trade will be left naked long the Feb 149 put. If the QQQ is close to $149 then the Feb 149 put should have appreciated as it will have picked up deltas. At that point it might make sense to further reduce the premium at risk by selling a lower strike put in Feb turning the trade into a vertical put spread. The max risk of this trade is the $1.65 premium paid, and would be at risk with a large move above the current level, or well below the 149 strike.

Rationale – Selling a put to end 2017 to finance bearish exposure into 2017 makes sense as the best way to ride out days like today. The turn of the calendar year could mean a change in attitude, especially with new tax ramifications.